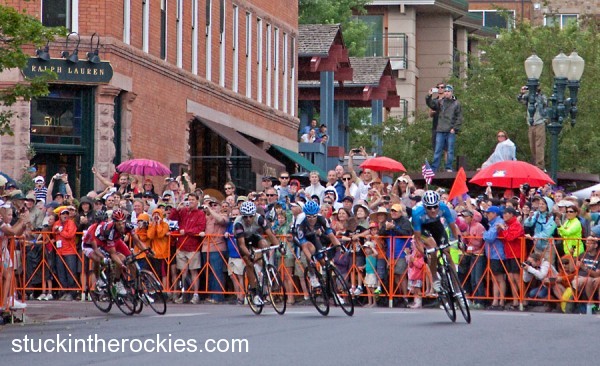 In what was one of the coolest new events to come to Aspen, the second stage of the inaugural USA Pro Cycling Challenge finished in town Wednesday. The 130+ mile course started in Gunnison and climbed over Cottonwood Pass before heading to Aspen via Independence Pass, where a reported 3000+ fired up spectators lined the road to the summit, giving it a feel akin to an Alps stage of the Tour de France. Christy and I weren’t able to be up there, so we watched from town and were completely blown away by the whole thing. Having watched hundreds of cycling race stages on television through the years, it was entirely new and totally impressive to see these top riders blast by in person. Hopefully it’s just the first of what becomes an annual event.

Here’s a sequence of shots as the front end of the race flew through downtown: 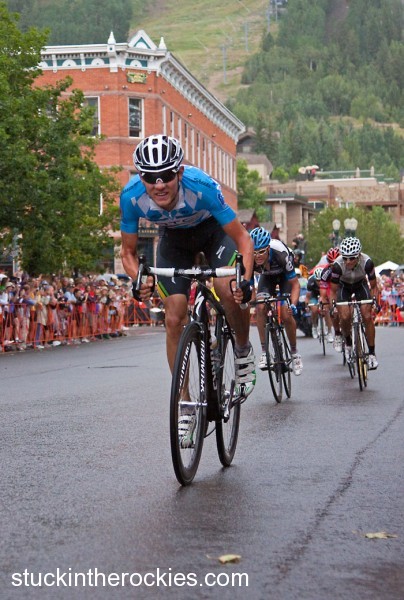 Tejay Van Garderen, at only 23 years old and with Aspen connections, has been wearing jerseys for “most agressive” and “best young rider” here and in this year’s Tour de France. He finished 2nd here, which earned him the yellow jersey as the new race leader. 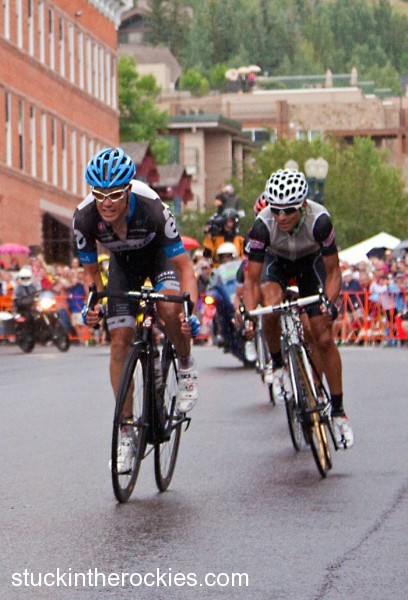 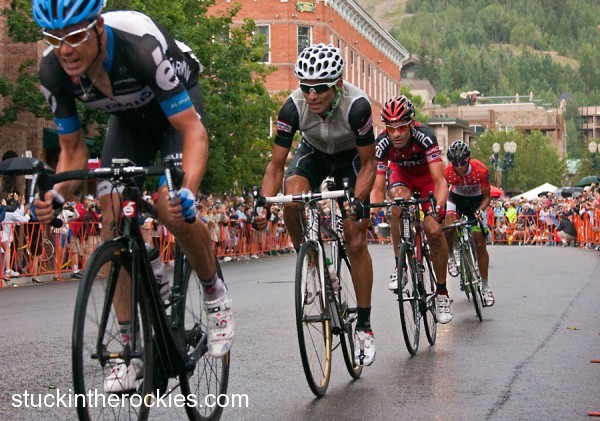 And right behind Danielson and Acevedo, 16 time Tour de France rider, George Hincapie, might look back and say he was right where he wanted to be. He took the stage win. 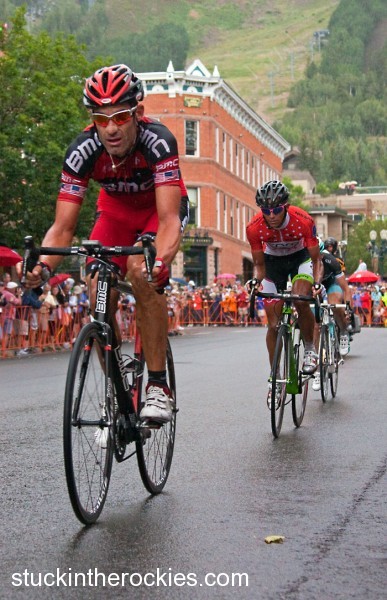 Despite the increasing speeds building up to the sprint finish– these guys were flying–  stage winner George Hincapie looks pretty relaxed, and Eduard Beltran, behind, looks like he isn’t even breathing. He finished 4th. 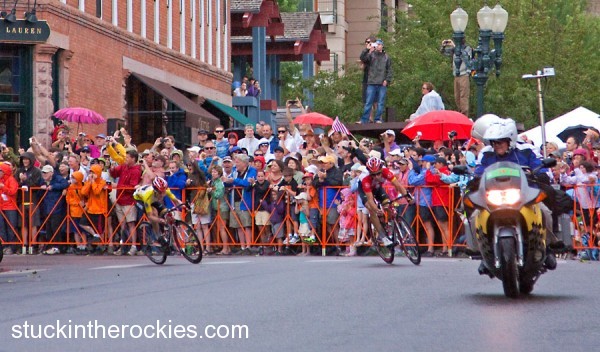 And here comes Levi, trying to hang onto yellow. He wouldn’t pull it off and finished 9th but did manage to keep the sprint jersey. Radioshack’s Ivan Rovny, to his right, dropped back to 16th by the time he crossed the line. 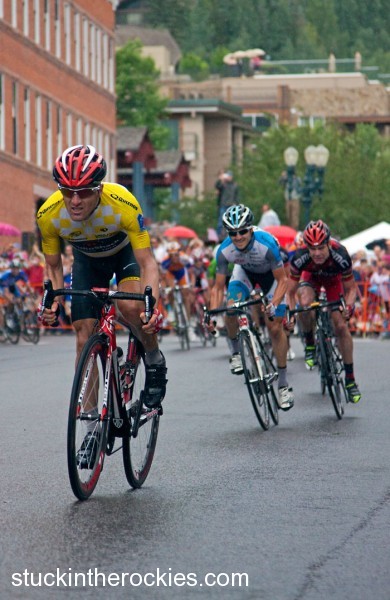 Leading the chase pack, Levi couldn’t close the gap. The chase group finished 45 seconds behind Hincapie and the leaders. 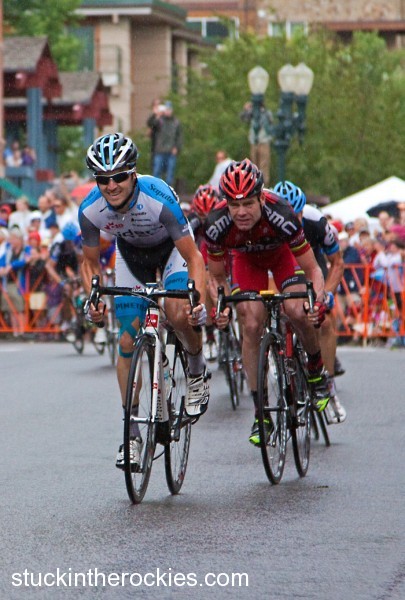 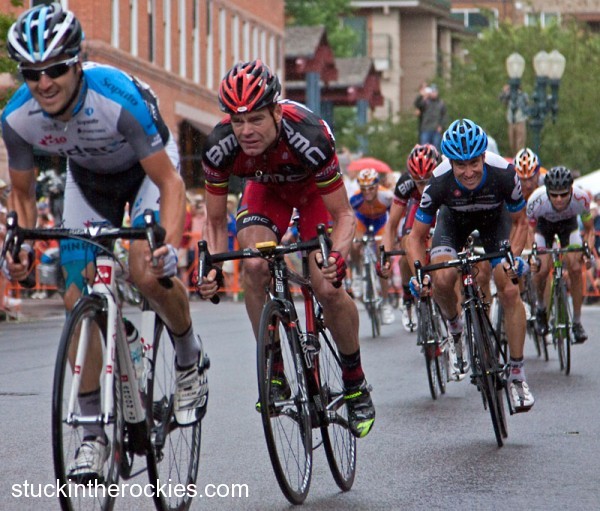 Cadel Evans finshed 7th, and a rather focused Christian Vandevelde follows closely behind. 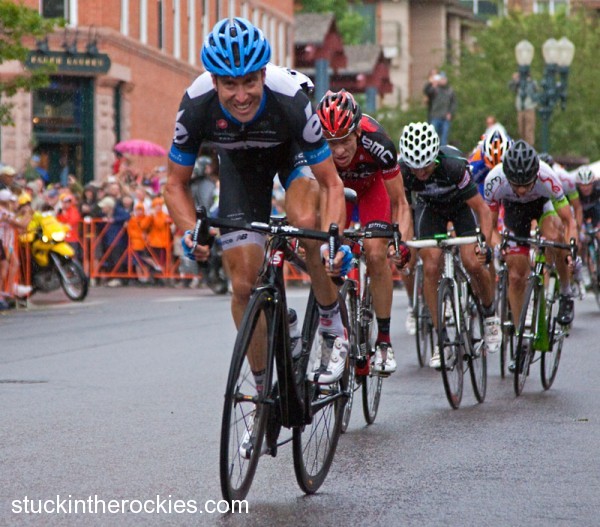 Vandevelde, BMC’s Jeff Louder, and the middle of the chase pack. 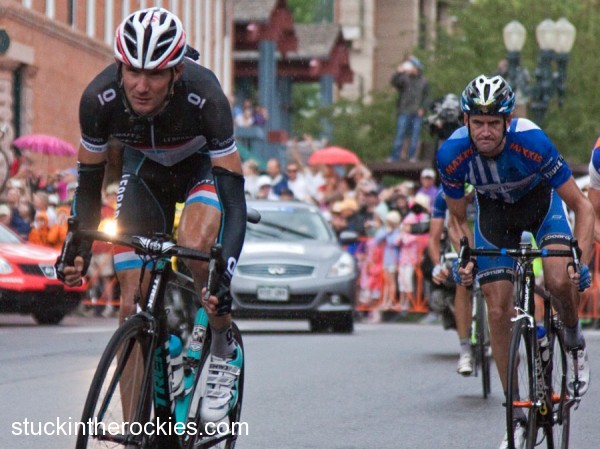 Frank Schleck finished 19th here, and looked ready to put the day and the rain behind him. United Healthcare’s Rory Sutherland (in blue) looked to share the sentiment. 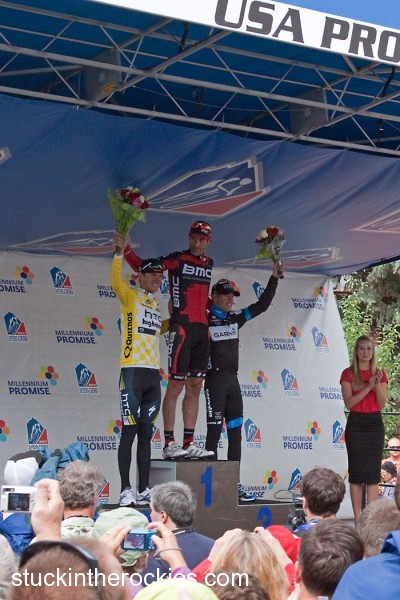 And the American’s sweep.Tee Jay Van Garderen, George Hincapie and Tom Danielson, (L to R) on the podium. 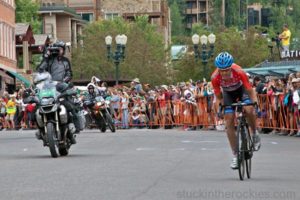 Hang on there buddy!

I’ve always preferred chasing to being chased. That’s why when[...]