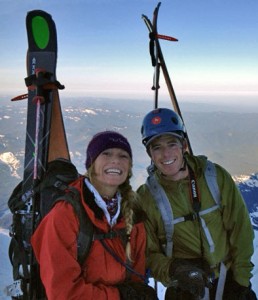 It took a little while, but I finally managed to get the trip reports from our 14er ski descents back online.

Back in 2008, I put together a crude website where I posted thoughts and photos from my 14er ski project. Unaware at the time the direction it all would take, my attention slowly shifted away from that site and towards this blog. Eventually the blog took up all of my available time, the original site on tedmahon.com was left behind, and with it, I lost those early reports of the ski descents though 2008.

In the five years since then, Christy also finished skiing the 14ers and put together her own separate list of descents. Some overlapped with mine, others were new (and often repeats for me), some were shared on the blog as they occurred, and still others went unreported. After I realized how many 14er ski days we had between us– 113 at my count– I realized I needed to consolidate it all. The old lists are coming down, and the new one will be posted on our header menu at the top of the page.

The table below lists all of the 14ers Christy and/or I have skied. Trip reports and photo slideshows can be linked to through each peaks name, and the date, route, and members of the group for each day are all listed. Some of the links lead to earlier posts we published, others are copied and rewritten from my old site, and a bunch from ’08-’12 are brand new. All-in-all I added nearly 90 TR’s to the blog.

And even though it may appear Christy and I have had our fill of 14er skiing, we’re not done yet. We still need to get Lincoln and Democrat to have done them all together as a couple. Maybe this spring. 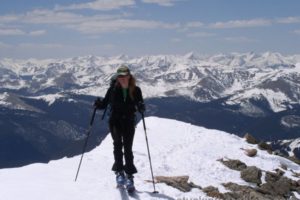 Wow that's quick. It can be one of the easiest peaks on the list.

Mount Bierstadt is one of the easiest peaks on the[...] 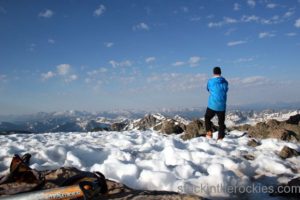 On the summit, a gorgeous July day.

On the summit, a gorgeous July day. Route: Cross Couloir[...]