Home RacesOut of the backseat at the Power of Four 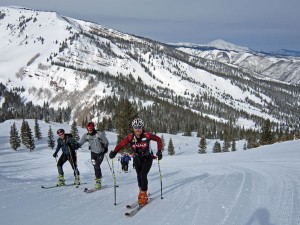 Lo Semple, rocking the fanny pack, on the second climb up to Burnt Mtn. after skiing the Hanging Valley Wall in the background. Click any image to enlarge.

That was fun. At least in a sort of “now-that-it’s-done” kind of way.

Seriously though, despite the sore feet and added challenge of having to finish on a broken ski, Christy and I both felt that it was one of the coolest things we’ve been a part of this season.

Kudos to the Aspen Skiing Company, who saw past the obvious logistical hurdles of an event such as this, and ultimately gave the green light to send 150 or so people on this huge tour of the four mountains on a busy weekend day. Between getting gated terrain open early, to allowing uphill traffic on Highlands on an already crowded Saturday, to OK’ing a race course that regularly hopped in and out of the ski area boundaries which would have burdened the ski patrol in the event of a rescue– there were likely a dozen reasons why they might have considered saying no to the whole idea, but they didn’t, and everyone had a blast. Hopefully this was just the first of a new annual event. 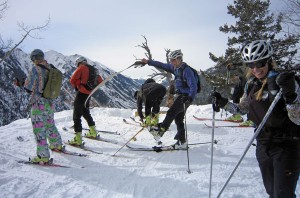 Neal pulls skins before descending to Buttermilk, a colorful Nick Devore and his partner Andy peer over towards Highland Bowl out to the left.

And man was it tough. Afterwards, my watch read 12,750 feet of vertical gain, and I later heard it measured in at about 27 miles. If you managed to get through the Snowmass and Buttermilk sections unscathed, to have to tackle the massive 4,400 foot Aspen Highlands climb just barely half-way into the course was a serious challenge to everyone, both physically and mentally. After the Highland Bowl descent, some 18 teams reportedly weren’t able to make the 2 pm Congo Trail cutoff, and they should maybe consider themselves lucky, because many considered the Congo leg to be the hardest descent. The meandering climb up Midnight Mine Rd. that followed was a seemingly endless slog, after which the moguls of Silver Queen were almost a welcome change. 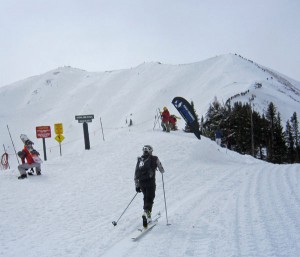 Almost done with the biggest climb of the day, Christy gets ready to get in the queue and start calling “on your left!”

At my count, thirty-seven complete teams finished, and we were lucky to be among them. I only say that because pretty early on, while flying down Tiehack, I booted out and crashed (on a groomed run no less) and when I stopped and righted myself, I had broken one of my skinny little race skis. I had snapped it right behind the heel, and though it was still attached, the tail of that one ski was useless. After managing to ski down and catch up to Christy, I wasn’t sure what to do.

I couldn’t easily replace the ski, and if I dropped out, then Christy’s day would be done too as you had to finish as a team. After hearing all our friends around us agree my race was likely over, one of them, Chris Lane, insisted I just keep going. Christy agreed, and not being one to want to drop out of things myself, and despite being just two and a half hours into it, I slapped on my skins and started up Highlands. 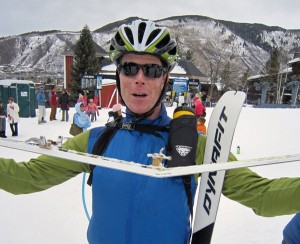 Now what? I was just glad to have stuck with it.

I couldn’t decide which descent would be worse with a broken ski– Highland Bowl, Congo or Silver Queen. With the obvious goal of staying out of the backseat, emphasizing the working ski and really pressuring the tip of the busted one, I made my way down the Bowl. Realizing then that the race wasn’t actually over for me, we took on the rest of the course and made it to Aspen, not only in reasonable time, but actually moving up in the field. We finished in 8:05, for a 3rd place co-ed finish. It was quite the adventure and I was really glad I didn’t throw in the towel. The full results can be seen on the COSMIC website here.

Hopefully I’ll be able to get a working setup by the Breck Five Peaks next month. And as for the busted ski, we may finally have our own shot ski for the condo now.

Apparently, the Skico was thrilled with it all, as was Race Director Pete Swenson, who sees this growing into a major event, even going so far as to say he thought it could be a potential contender for the 2013 World Championships. As for next year, there’s talk of offering staggered start times, so slower groups can begin a few hours before the elite teams, and everyone can make the cutoffs and finish closer together. Count us in! 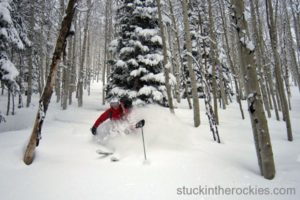 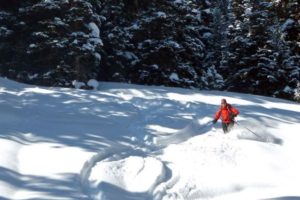 One fo the short descents. As the CAIC has noted, the upper layers have strengthened, while the lower layers have not. Once in a while we would punch through on our skinny rando skis. 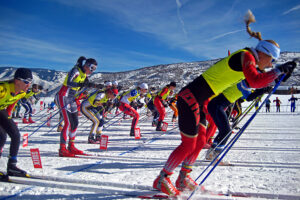