We started off the spring 2013 Centennial Skiing season with a trip to Atlantic and Pacific peaks. These two high 13ers, just south of Breckenridge, are part of the Tenmile Range and are easily seen from I-70 as it nears Copper Mountain. Access for peaks in this range is very good, with multiple trailheads and somewhat short approaches. And since these two peaks are connected by a high ridge, they’re a good pair to do together.

We opted to come in from the east, starting from the popular Quandary Peak trailhead and following the snow-covered road and the trail up McCullough Gulch. This part of the state is often windy, and as far as ski routes go, the wind-scoured west side of these mountains is often thin on snow and the east aspects can fill in nicely. As we made our way up the valley, we could see multiple ski lines on the easterly side of Atlantic Peak

We aimed for Pacific first though. It was straightforward skinning up to a high bench between the two peaks, and then up the South Ridge of Pacific to the summit. About six inches of new snow the night before made for some pretty fun skiing down the Southeast Face. We made a short skin up over a little ridge and then continued skiing down towards Atlantic. The weather was in-and-out at this point (there was a small storm forecasted to arrive), and we often found ourselves in mini squalls and high winds. The weather pounded us as we skinned up the North Ridge of Atlantic to a spot on its leeward side, and out of the elements.

The ski down Atlantic was awesome. The route off the summit was mellow-angled and powdery, after which we dropped into an east facing couloir that we viewed earlier that morning. The spring weather that we’ve been witnessing recently has done a lot to solidify the snowpack on these sunny aspects. After exiting the couloir we made good time back out to the trailhead.

Not only were these two descents a great way to start off the season for Christy and me, but would also be something we’d recommend to others in the future. The access is really good here, the approach is reasonable in effort, and the terrain is fairly moderate for what ski mountaineering can involve. Give Atlantic and Pacific peaks a visit.

Here are some more photos: 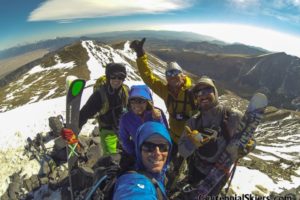 California Peak is a massive high 13er in the southern part of the Sangres near the 14ers Blanca and Lindsey. 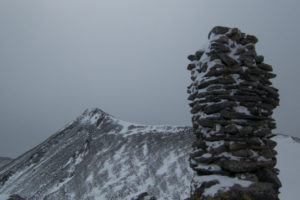 We began our spring 2014 Centennial Skiers season with Red Mountain.