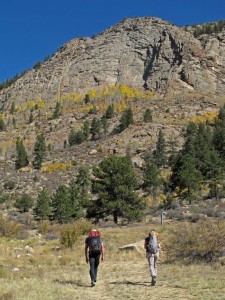 On approach, the route climbs the crack in the middle of the face. Click to enlarge.

Indian Summer has made an impressive run this year, and despite the calendar declaring it’s time to start snowing, it continues to feel like summer. Nearly everyday this past month has been marked by blue skies, cool temps and dry trails, welcome conditions for anyone looking to get outside.

Of course it will all change soon, and aware of the likely arrival of snow and cold temps in the coming days or weeks, Dirk, Christy and I decided to squeeze in one more warm weekend climbing trip. So we headed over Independence Pass, to Buena Vista and the Davis Face.

The granite face, located just a few miles northeast of Buena Vista, has quite a few climbing options with the main attraction being a five pitch trad route right up the middle. The published difficulty ratings all seem to agree the crux pitch goes at 5.9 and the majority of the route rates at 5.7-5.8. But with the crux moves confronted low on the second pitch and feeling harder than the published 5.9 (isn’t that how it always is?), you should be comfortable leading the higher end of these ratings or you might find your day ending soon after starting.

Continuing with the route beta, with the exception of the tree at the top of the last pitch, all the belay stations are bolted, and many of the middle pitches don’t run out a full rope– in fact two 60m ropes got us all the way down in just three rappels. The approach is straightforward, there’s ample car camping options along the road to the climb, and with the face catching sun most of the day, the temperature is pretty ideal for fall (or spring) climbing. Better yet, the afternoon T-storms which scour this area in summer aren’t really present this time of year.

It was a pretty cool day. Funny too, that when we first arrived we were kind of bummed to discover our planned camping spot had already been claimed by another party, who also happened to be on the route ahead of us. Putting that slight disappointment aside, we started up behind them and later realized, after they came rappelling by, that it was Al Beyer and Ruthie Brown, our friends from town. Suddenly it was just fine that we weren’t the only group there, and the five of us played on the wall together all day, and caught up over some beers at camp later. It only added to an already awesome outing. Here are some pics: 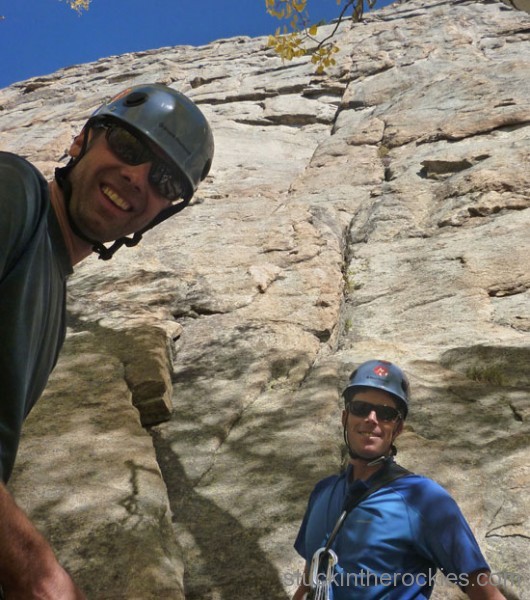 Ready to go, the route follows the crack up the face behind me. 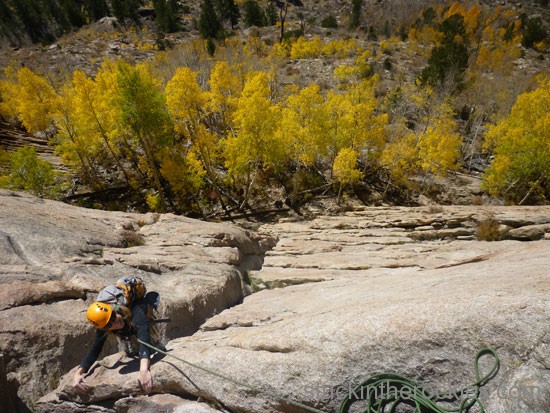 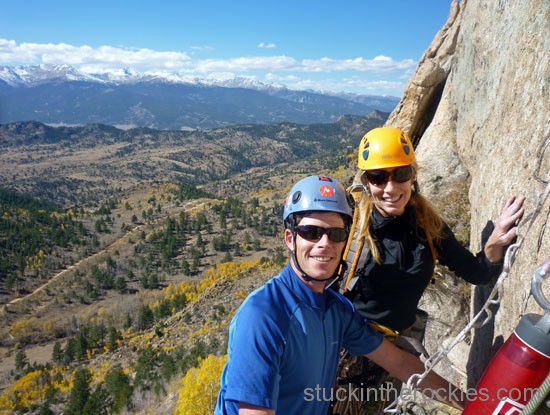 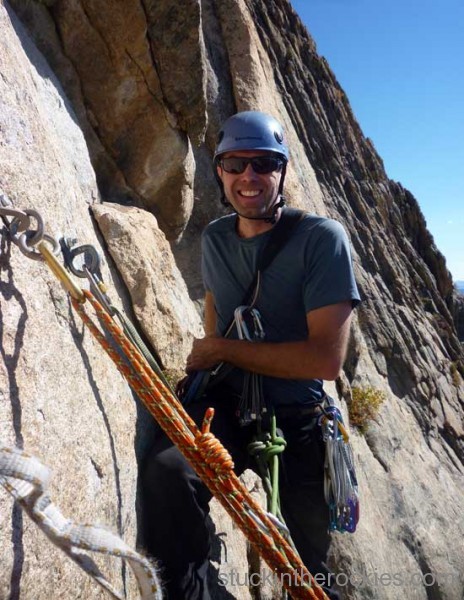 Dirk arranges his rack for the second pitch, the crux “roof” lead. 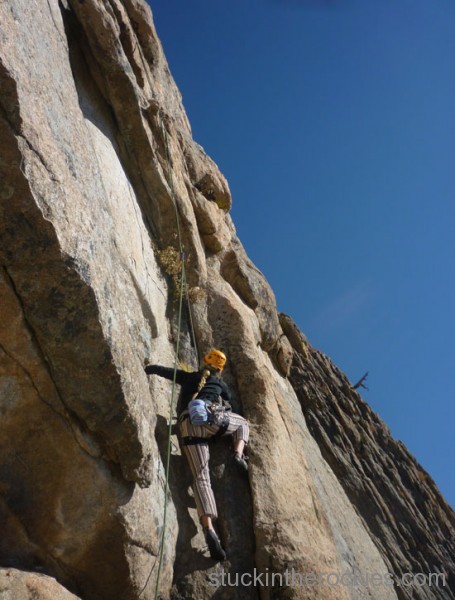 Christy follows, hoping not to crux out. 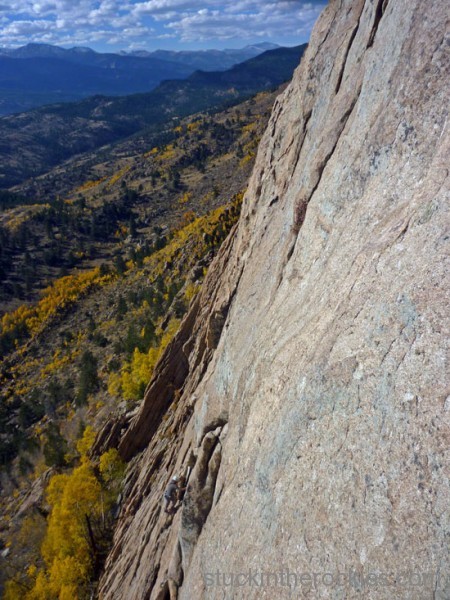 Al Beyer, on an adjacent route. 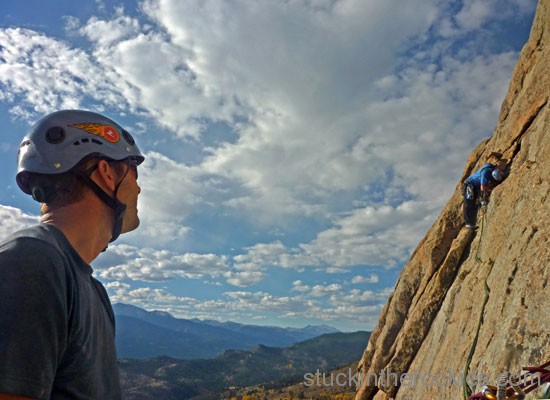 Pitch 4, after an airy no-pro traverse. 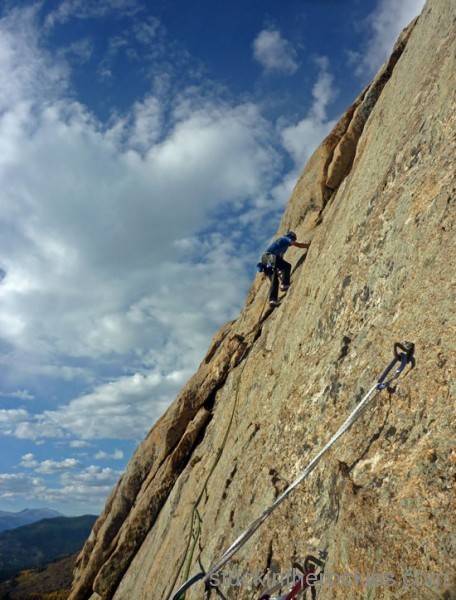 Making progress towards the dihedral above. 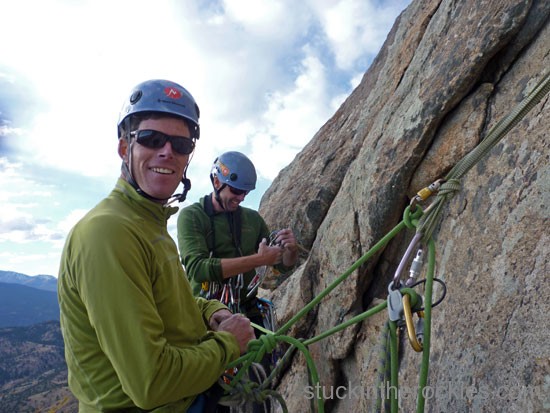 Swinging leads for the final pitch. 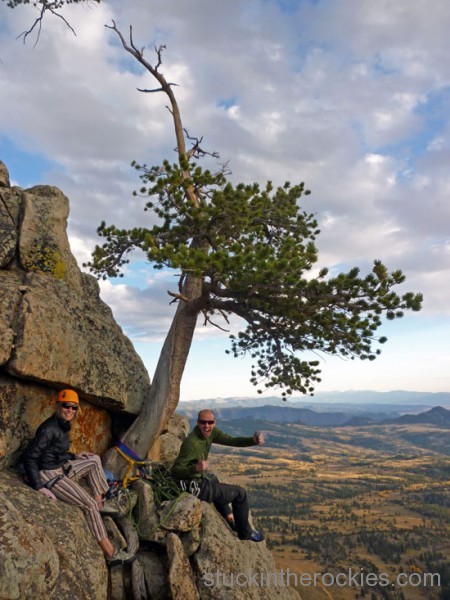 “Just happy to be here.” Dirk and Christy at the top. 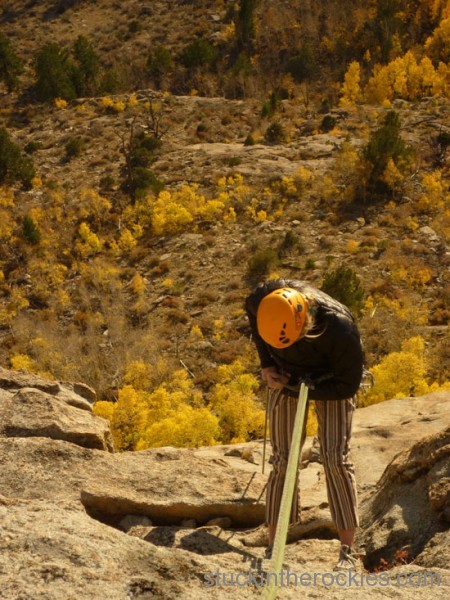 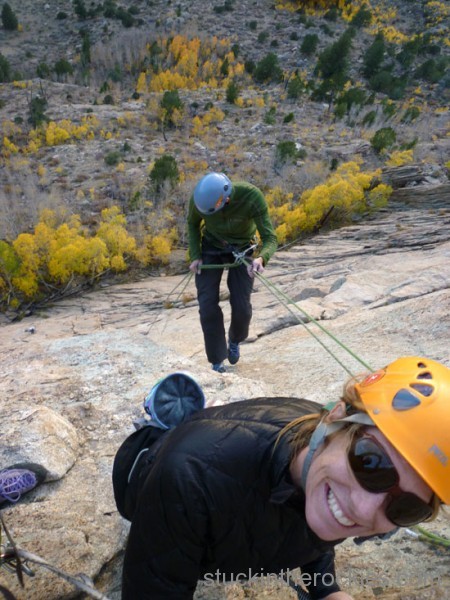 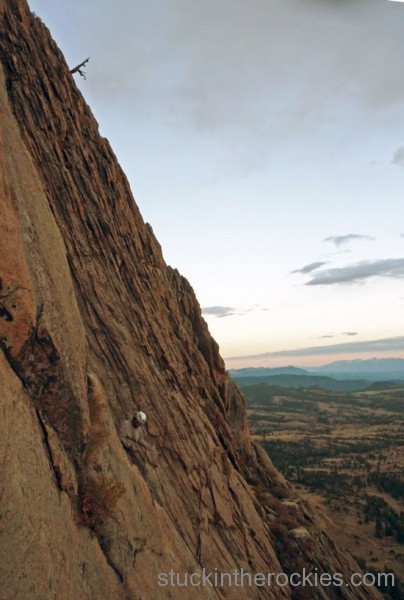 Al belays Ruthie up a different route nearby.

And now it can start to snow.