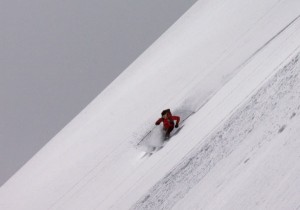 Well actually, skiing 13,300 foot Mount Daly is almost always a great day, as it was for us last Saturday. In fact, I think it would probably be a hugely popular Aspen objective, much like Mount Hayden, were it not for the drawn out approach.

So I say “grind” half-seriously, because the climbing and skiing is usually really fun and worthwhile once up in the basin, it’s just that more often than not, getting in and out can be a real grunt, sometimes feeling like the hardest part of the day.

It has a lot to do with the super-early starts needed to get up in the basin early enough in the day, that to get the necessary alpine start, you’ll be skinning in the dark timber through the late hours of the night, trying to navigate without any well defined trails and it’s just easy to get off route.

And maybe we’ve just had a bit of bad luck, but we’ve made the trip up West Snowmass Creek quite a bit, three times last year alone. It didn’t matter that Joey, Christy and I had been up there two dozen times between us in summer and winter, or that we had multiple GPS’s in use, whenever early starts were involved, we almost always managed to get off route, to some extent. Whenever we thought we were right where we wanted to be, we would soon find ourselves completely turned around, once somehow almost skinning in a complete circle.

So as usual, it was a bit of a chore to get in the four miles to the base of the mountain last weekend. As soon as we emerged from the woods though, and we were below the mountain itself, everything was great. We skinned all the way up through the Skier’s Couloir, switching to crampons for the last short steep bit and found the snow on the East Face to be awesome, for nearly 3,000 vertical feet to the valley floor. 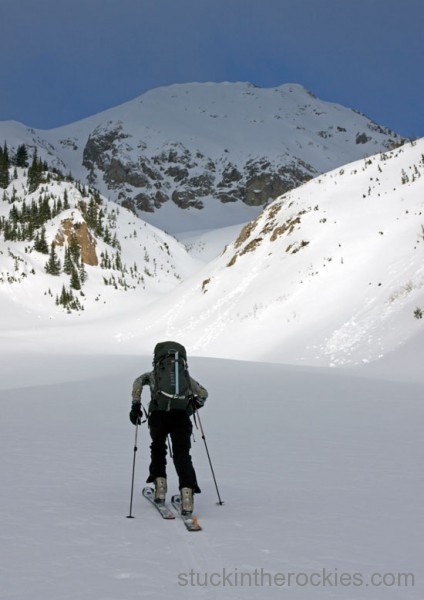 With the 4 mile approach finally behind us, it’s time to start thinking about skiing. 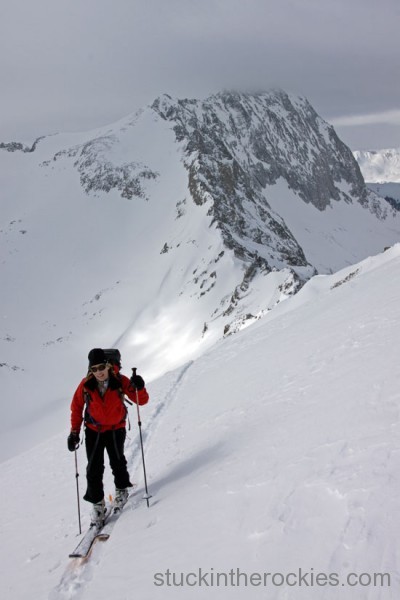 Christy below the top, with Capitol shrouded in the clouds behind. We actually skinned up the Skier’s Couloir, to within 30 feet of the top where a small wind lip forced us to switch to crampons. Last year, Pete Stouffer and Sean Shean skinned all the way to the summit. 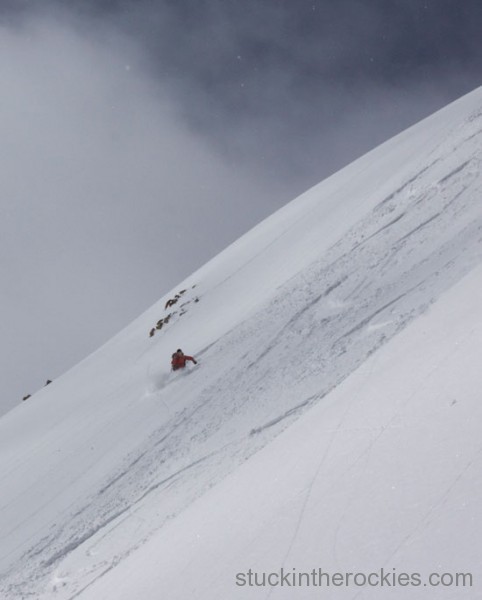 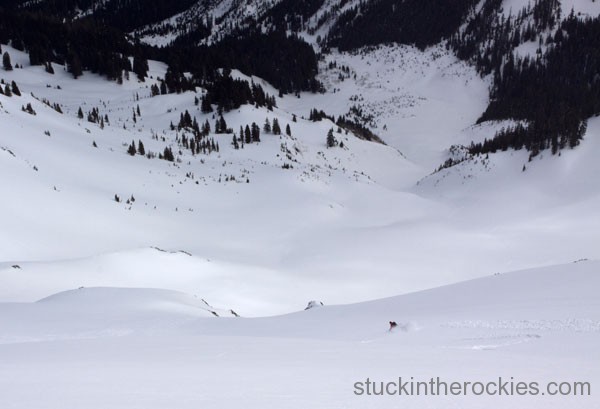 The off colored rock “stripe” seen in summer actually forms a sort of bench which takes you down and to the left and while it might look like a double fall line, is actually a pretty natural ski. 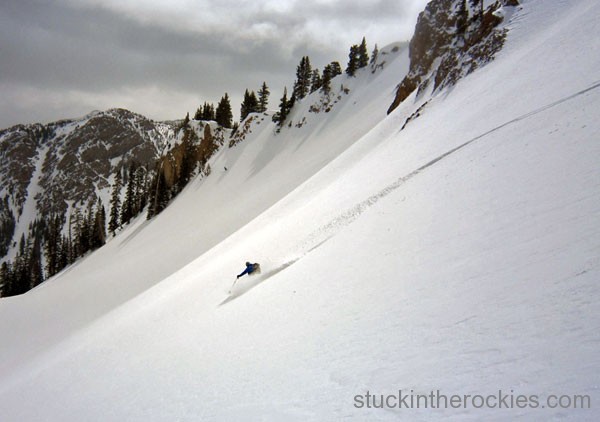 That’s me, off the upper face. Nice shot, Christy. 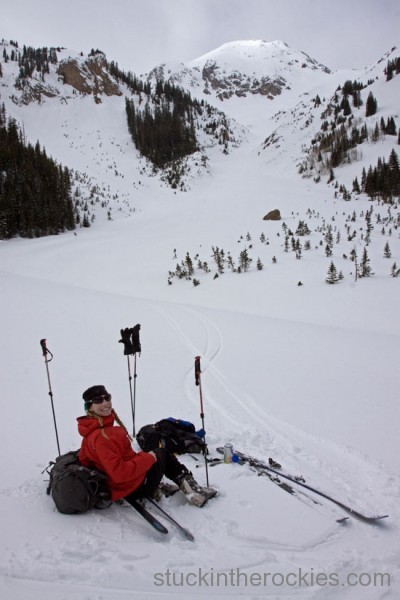 Daly has been on Christy’s wish list for a while now, so she’ll have to come up with a new one for next season. 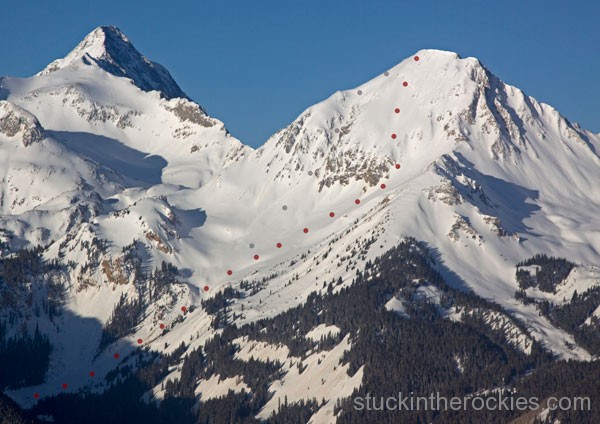 Last season Murray Cunningham took Christy and me for a recon flight of Capitol and Pyramid and I got this photo. The Skier’s Couloir, our skin route, is marked in light gray, and the ski descent in red.

And I’ll include these images from the day before, from up in some couloirs that fall off Pyramid Peak, simply because it was such a nice day. 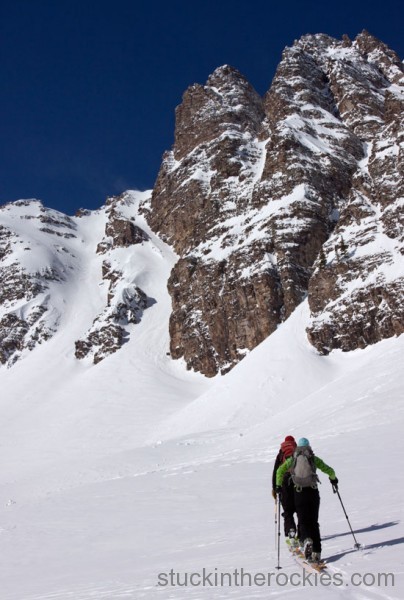 Joey and Lissa on approach. 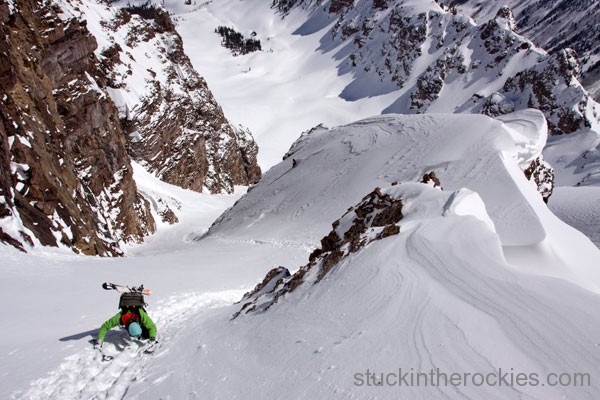 Lissa and the boot track. 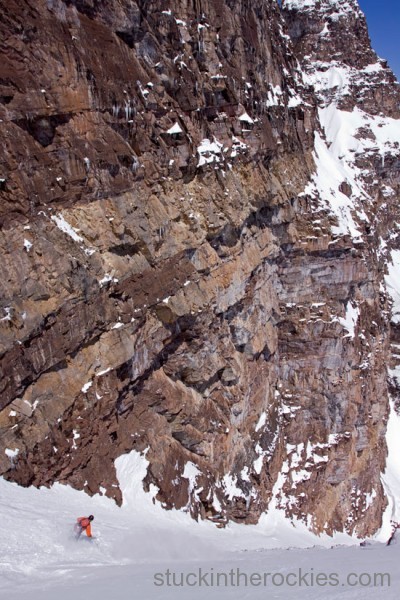 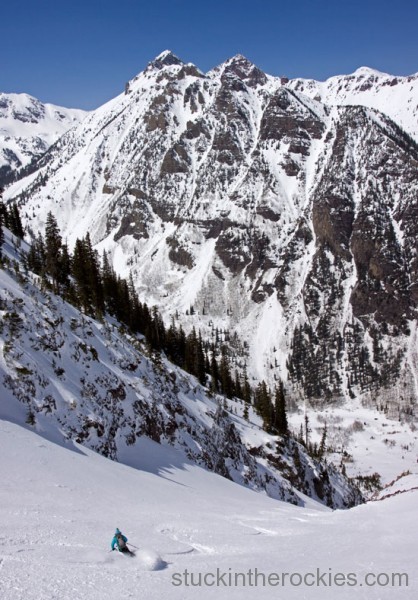 Lissa finds what she was looking for. 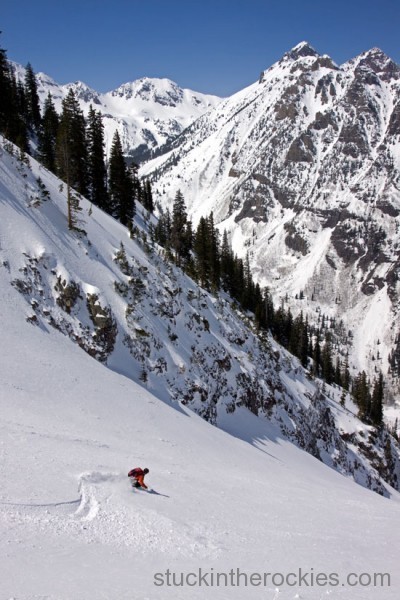 And Joey gets the parting shot. It was a fun day. 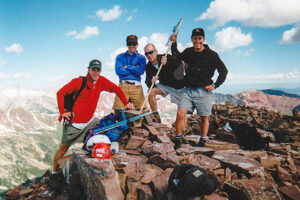 On the summit of Pyramid for Ted Mahon's first time back in 1997. He's in red; Scott Hicks is in blue.

Reflecting back on my first climb of Pyramid peak 25 years ago, alongside a recent climb with a friend.