As we ascended the final steps to the summit plateau, I moved aside to let Matt go before me. He walked along the crest of the narrow ridge, paying close attention to each foot placement, toward the high point a short distance away.

He stopped when he reached the spot where it was clear he could go no higher. After a brief moment to take in the expansive views, he turned towards me and, with a huge smile, gave me a high five. After years of gazing at Pyramid Peak from afar, he finally stood on its summit.

Matt commented about how he had always wanted to climb Pyramid but was unsure if he would ever get the opportunity, and he thanked me for leading him to the top. As we sat down on the rocks around the summit to take it all in, I could sense his satisfaction in being there. I felt the same sense of accomplishment, even though I had been atop this mountain many times before.

It was easy for me to relate. There was a time when I, too, wondered what it would be like to climb Pyramid. In my case, it was 25 years ago that I found myself, like Matt, following a friend up to the 14,018-foot summit of Pyramid Peak for the first time.

“Do you want to go up Pyramid Peak later this week?” my co-worker asked as we finished up our shift at Carnevale, an Italian restaurant on the Hyman Mall back in the 1990s. “I have a friend who knows the route and has offered to take us if you’re interested.”

I mulled the offer over for a moment and said yes. It was an easy decision for me. I had friends who climbed the mountain, and their stories made me curious about the experience. And as a rule, I always tried to say yes when invited on mountain adventures.

Following your curiosity often leads to novel experiences. But, sometimes, it can lead to much more. Saying yes and being willing to try new things can teach us about ourselves. It can present challenges that test us and reveal interests and passions we may not have known we possess. It can present new opportunities and broaden horizons.

Unbeknownst to me at the time, opting into this outing set me on a path I had never anticipated.

With a borrowed helmet and ice axe, four of us set out from Maroon Lake, toward Pyramid Peak. My work buddies and I followed our friend, Scott Hicks, up the mountain’s

Northwest Ridge. Scott knew the route and was the type of person who liked to share his knowledge — two useful attributes for anyone playing the role of guide.

We made our way up through the talus-filled amphitheater, ascending steep gullies and scree-covered faces, following a meandering route that would have been impossible to cover safely had it not been for Scott’s knowledge of the route.

For someone new to mountain climbing, I found it exhilarating. It was a physical challenge with brief shots of adrenaline amidst a stunning backdrop. It was Type II fun, though that term wouldn’t appear in the outdoor lexicon for many years.

I still recall the joy of topping out on the airy summit, surrounded by Elk Range peaks in all directions. I was so glad I said yes to the invite and was just as grateful that someone like Scott was willing to show the way.

The descent down the more common Northeast Ridge was straightforward by comparison. It’s more clearly defined and offers faster egress off the mountain. Back then, there was much more snow in the amphitheater, and I recall trying to emulate Scott’s demonstration of glissading down the long strips of snow that remained there mid-summer.

Soon enough, we were back down at Maroon Lake. The physical effort and the added rush from the exposure and loose rock left me mentally drained and physically exhausted.

I awoke the following morning feeling proud of our accomplishment and curious about other 14ers. The next thing I knew, I was at Ute Mountaineer in its small old location on the Galena Street mall to buy the “Gerry Roach Guide to the 14ers.” I was intent on doing more. Maybe even all of them. And that’s how my love and endless pursuit of 14ers began for me.

What started with a one-off invitation to join a group of friends on a local peak evolved into an incredibly rewarding chapter of adventure in the mountains. After more than 400 14er summits, 35 or so on Pyramid, I still enjoy it as much as I did back on that first day.

I often see Scott around town. After we exchange hellos and share brief updates on our latest adventures, I occasionally remind him of the credit he deserves for introducing me to something that has become a big part of my life. It wasn’t the only factor that set me on my path, but that day he led me up the mountain definitely played a part.

Now, 25 years later, I regularly find myself in Scott’s role, leading people to places like Pyramid Peak who might not otherwise be able to do it themselves. I take interested friends and clients as an Aspen Expeditions guide. You could say I’m paying it forward. But I’ve also found that I really enjoy showing people the way, especially those like Matt, who exhibit the same curiosity I had back when I got started.

As Matt and I descended through the endless talus slopes of the amphitheater under the afternoon sun, I found myself pondering the 25 years that have passed since I first hiked here. It’s still exciting to be on the mountain. And it’s always special to reach the summit.

And unlike other aspects of the valley, the mountain itself hasn’t changed very much either. The Colorado Fourteeners Initiative has made substantial improvements to the approach trail, and parts of the upper route are cleaner of the loose rock. There is much less lingering snow in the late summer, but overall, the experience is the same.

I shared my tale of my first Pyramid climb with Matt as we neared the valley floor, and I told him he should be proud to have taken the initiative to achieve this goal. Too often in life we opt out of the challenges, we come up with excuses, we say no.

Saying yes is so much more fulfilling.

I’m happy I did that back when Scott offered. Matt was happy to have said yes too. And he’ll probably never look at Pyramid Peak the same. Perhaps it will lead to something more, much like it did for me. But even if it doesn’t, it will likely turn out to be an experience he’ll never forget.

This story originally ran in the Aspen Times Weekly on August 12, 2022 – read it here. 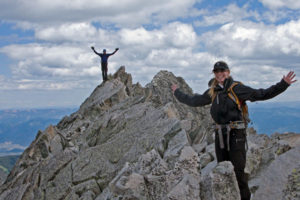 Originally planned as a birthday outing that was tabled when[...] 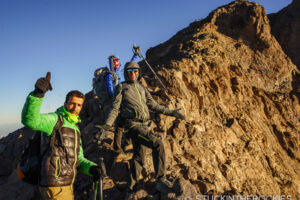 Hamid, Chris, and Christy, on the ridge below Toubkal's summit.

After three days of skiing in the High Atlas, it was time to climb Morocco's tallest peak, Toubkal. 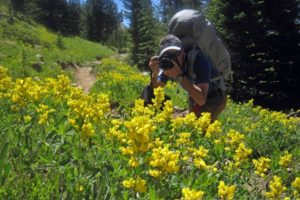