It was good snow and good times right from the start, pictured here, in the heart of the Bugaboos.

Scrawled on the wall of British Columbia’s Glacier Circle Hut, we could read the names Bill Briggs, Barry Corbet, Sterling Neale, and Bob French, along with this: “10 June 1958—Ski Traverse from Bugaboo Creek to Glacier. Started June 2. -Alpine Ski Club of America”. It was their ninth and final night on the route and the following morning they would make their way to Rogers Pass to complete a visionary ski traverse; an incredible accomplishment for the era, and decades ahead of its time.

Ten days earlier we flew in to the Bugaboos. And after we’d cached five wooden crates of food, fuel and necessities along the route via helicopter, our crew—four Coloradans and four Canadians, including organizer and local ski guide Greg Franson, of Bluebird Guides—embarked on the traverse. From the drop off in the Bugaboos we would follow close to the original 1958 route: North for six days along the spine of the Purcells, then down and across the Beaver River Valley, then back up into the alpine and north through the Selkirks and ultimately to Rogers Pass, where a couple of shuttled cars awaited.

The high route through the Columbia Mountains—covering some 85 miles while climbing over 30,000 vertical feet—is as burly today as it ever was and offers no guarantee of finishing. While gear and equipment is lighter and stronger, and pre-arranged caches keep the weight of the packs manageable, the benefits of time and technology pretty much end there. Out there, you’re still at the whim of the weather, route conditions and your own determination. Lucky for us, we had just the right mix.

Starting at the Bugaboos had us climbing southerly lines and descending cold, north snow, a recipe for incredible skiing at times. And the extra daylight and 10 p.m. sunsets allowed us to log big days with somewhat casual starts. Of our nine nights out, two were spent in huts (International Basin and Glacier Circle), six in tents and ‘mids, and one in the fiberglass Malloy Igloo, which resembles something out of a Star Wars scene.

We encountered the full spectrum of conditions. Big cornices often loomed at the start of ski descents and had to be avoided, and route-finding across crevassed glaciers was a regular issue. A huge snowpack from a winter that refused to let go required constant attention with regard to avalanches, not to mention a big effort in the trail breaking. Ropes were needed to explore descent routes through bergschrunds, for “dope on a rope” snowpits, and even once for belaying skiers down a super-steep slope with a big hazard below. The fickle BC weather and “claggy” conditions did its best to try to derail us, at one point forcing us to descend to the valley floor to move north along the river in better visibility, rather than try to recklessly navigate a broken ice field in whiteout conditions.

None of it was unexpected though, which may be why we actually pulled it off.

And as we skinned across the Illecillewaet Glacier on that final day, and we heard the roar of trucks barreling down Rogers Pass, the huge satisfaction of realizing a goal set in. I couldn’t help but wonder if it was similar to the experience of that original group, because after all, the route doesn’t really care what the calendar reads, be it 1958 or 2011. The Bugs to Rogers Traverse was complete. Time for a beer.

To see the original powdermag.com piece and photogallery, click here. Because it was such a photogenic trip, I added another set of pics below, to help further tell the story. 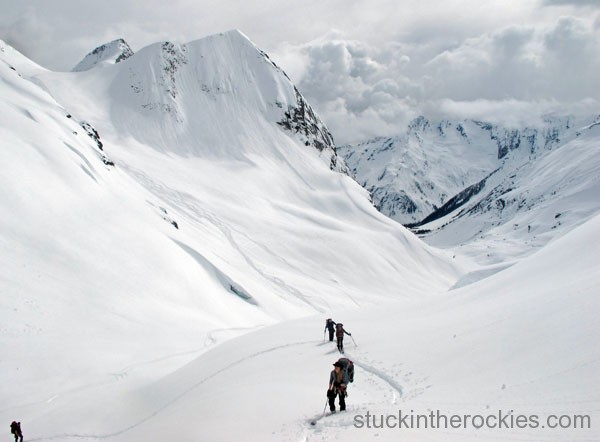 Climbing up after another wintry ski descent on the first day. 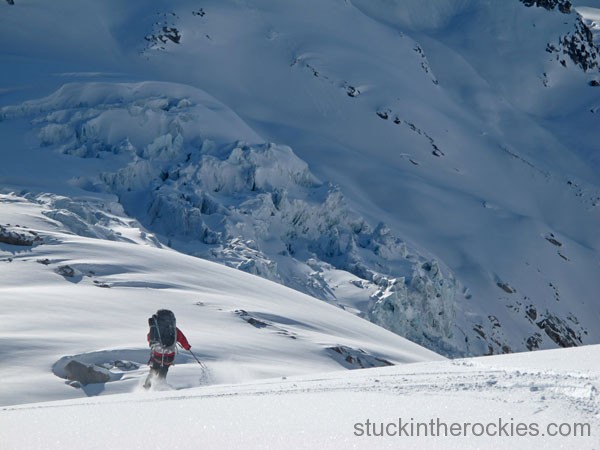 Christy, on the final descent to the Malloy Igloo, where we spent our first night. 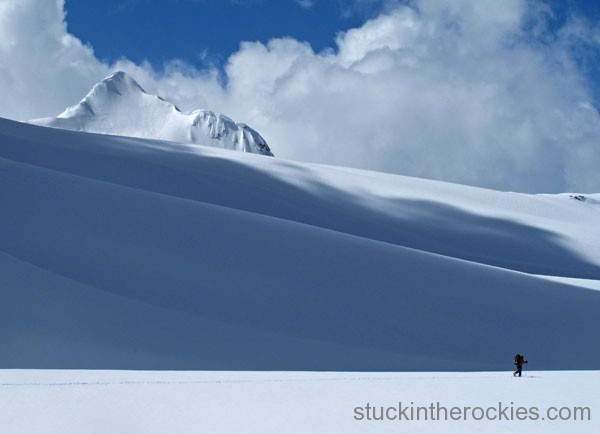 Art Burrows on the Conrad Icefield. 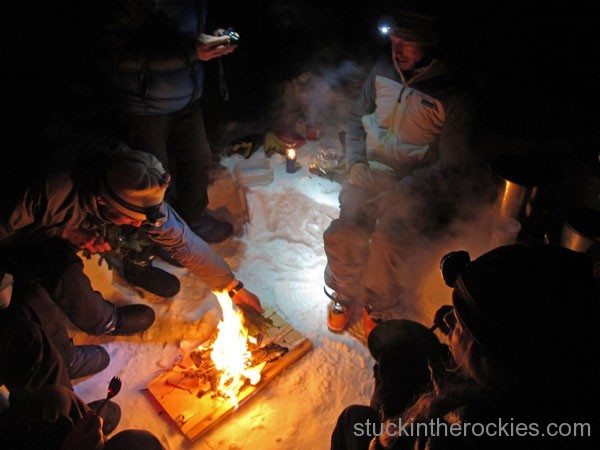 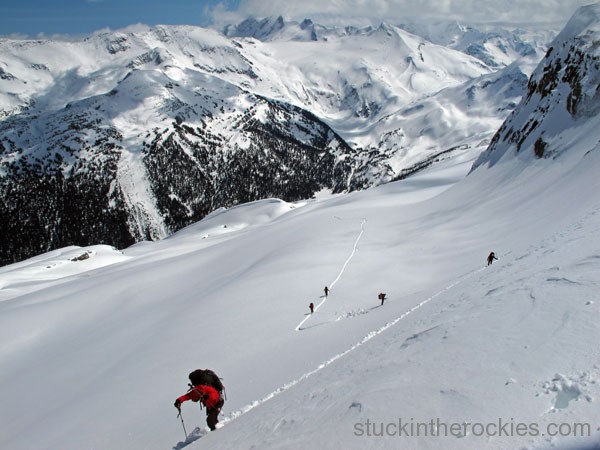 Climbing to the Climax Col on day 3, our route the day before traversed along the peaks in the background and descended from there to the valley, and to camp. 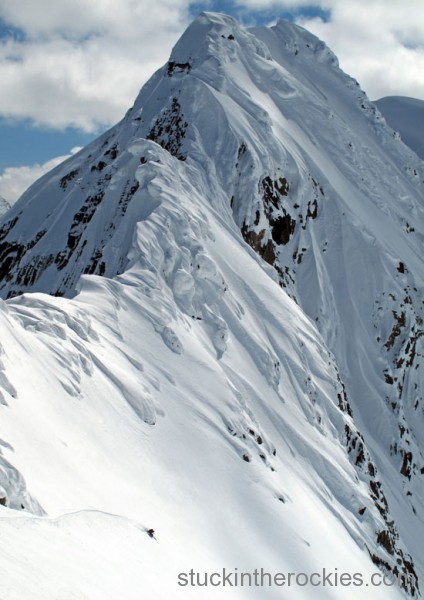 Greg Franson drops in from Climax Col, with Crystalline Mountain behind. 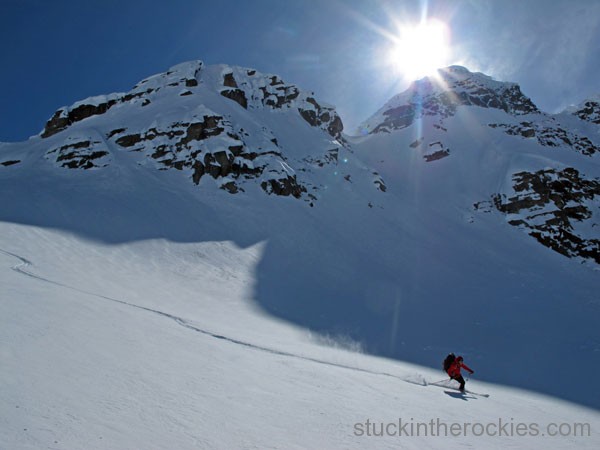 After the Climax Col, a short climb put us atop Hume Pass, where we had another ski descent with awesome snow. 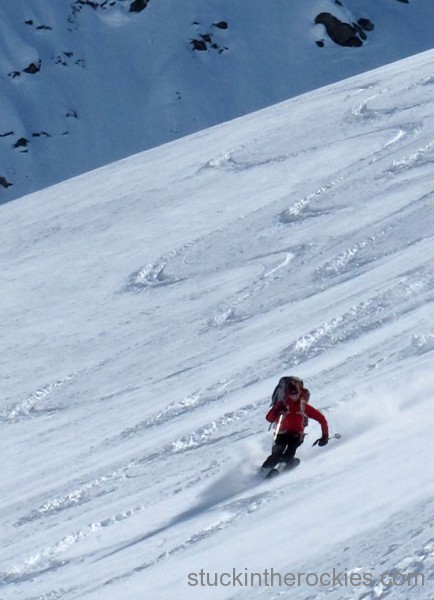 And one more from our descent off Hume Pass. 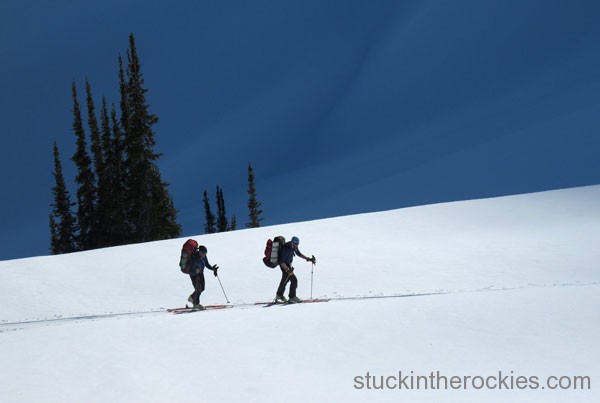 Olivier and Dirk make the late-day climb up to Snowman Lake Camp, for night three. 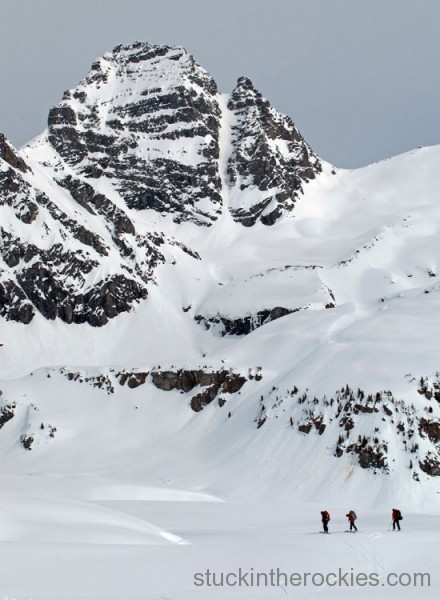 The col to the right of Syncline Peak, pictured here, was the second of three climbs we made on this, the fourth day. 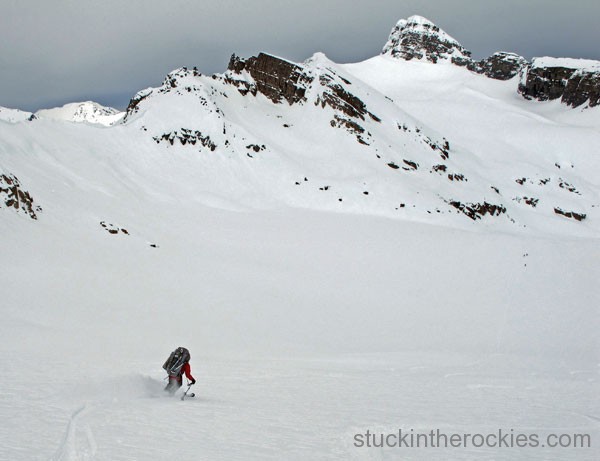 Christy, skiing off the north side of the Syncline Col. From here we headed to Syphax, in the background, where some route finding around the peaks left side put us on some steep, wintry snow down to Malachite Creek. A food cache and the site for our 4th camp awaited. 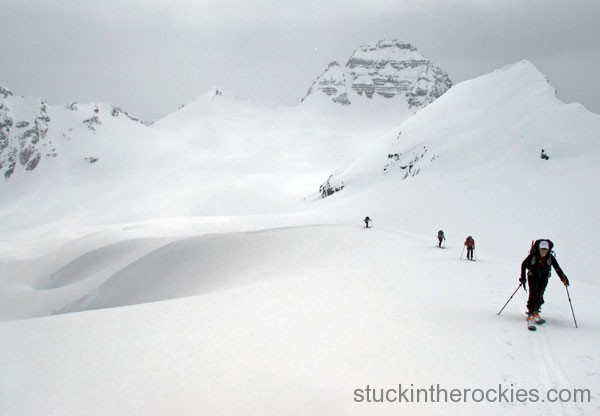 Ascending towards Syphax, Syncline stands behind 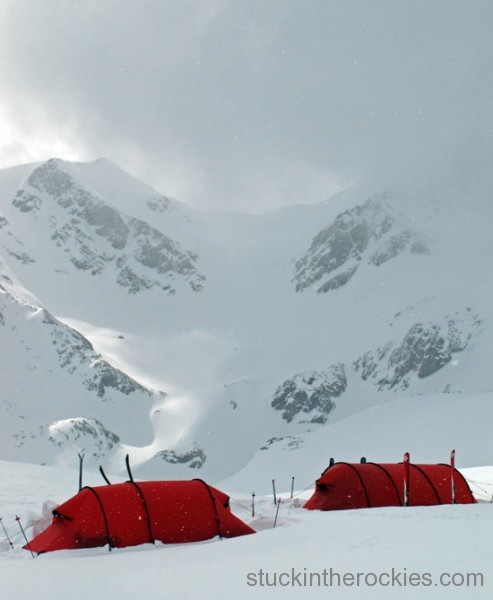 Malachite Camp, and a ski line off Syphax that part of our group skied the day before. 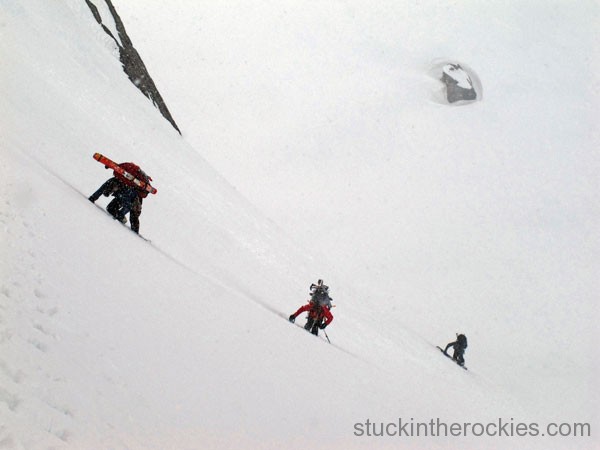 From Malachite Creek we ascended towards Malachite and Horseman Spires, at times booting on steep snow. After the climb we traversed an icefield for a few miles, followed by a ski descent and short climb up to the International Basin Hut, where we spent our fifth night. 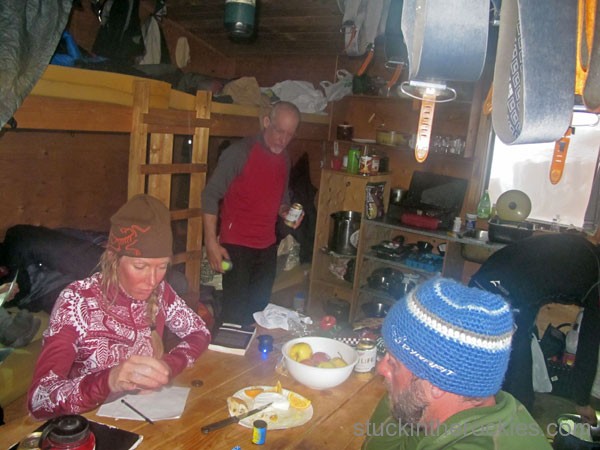 Warming up and drying out at the I.B. Hut was a welcome change to the prior three nights in tents. 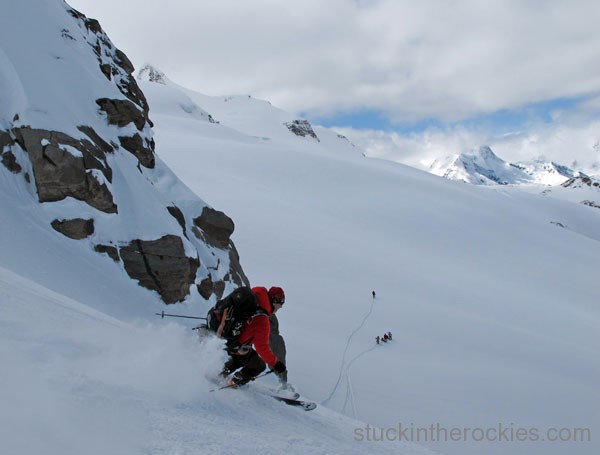 After the night in I.B. Hut, we climbed up towards Mt. David and skied our last descent down through Silent Pass and out of the Purcell Range. 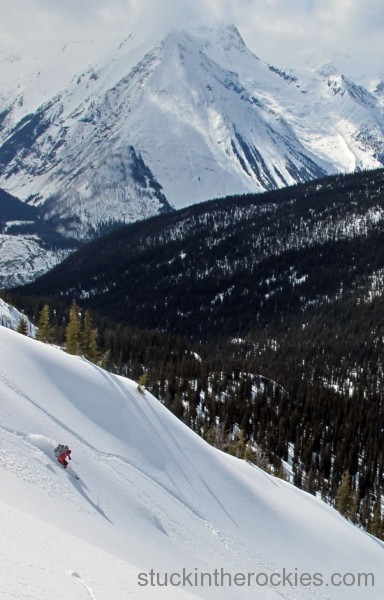 Christy heads down from Silent Pass and towards the Beaver River in the valley below. The Selkirks rise up on the other side of the river, which was the direction we were headed. 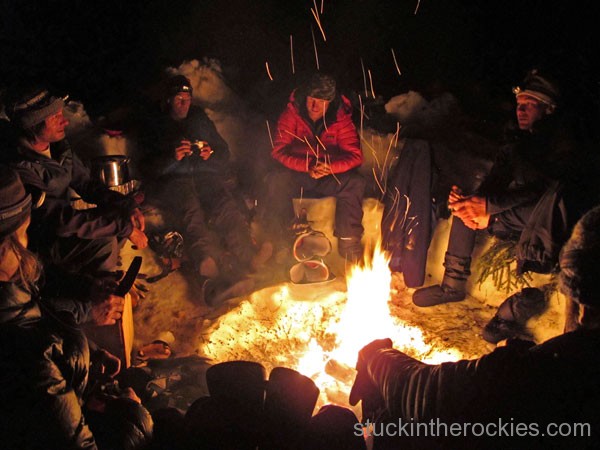 It was a relatively long day from I.B. Hut to our next camp in Butters Creek, about 12 miles. Our last cache was buried here and we would have to load up with enough food and fuel for the next four days, the longest leg yet, to get to Rogers Pass. 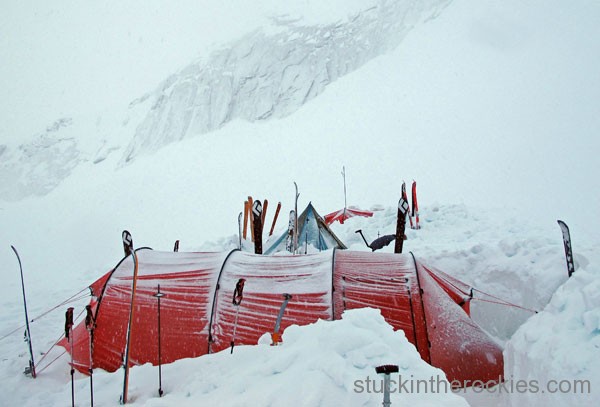 After a steep climb from the Butters Creek valley back up high, bad weather forced an early camp below the Beaver Col. The next day was cut short by bad weather too, and ultimately put us a whole day behind schedule. 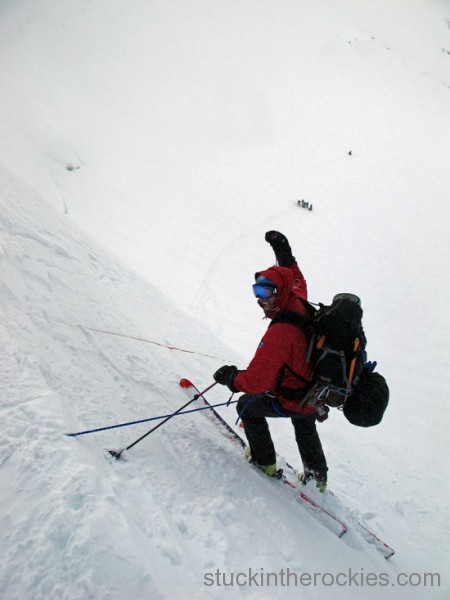 Here’s Dirk on that next day near Sugarloaf Mountain, skiing down a 50 degree slope on belay. A big bergshrund looming below (out of sight) warranted the use of a rope, where a fall could have had serious consequences. 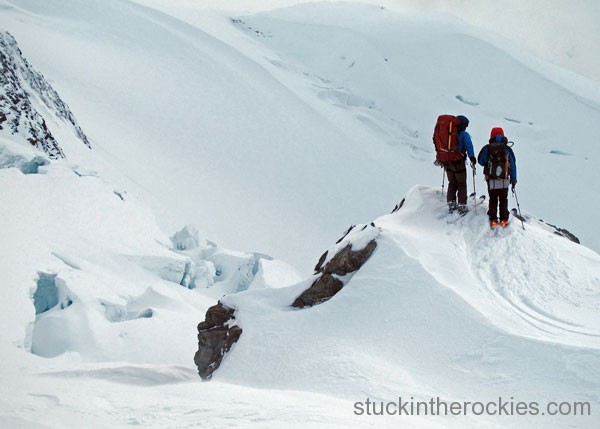 Jesse and Art try to survey for a route through the crevasses off Sugarloaf Mountain, and down to the Grand Glacier where we spent our eighth night.

After waking to claggy weather on the ninth day, our high route across the broken Deville Icefield wouldn’t be safe. But with a small amount of fuel and food, we couldn’t wait another day for better visibility and had to take a longer “Plan B” route to get to the Glacier Circle Hut. We descended off the Grand Glacier and headed north along the Beaver River for seven miles only to then climb back up and out of the valley, arriving to the hut after dark. This photo, from dusk, shows the giant cirque that makes up the Glacier Circle. The hut is in the thick trees towards the back. 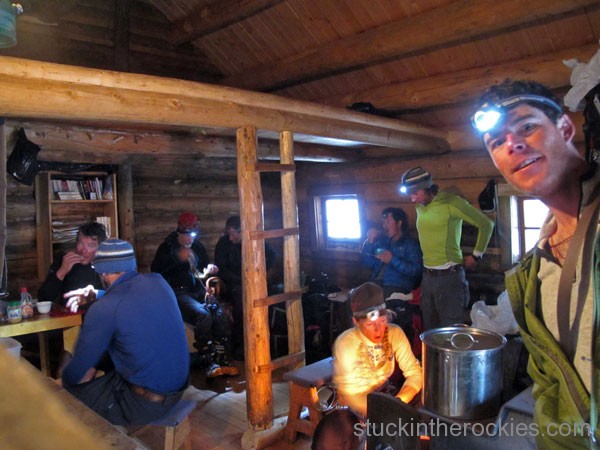 After a night in the historic Glacier Circle Hut, the group readies for our tenth and final day. As usual, Christy huddles by the fire. 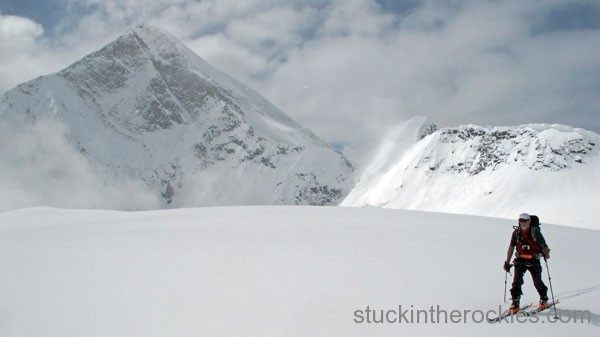 The last day on the last pass, Art Burrows cruises in front of Mount Fox, before heading down to Rogers Pass. It was an incredible trip.