November 1, 2016 Posted by Ted In the Desert, Photography, Running 4 Comments 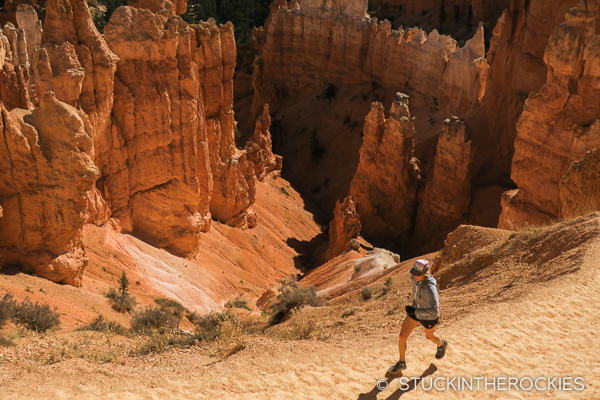 Running up one of the forks of the Navajo Loop.

We love Bryce Canyon National Park. We just returned from four days of trail running and backpacking there and we were blown away by the beauty.

Utah has no shortage of incredible desert scenery, the state has five National Parks to showcase it all. But through the years we had always set our sights on the other members of Utah’s “Big 5” (Arches, Canyonlands, Capitol Reef, and Zion are the others). It took us entirely too long to finally get to Bryce to check it out up close. 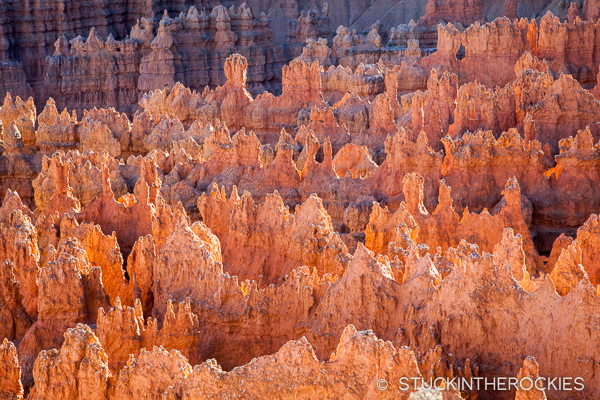 Some of the famous Hoodoos.

Bryce Canyon National Park isn’t as big as Zion or Canyonlands, but what it lacks in square miles it makes up in colorful and dramatic desert scenery that is concentrated in a couple of large amphitheaters. Well-built trails meander up, down, and around some unbelievable desert formations. Reasonable grades and excellent trail surfaces make everything legitimately runnable. There are no log steps like you see on the Grand Canyon Rim to Rim, nor will you find the hard and steep concrete surface of the Grotto area routes in Zion. It’s all smooth, gradual trails through National Park caliber desert. 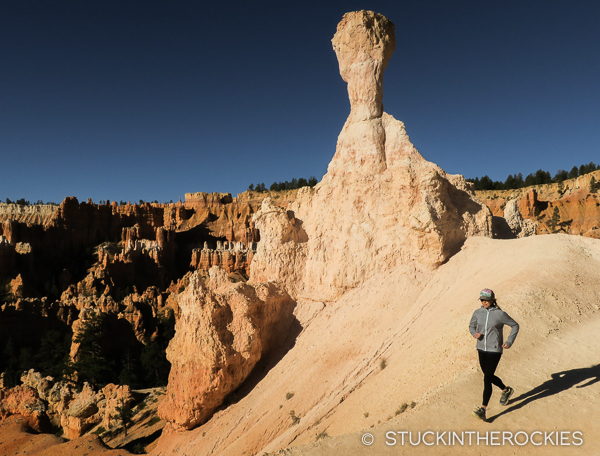 If you want to move fast, don’t bring a camera. It’s impossible not to stop at each turn and shoot the spectacular scenery.

Most of the loops aren’t too long. With the exception of the Under the Rim trail, a 22.9 mile point-to-point route, everything in the park is about eight miles in length or less. It may come as a surprise to some, but we actually like moderate length outings every so often.

The first run we did was the Fairyland Loop. This 8.1 mile loop is at the north end of the park and incorporates part of the Rim Trail. It was more quiet in terms of hikers and tourists than the nearby Navajo and Queens Garden loops, though the scenery was just as stunning. Some photos: 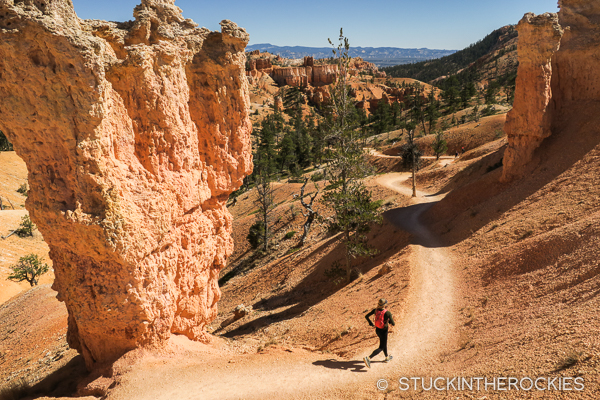 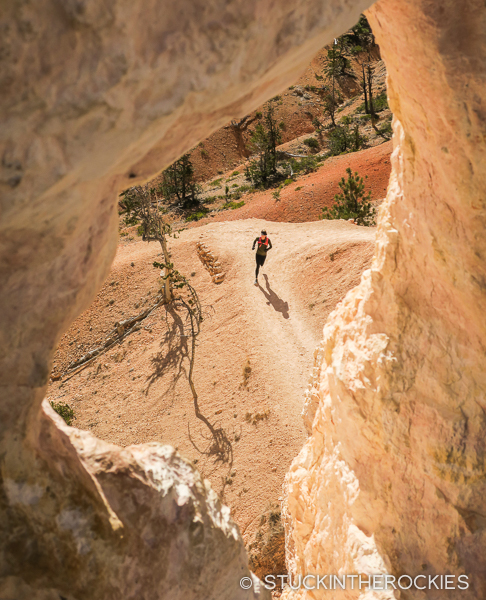 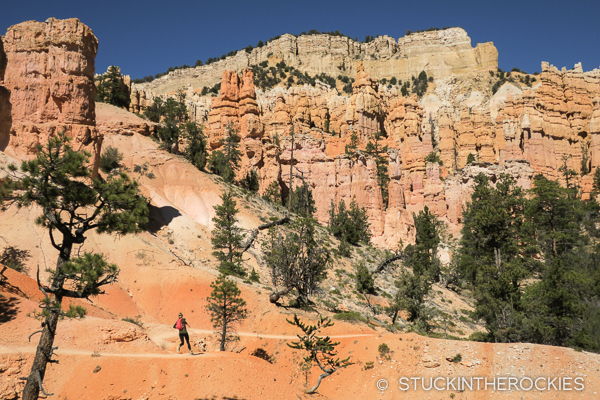 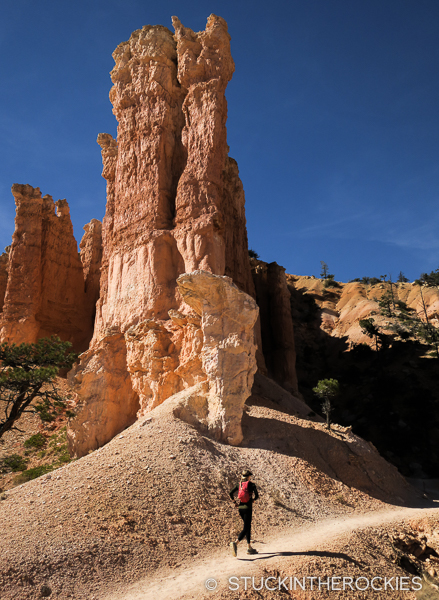 After the Fairyland Loop we headed to our basecamp at the Sunset Campground and made plans for the following morning. The goal was a combination of the more popular tourist loops— Queens Garden/Navajo Trail and the Peek-a-Boo Loop. Put together it’s called the Bryce Canyon Figure 8 and it’s about 7.3 miles in length. We knew it would be busier than the Fairyland Loop, but we figured if we started on the earlier side we would probably be able to complete it before the throngs of hikers made their way there. 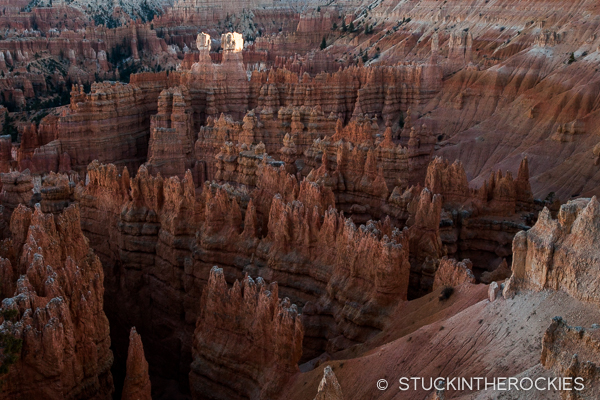 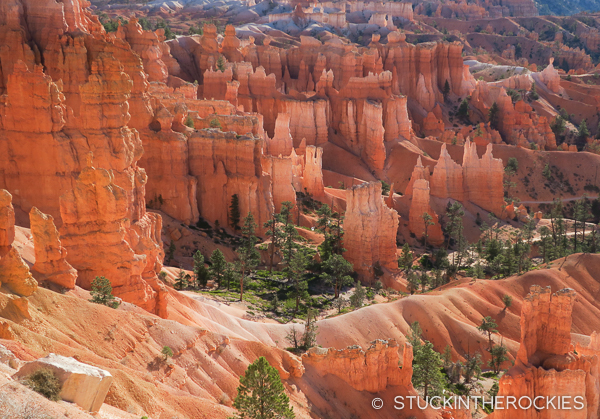 And Sunrise Point a little after sunrise the following day.

It worked out as planned. We did encounter groups of people in parts, particularly on the Navajo Loop, the most popular route in the park. But generally speaking it was still kind of quiet and really fun. There’s good reason why the masses like these trails, check out some of the photos: 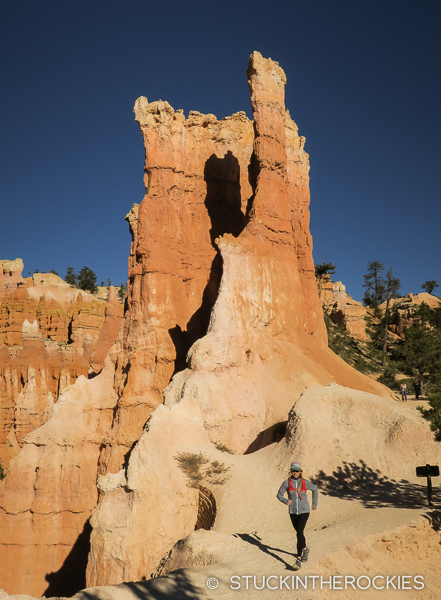 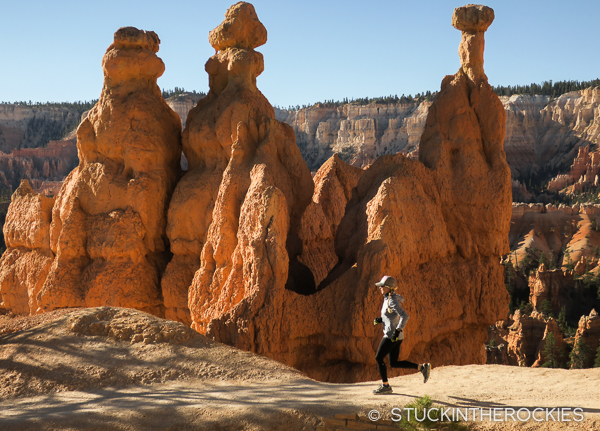 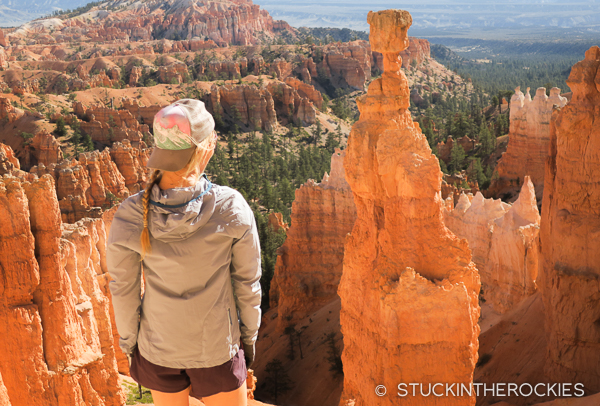 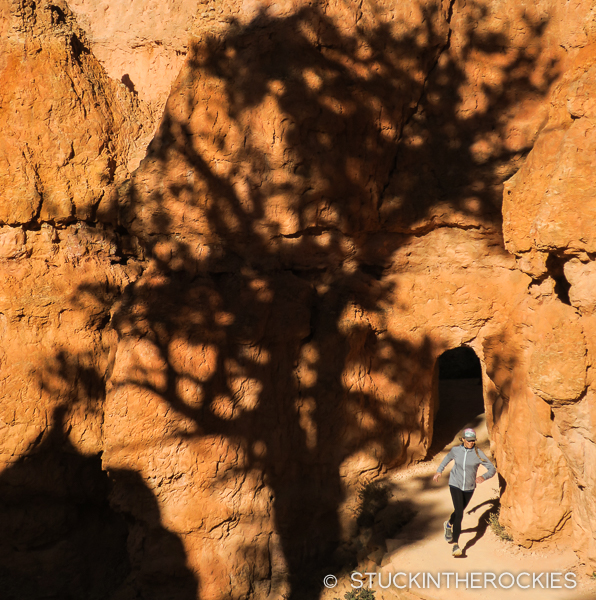 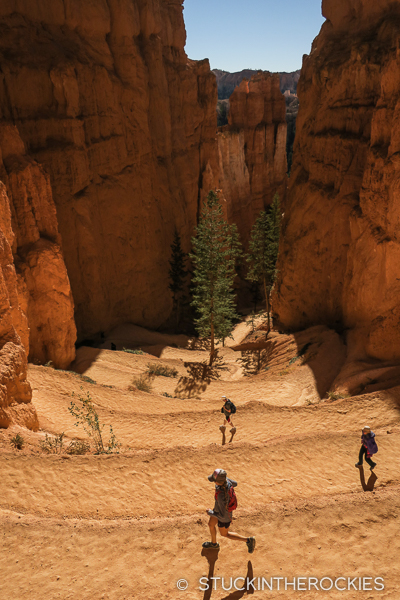 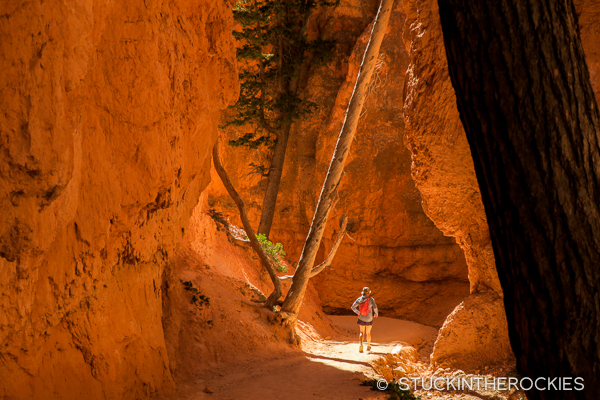 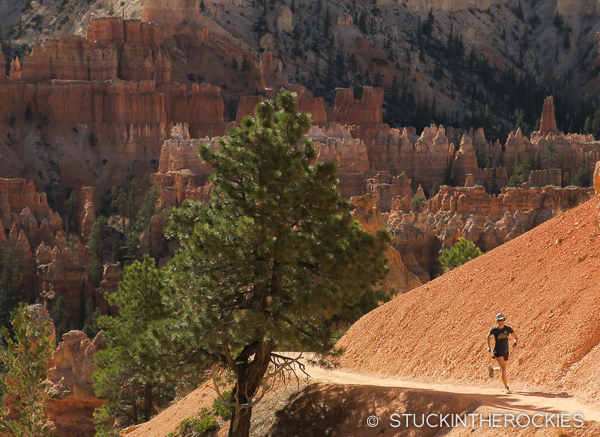 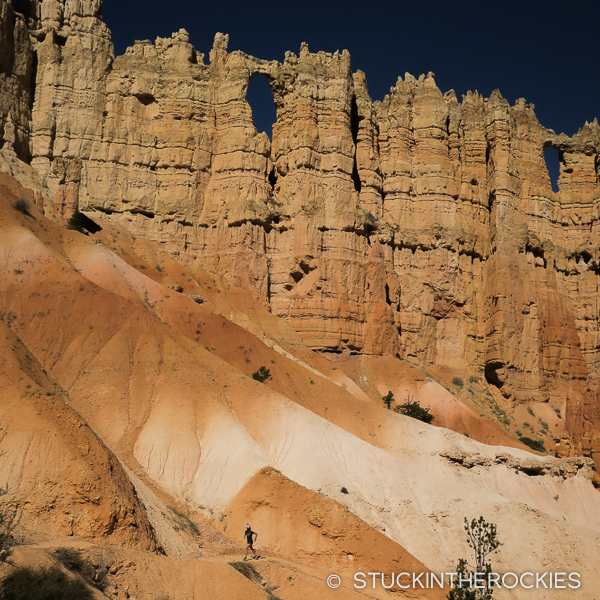 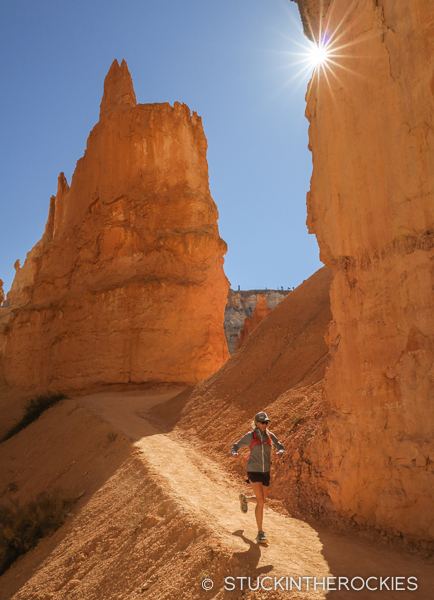 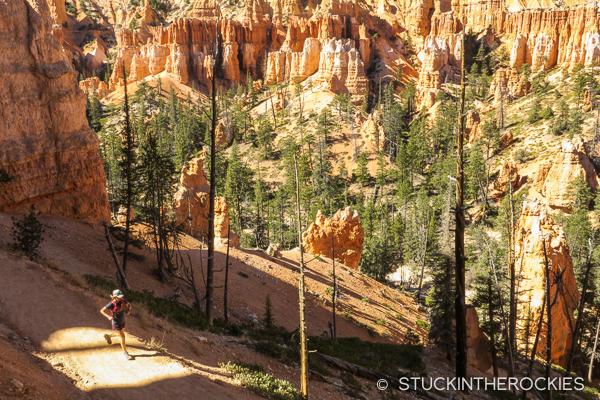 After finishing that loop we drove to the south end of the park to check out the Riggs Spring Loop, an 8.4 mile trail that starts and finishes at Rainbow Point. The scenery in this part of Bryce isn’t as dramatic as it is up the north where we started the day. The silver lining is that we hardly saw a person on the trail, which is worth something if you’re trying to get away from the people.

The next morning we went back down the Queens Garden Trail to shoot some photos and then packed up the big packs and made our way to Bryce Point to start a backpack. A five mile hike along the Under the Rim Trail would take us to our campsite in Yellow Creek. The trail took us through the interesting formations of the “Hat Shop” and eventually we arrived to our site in the valley below Paria Viewpoint. 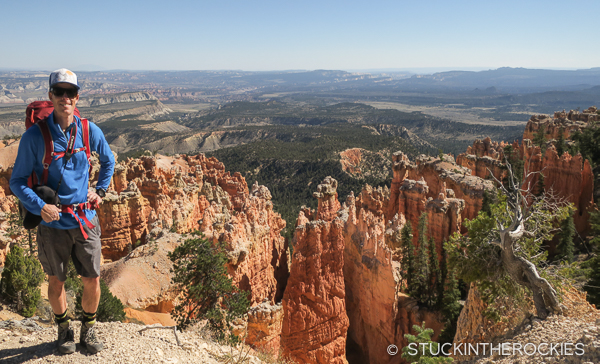 Heading to camp along the Under the Rim Trail. 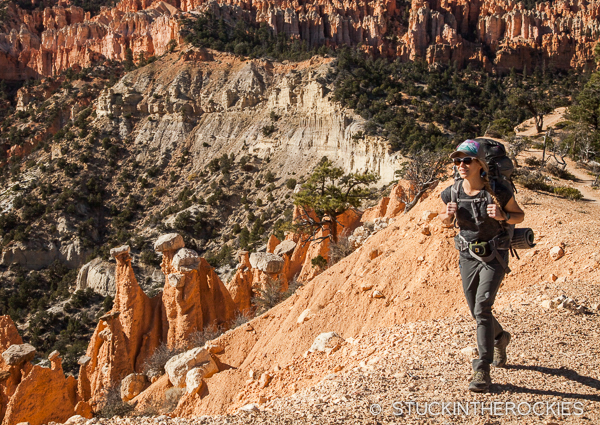 Passing through the Hat Shop, named for the distinctive rocks atop the sandy columns.

Backcountry camping in National Parks often comes with some rules. In Bryce you need to obtain a permit from the rangers which you can only get by visiting the Visitors Center, and that has to be done during operating hours. Additionally, there’s a rule against campfires and we had to store our food in our Bear Keg canister which is always unwieldy in a backpack. But a backpacking night was something we wanted to do and the solitude of being out in another quiet section of the park was worthwhile. 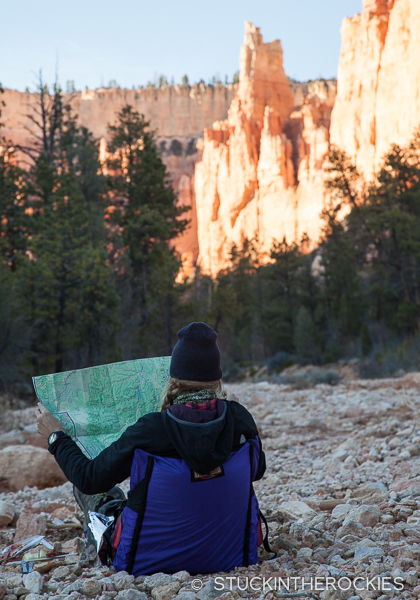 Near camp in Yellow Creek. 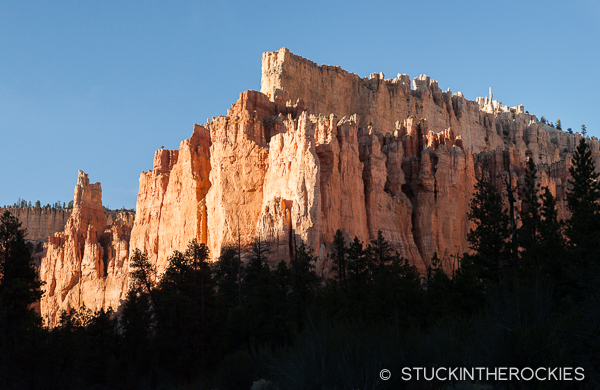 The view back up to Paria Viewpoint. 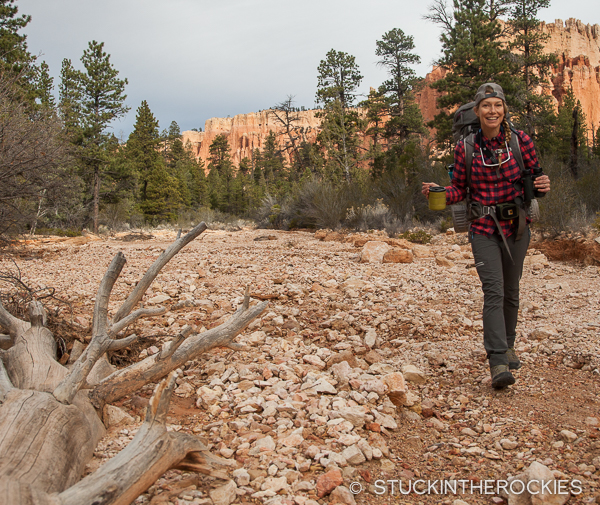 Packing out the next morning, coffee in hand. See you next time Bryce!

Bryce Canyon National Park has a lot to offer. If you’re into hiking, trail running and are looking for more moderate outings compared to some of the ultra length endeavors that have become popular like the Zion Traverse or Rim to Rim to Rim, it’s well worth the trip. We’ll definitely go back again. 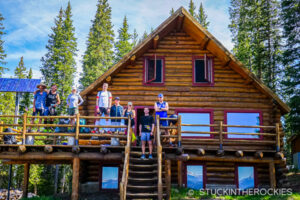 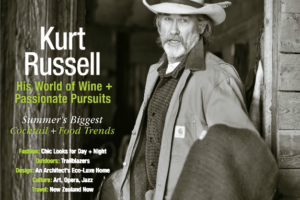 The usual trail races are coming up (Lake City, Hardrock)[...]