The Writing’s on the Snow 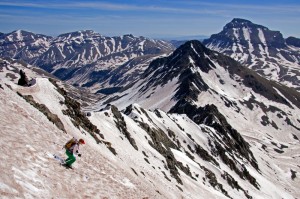 Christy gets down with the brown on Wetterhorn’s East Face

Five weeks ago I laid out two possible scenarios concerning the brown snow this spring, the dust would either be a non-issue or it would cut the season short. Opinions around town favored the latter as the likely outcome, and that’s understandable because it looked pretty bad around here. For many, one look up at the dirty snow dried up much of the enthusiasm to ski.

For us, in hindsight, it was a simple case of denial. We insisted the spring would turn out OK. Refusing to concede to the dust which hit the Aspen area particularly hard, we abandoned our local ski goals and went elsewhere, in search of snow was the least dirty. We eventually found it, down in the Sangre de Cristo Range. After logging a lot of time in the truck we managed to scrape a spring season together. At least until now.

After several successful trips to the Sangres and against our better judgement we decided to foray into the San Juans, never mind that they were reportedly hit the hardest by the dust. Denial can be pretty powerful, we figured it would be fine because it was mid May which is traditionally a great time to be there and they do usually get a lot of snow. First we went to San Luis Peak, 14,014 feet and it was dreadful.

Unaware to me at the time, and perfect for the purposes of this post, was the coincidence that I was here on near the same day four years earlier. So I pulled up some old pics from the earlier trip for comparison’s sake and that’s when it really sank in. Here’s the side-by-side for San Luis Peak.

A winter image and a summer image? No. These were taken on nearly the same day, four years apart. 2005 on the left and 2009 on the right. (click to enlarge)

On the left, the view of the peak from San Luis Pass on May 19, 2005. Sean Shean and I skied the obvious couloir that runs down the center of the face. And on the right, the same view last Saturday morning, May 17, 2009, four years later and two days earlier on the calendar. Where’s the snow? Is it all gone due to the dust? Hard to say because there’s no snow remaining to see how heavy it hit. Dust skeptics could wonder if it was just a lean snow year locally. But if you track that sort of thing then go check your journal and you’ll see that ’05 was just an average year.

We weren’t ready to hand down a verdict on the dust just yet. We headed back to Creede for breakfast and then delved deeper into the San Juans, to the snowy hamlet of Lake City, and set our sights on Wetterhorn Peak, 14,015 feet. Like San Luis, I skied here four years earlier, and this time on the very same calendar day. And here’s that comparision.

The proof is in the pudding, vanilla versus chocolate. Pics taken on same day, four years apart. (click to enlarge)

As for skiing, well needless to say, we didn’t on San Luis. Despite being a long way to travel to get turned back, Christy felt she didn’t want to go searching for some desperate patches of snow that might reside somewhere out of sight and would instead come back later. Call it a decision that quality of the experience is more important the quantity of peaks skied. It was good to hear too– I didn’t want to go up there at all. Having done this whole thing once already, as I return to ski many of these peaks with her for my second time, I’d prefer to get them at least in as good condition as I got in the past, if not better, and this was neither.

We did ski Wetterhorn though. Most everything about the day was great, except for the snow quality, which was lousy. With the dust so thick, the added heat it draws caused some nasty sun cupping, usually a trademark of late spring or mid summer snow, which made it pretty challenging. And so you know, “pretty challenging” conditions reported by two people in heavy denial and trying to stay optomistic translates to “downright terrible.”

So as predicted by many, the dust layer cut the season short. I would always prefer to prove the pessimists wrong but on this one they were absolutely right. The added heat it collects accelerated the melting of the snow so much that the peak runoff, which usually falls somewhere in the second week of June, is set to crest today if it hasn’t happened already. That’s nearly a month ahead of average according to this report, which is bad for lots of people and not just skiers. 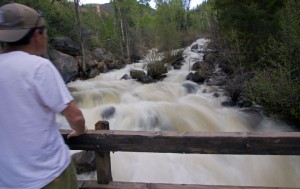 Denial ain’t just a river in Egypt, and this one happens to be flowing at its peak.

Much like a big snow year that might occur once in a decade, hopefully this too is an isolated 10, 30 or even 50 year event, and not a sign of things to come.

Seeking some denial therapy I headed up to see our local Hunter Creek and the reported high water. Here’s a shot from two days ago. At low flows (and higher up in the valley), it’s easily crossed on a mountain bike. While I might wait a little while to try that I do think it’s time to switch gears to the summer sports.

And on a separate note, Independence Pass opens today at 2 PM. Anyone feel like skiing? 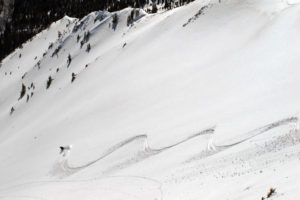 Still buried up high, the dust is exposed dow

Sean leaves his mark, with a slight brown tinge. Down[...] 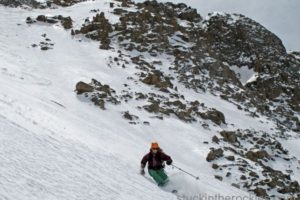 And then back on the fun part. Next up Mount Wilson.

From the notch in the distance, it’s easier terrain to[...]