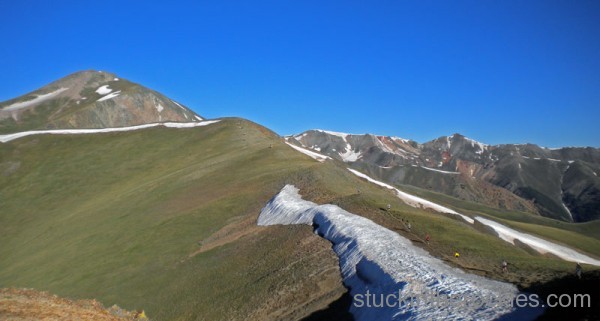 Runners somewhere around mile 8, on the ridge between Alpine Gulch and Williams. At the end of this ridge are the 14ers Redcloud and Sunshine.

Astronomically speaking, Monday the 21st was the longest day of the year, but for about 200 runners, Saturday’s annual San Juan Solstice 50 Miler in Lake City marked the real beginning of summer. Blue skies, dry trails and resulting dry feet contributed to a record number of finishers (results here) and a near course record by 18-year old winner Dakota Jones, who covered the mountainous course with nearly 13,000 feet of vertical gain in 8:13. It was definitely welcome weather when compared to the snowstorm last year and the peak flow creek crossings of ’07 (see report here).

For me, this years SJS50 was, once again, less a race and more a training run/Hardrock dress rehearsal, which is now barely three weeks away. This race is worthy of a title much greater than “training run” implies, and everyone into long distance trail running should have it on their list, I just didn’t have much of a choice. Because I find it hard to stay enthused about running in a ski town in winter– and I know I’m not alone–  it’s always a rush to get ready for the early summer races. Turned off by winter’s short days, freezing cold temps, snowy and icy roads and distracted further by a multitude of other winter sports that are all more fun than running in the cold, I can rarely muster the motivation to go. When I do, it rarely produces more than a short, purposeless jaunt through the neighborhood that really doesn’t amount to much. Further undermining the cause is the fact that when the weather finally does improve, rather than make mileage a priority we continue skiing, typically as far into May as possible. This year was no exception– we skied until May 16th after which I did my first long-ish run of about 15 flat miles, just one month before this 50 miler. Then I sat on the beach in Mexico for nearly a week and the accelerated training schedule resumed around Memorial Day. Two 25 mile runs later and it was time to go to SJS50. Now I have three weeks to recover and do whatever last minute prep I can to pull off 100 miles at Hardrock in early July. It’s not ideal, in fact if anything it’s seriously deficient, but that’s how it is.

A panorama of the course from around mile 29. The “Lake” of Lake City can be seen below, the course climbs up to the ridge in the distance and runs to the left, descends and climbs again, running from the left of this vantage to the snow on the right in the photo and eventually to the mountain off the in the distance to the right of center and then down towards the lake again. And that gets you fifty miles. Remember, treeline is near 12,000 feet. Click the panorama to enlarge.

So my 50 mile training day began at 5am Saturday and, all things considered, it went really well. Setting the bar at the relatively easy-to-achieve and non specific “finish and don’t beat myself up” mark meant success was likely. If you haven’t done a race specifically as training for something else down the road, you should, because for one thing, it’s a lot more fun when you remove any self-imposed race pressure. You get a nice shirt just for doing it too. 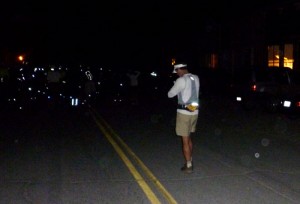 Don’t want to get wrapped up in the “race” part of the race? Then start dead last. Christy shot this pic of me at the start playing with my watch as the gun went off and all the reflective bits of the field took off.

As for the day, the first leg up Alpine Gulch in the beautiful clear morning was awesome and has always been my favorite part of the course. I got to catch up with former Global Extremes partner Colleen Inkhen through the second leg to the “Carson” aid station– she later finished as 4th female overall, nice work Colleen. I cruised the middle “Divide” section under the cloudless sky to mile 40, after which I changed into the Hoka’s and picked up Christy who paced me to the finish. Everything felt good right up to the end– no stomach, feet, joint or muscle issues that weren’t at least manageable– and I crossed the line in 11:33 for 37th place which was actually a PR. Better yet, two days later I’m feeling really good, which was of course was the goal, to use the SJS50 to prep to for the big show on July 9th. Only then will I know then if my pathetic seven week training program actually works.

And since I’ve been asked by a few people what and how often I eat when doing something like this, I thought I’d share the day’s menu. There are all sorts of different food strategies, from vegan snacks to cold pizza and for me, I find that simple is better and I try to stay away from filling solid food as much as possible. Here’s what got me through the 12 hour day with aid station names in parentheses: 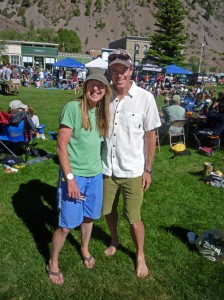 Colleen won herself a nice, wood carved, age group award and I won new Montrails in the raffle. Who’s the real winner here?

That’s what worked for me and has for some time now, and is largely the same, except in greater quantities, for a 100 miler. And it doesn’t cover what I eat after the race, where anything goes. 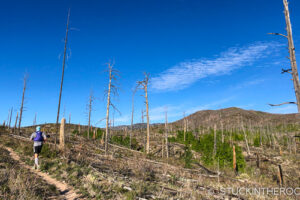 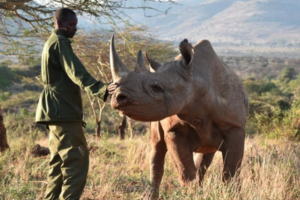 The Wild Women Ultra in Kenya

I am excited to share information about an upcoming ultra that I will be running and an organization that I am fundraising for.