So it was a record breaking ski season and snow year in most of Colorado. That’s good, right?

Well it was way back in January that Christy, Richard Betts and I made plans to run this race. The mountainous course touches 13,300 ft., has more than 12,000 feet of elevation gain and spends the majority of miles well above 10K(with a huge stretch above 12K). Last June Christy had ideal conditions and a great race here, as did I back in 2002. Richard was hoping for the same as this would be his first foray into the ‘ultra’ distance category. When the winter snowstorms of 2008 finally gave way to spring sometime in late May we knew that if the race was even to take place, the conditions would be far from ideal(we won’t discuss the rushed, one month training schedule we put together).

Officially, the decision to hold the annual 50 mile run in the mountains surrounding Lake City was made just three days before the gun went off. Deep snow on the high sections of the course along with creek crossings in dangerously high water had the race organizers uncertain. Some excerpts from the website updates:

Still lots of snow on the Divide and above the Alpine Aid Station. Scouts report thigh deep snow above Carson, but melting quickly. We are planning on making a decision on the course on Wednesday before the race, in order to give the course the most time to dry out.

followed with some optimism a week later,

Scouts on the Divide today report better than expected conditions, and so we are fairly certain we will be running the regular course.

and then the final word.

We will run the regular course. Snow levels will not be unusually high, BUT crews today describe Alpine Creek crossings as “epic”. There will be volunteers at all crossings, but racers must be prepared for high, cold, rushing water early in the race.

Alpine Creek crossings will be high, fast and brutally cold in the early morning shadows of Alpine Gulch; we are roping the first 8 and will have crossing guards at each of those. Be patient, the moments you save by trying to jump
around the runners using the rope may cost you the race or your life. You will not feel the sun’s warming light until the Alpine Aid Station.

And cold it was. After the first few crossings all the muscles in our toes and ankles were completely numb so we plodded along the trail as though we were running on stumps. Our feet would be wet all day.

Darkness at the 5AM start caused us to lose Christy somewhere. Richard and I stuck together all day.

Richard waits his turn as we were told we could only go one at a time.

There’s no way to avoid the water and after a dozen or so crossings it seemed that just as soon as sensation would return to our feet came yet another dousing and more numbness. Coincidentally, the rivers peaked today(in Aspen at least). Nice timing.

Eventually we reached the Alpine aid station around mile 6 and crossed over to the sunny side of the mountain and warmed up. 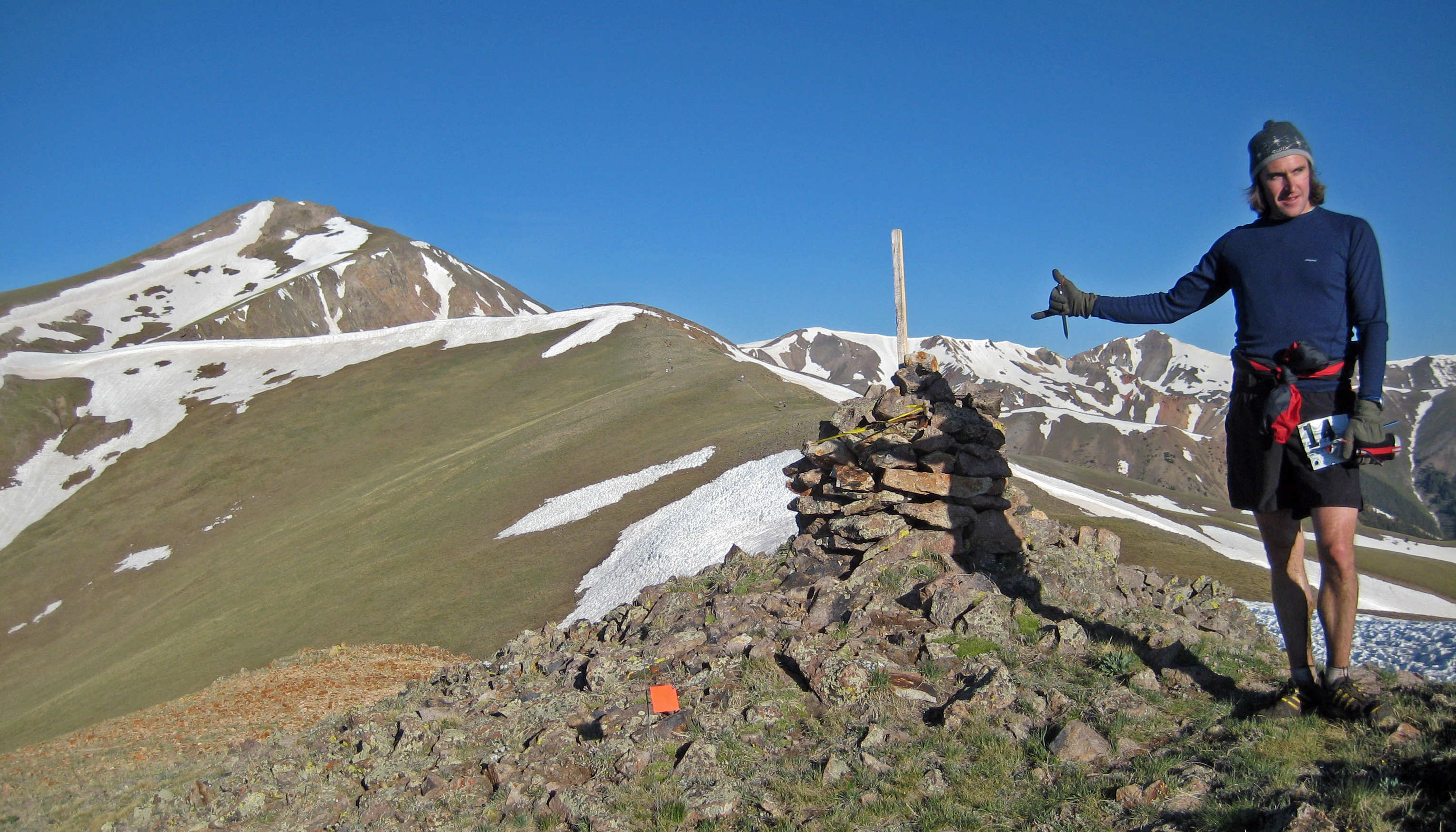 Richard, just psyched to be here. The course heads along the ridge behind.

Cruising in the 12K-13K elevation range, around 7AM. Where’s Christy?

Looking back to the east with the runners coming up behind. It was awesome to be here on a cloudless morning on the summer solstice.

With the first big 4K+ foot climb behind us, Richard cruises along with Sunshine Peak(14,001ft.) ahead of him and a waning moon overhead. Pretty cool scenery here by mile 8.

Careful crossing the snowfields! We each carried an aluminum tent stake to help self arrest an accidental sliding fall.

Has anyone seen Christy? We hoped she was having an OK time.

Richard begins the descent to the Williams aid staion(mile14-15) in the valley below. The red line indicates the course ahead.

Many hours later I stand atop ‘Coney’ benchmark, the high point(13,300 or so) and near the halfway point in the race. In the distance to the left is Rio Grande Pyramid. I then spent some time telling the story of that day. I yelled out to Christy here but heard nothing.

In three weeks the Hardrock 100 will be run near here and by the looks of the course here today I think the conditions might be good. Unfortunately I’m still sitting on the waitlist at 22nd so my chances of getting in are slim. I’ll know soon.

Following the Colorado Trail in parts, the course stays high on the Divide for a while, passes another aid station and eventually descends to near Slumgullion Pass(Hwy. 149) and the mile 40 aid station.

Changing socks at Slumgullion aid station was a good idea. It doesn’t look so bad in the picture but trust me, 9 hours of wet feet ain’t pretty.

With a homestretch feel, the next 2.5 hours passed pretty quickly. I don’t think I’ve ever heard Richard dole out so many ‘awesomes’ and ‘intense’ sentiments. We cruised to the finish line in Lake City in 12:29 and we were both psyched with the day.

I wonder how Christy is doing?

Predictably, Christy was just fine. Finishing in 14:04 she was excited to be there and finish feeling good. While it may appear so, she wasn’t actually skipping across the finish line.

Congrats to Aspen friends and SJS50 finishers Todd Kennedy, Devin Gardiner and especially Zeke Tiernan who managed a second place here Saturday and now has his sights set on the Leadville 100. Keep a close eye on him. 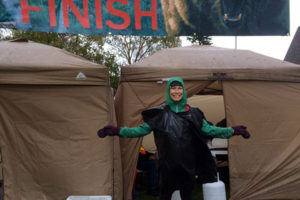 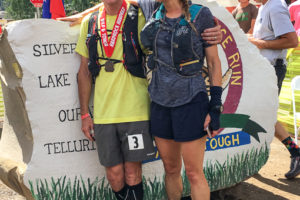 At the top of Dives-Little Giant, the first climb of[...]