The Hoka One One

Home OpinionThe Hoka One One

The Hoka One One 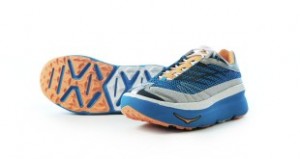 Well it’s hard to say, but after getting my hands on a pair of these and hitting the trails, this latest European concept might actually have some legs, or at least help preserve mine.

The Hoka 1.1, a super-cushioned running shoe, is the antithesis of the current minimalist trend in running, and is being introduced as the new barefoot craze seems to be hitting full stride. The compelling case for barefoot running and it’s purported benefits have made otherwise crazy ideas like the Vibram Five Fingers trendy, and in the process fault traditional cushioned shoes for causing injuries. Having not ventured down the shoeless path yet, I can’t quite speak to the topic, but after one quick jaunt up the trail and back in the Hoka’s, I was left thinking that the barefooters out there might want to reconsider their decision.

The debate will continue as to the pros and cons of barefoot vs. cushioned, but even with all the great press the minimalist camp receives these days, I find it hard to believe it will ever move beyond the fringe. Cushioned running shoes are and will remain, in my opinion, the norm. And for the majority out there who prefer cushioned shoes, you can’t get more cushy than the Hoka.

If it’s not obvious, these weren’t designed with the 1500m or 5K in mind, but rather more mountainous courses over long distances, the kind of days that lead to blown out quadriceps and sore knees. But even if you don’t find yourself in that latter category, they’d probably be great for anyone whose seeking a super light and super cushioned running shoe. The Hoka website can explain some of the ideas behind the shoe, and after trying them out myself on some trails around Aspen– rather apprehensively I should add– I gave them an honest, though preliminary, two thumbs up. They’re much lighter than my regular trail shoes, the aggressive rocker in the front rolls you right into the next stride, and the cushioning is nothing short of unbelievable. The shoe absorbs so much of the impact on the downhills you can take steep descents with greater speed while not worrying so much about trashing your knees, and on lower angled terrain it almost feels as though you are bouncing along the trail. Better yet, later in the day I felt almost none of the usual symptoms in my muscles and joints that normally remind me I was out running earlier, and as I get older and concern myself with preservation, longevity and wear-and-tear in general, that’s a good thing. To think about the soreness and swelling experienced in late stages of the more challenging mountain races, I can’t help but wonder if these kicks could be a secret weapon of sorts.

As for cons, so far I haven’t discovered much apart from superficial appearance issues. The loud colors seem to call out, “Euro!” and combined with their size and shape earned a few comments from friends comparing them to the footwear of certain circus characters, including one from Christy as I headed out the door yesterday,”Have a good run, Bobo.” Like anything new, it may take some time for acceptance. It’s reminiscent of the shaped ski revolution during late 90’s where the short, fat skis were initially viewed as being silly and thought to be just a passing trend. Now, a dozen years later, long, straight skis are the joke and everyone wants wide skis with a rockered tip. Maybe these wide shoes with rockered tips will be the norm someday too? Maybe that’s a stretch of a comparison but it’s definitely significant that Karl Meltzer, arguably the top dog in the 100 miler scene (with an astounding 29 outright 100 miler wins), is donning Hoka’s now and is shooting for another course record at Hardrock next month.

The Lake City 50 miler is this Saturday and I’ll be at the Hardrock 100 again a few weeks later, and I might have to give these flamboyant kicks a chance to shine. I’ll let you know how it goes. 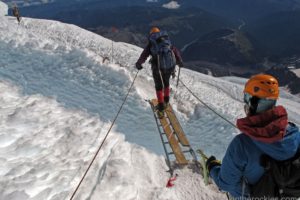 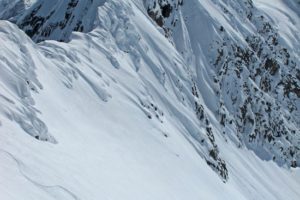 Jesse Berg drops in from the Climax Col on Day 3 in the Purcell Range.

The Bugs to Rogers Slideshow

Jesse Berg drops in from the Climax Col on Day[...]