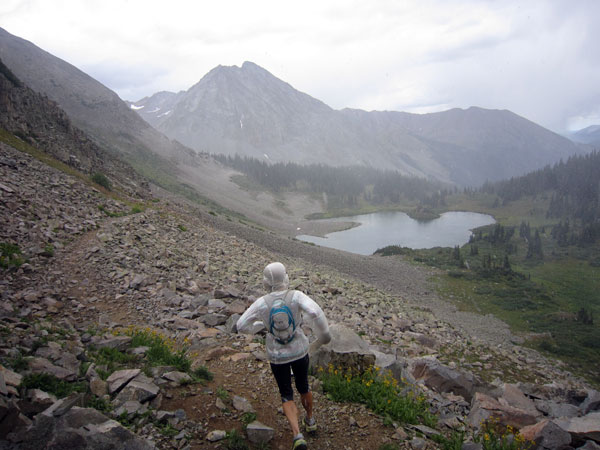 Forty-one miles, 9,600 feet of gain, with a high point of 12,900 feet over three passes and four valleys– that counts as a pretty long day in my book. Our friend Tim always tells Christy and I we’re “masters of the long day.” I guess in a relative sense experience does lend itself to smooth adventures, but just because I sum up our big days in 500 words or less doesn’t mean they all go off without a hitch. Besides, I’m not sure you can ever truly master anything out in the mountains, but in Tim’s defense, we do love to try.

So with the Bear 100 two weeks away, we were looking for one last long day on the trail. In search of something new and different, we decided to connect four classic valleys we’ve visited many times before, but never all in one push. Here’s the map of our Snowmass, West Maroon, East Maroon and Conundrum linkup:

The course as we followed it from green to red, but you could just as easily go in the reverse direction.

From the Snowmass Creek Trailhead, we ran up towards Snowmass Lake, and headed over Buckskin Pass to Maroon Lake. Following the seldom used trail from the lake, we cruised down the West Maroon Creek Valley and connected with the East Maroon Trail. From there, we went over East Maroon Pass and down to Copper Lake. Our flirt with the Crested Butte neighborhood was brief, and we headed up to Triangle Pass, which placed us high in the Conundrum Creek Valley, and from there it was about 11 miles down to the trailhead. Pre-shuttled bikes and extra clothes awaited us, and we rode home in the dark, via Castle Creek Road.

The elevation chart shows the first climb topping out on Buckskin Pass, and then descending to the confluence of West and East Maroon Creeks around mile 18. On the second climb, East Maroon Pass is the lesser of the two high points, around mile 27, and Triangle Pass was a few miles and a thousand feet higher from there. 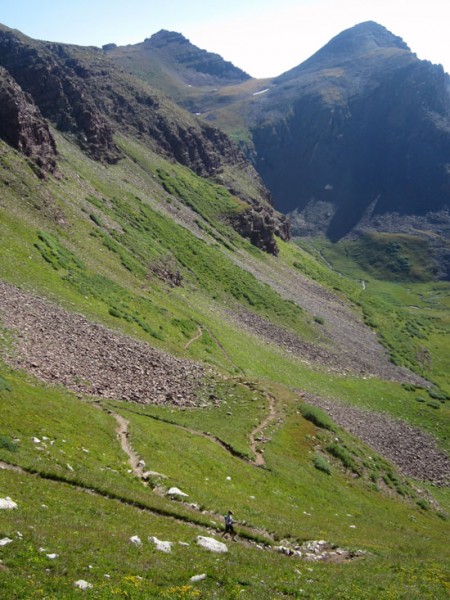 Another gorgeous morning on Buckskin Pass, around mile 11. 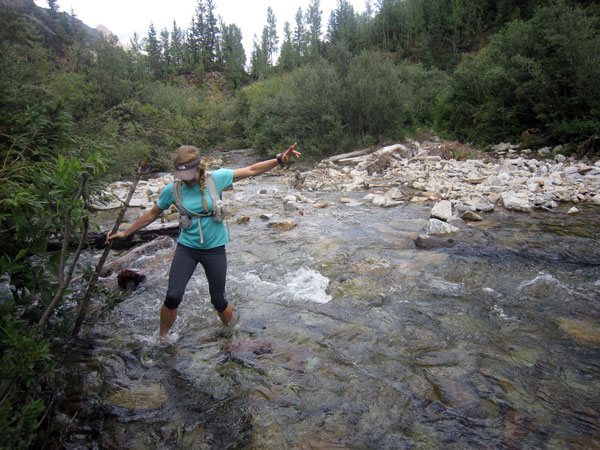 The water is still high in East Maroon Creek, here at about mile 22. 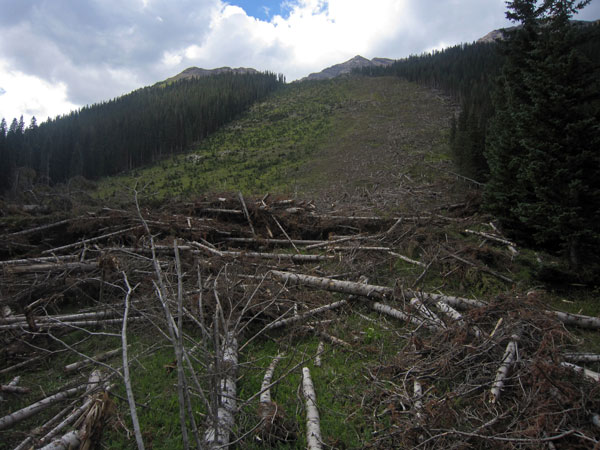 We came up on an interesting slide path that came down from the Thunder/Lightning area to East Maroon Creek. In what must have been a 100 year cycle avalanche, but on only half of the slide path, hundreds, if not a few thousand trees had been uprooted. 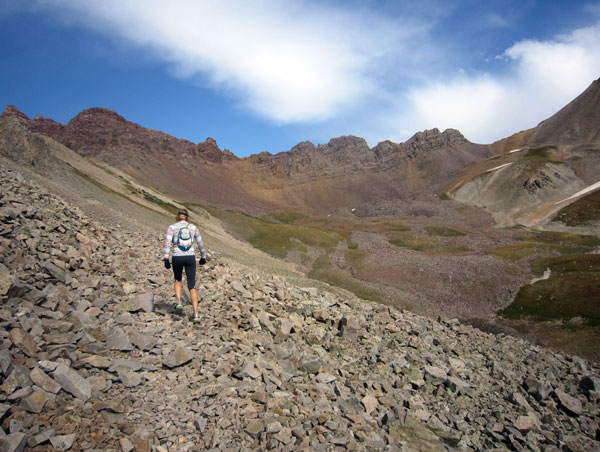 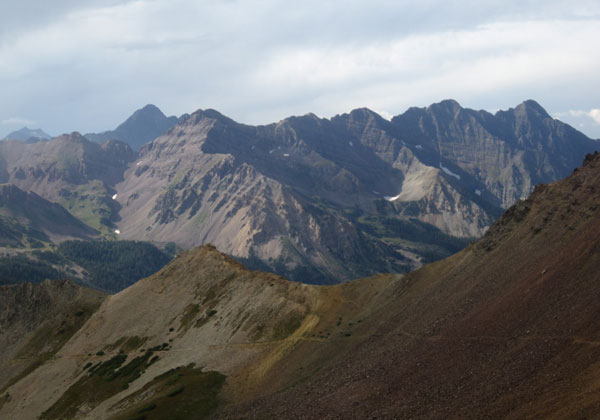 From near the pass we could look back and see Snowmass Mountain way out to the far left, and South Maroon Peak just to its right. We were near both peaks earlier in the day. The ridge from Len Shoemaker Peak to Pyramid, the route Neal and I traversed a few weeks back, runs from center-left to right. The Triangle Pass trail can be seen in the foreground. 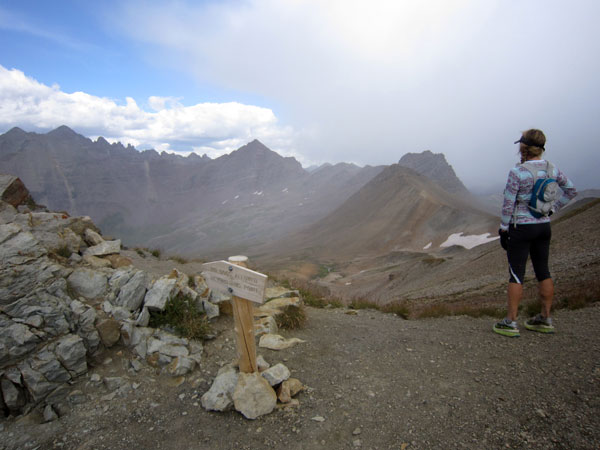 Christy looks out over Conundrum Creek towards Castle Peak as another storm cell moves in. And a new sign placed here greets us saying only “NO DOGS ALLOWED BEYOND THIS POINT”. A couple thousand backpackers and hundreds of dogs camp up at the hot springs every summer. Unfortunately, in addition to the common issues associated with dogs in wilderness, the sanitation problems from human and dog waste have forced a ban on all canines at the popular hot springs a few miles below.

What a day. As our first time covering all this ground in this style, our main take-away from the day was how lucky we are to live in a place where, even after years and years of getting out as much as possible, there are still so many new things to do. And if you’re not interested in the light and fast strategy, do this as a two, three, or even four night backpack for a more fun and less crowded alternative to the uber-popular and congested Four Pass Loop. Go give it a look. 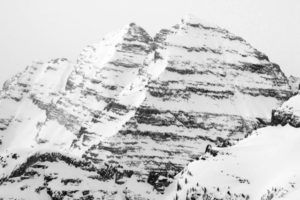 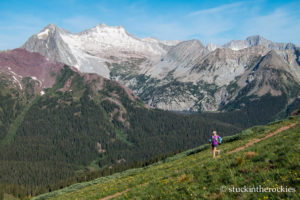 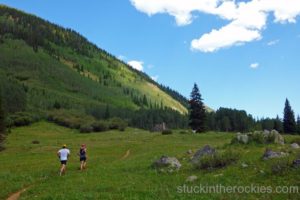