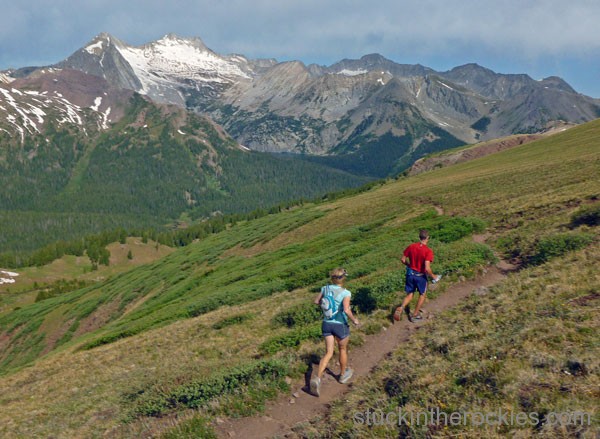 Chase and Christy take off down to Snowmass Creek. Snowmass Mountain looks to have the snow cover more typical of August.

One silver lining of a light winter is that the summer routes on the peaks and the trails are clear of snow earlier than usual. Christy, Chase Edgerton, and I ran the Four Pass Loop last Saturday, about a month or so before we’ve been able to do it in year’s past. 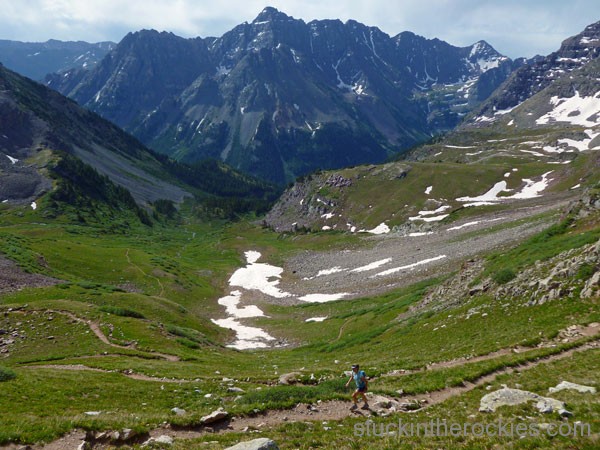 It was snow-free up Buckskin Pass. Even Pyramid Peak looked to be clear.

While it is very dry, rather than join the “sky is falling” camp declaring that everything is going to burn, we’ve been looking at things more from the half-full perspective, that is, it’s been nice to have summer arrive early. Last year it snowed so far into spring that when we first ran this loop on July 31st, it was still a muddy, snowy mess. All of the trails here took forever to dry out. It’ll rain eventually, it always does, but for now, I’m sure a lot of people will be happy to know that the high routes are clear, so get out there. 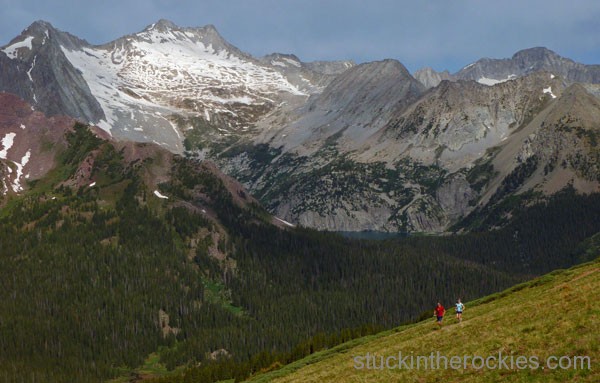 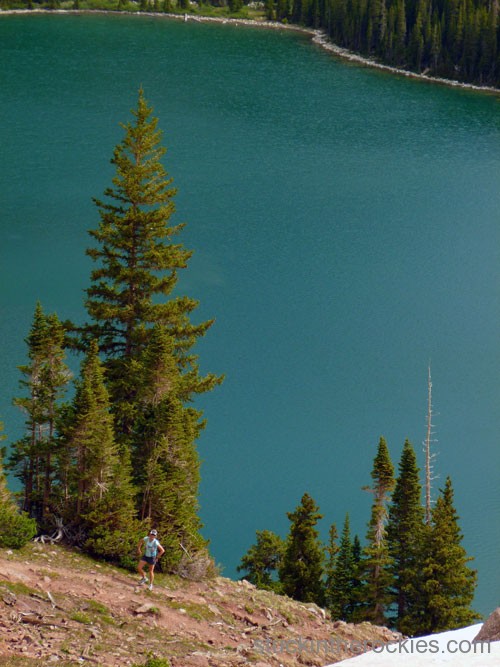 There were a couple of patches on the Trail Rider Pass side of Snowmass Lake, but they’re going fast. 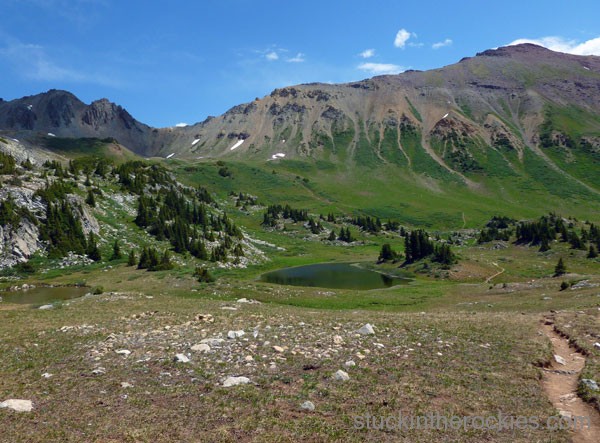 And the Fravert Basin side of Trail Rider was all clear. 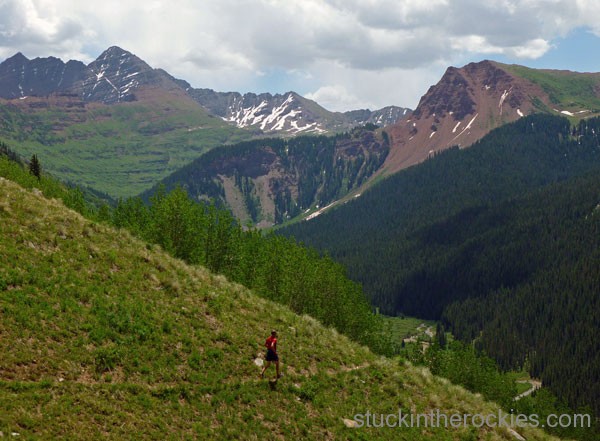 Fravert Basin was dry like mid-summer. Higher up there was some easily managed snow on the switchbacks of Frigid Air Pass.

The Bells, Fravert Basin, and Christy from atop Frigid Air Pass. 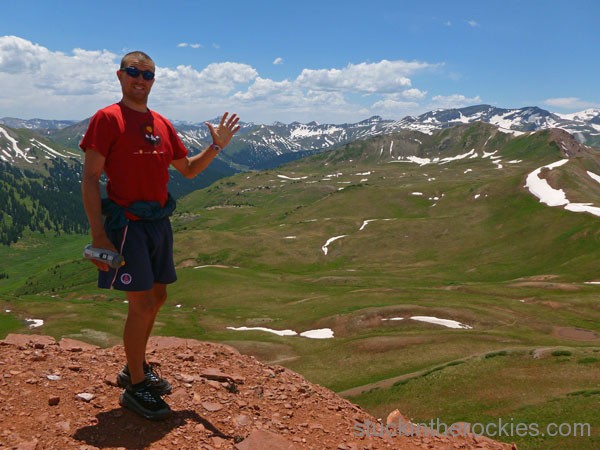 Chase, and the CB side of Frigid Air. No problem there.

Frigid Air Pass from below. The faint trail goes up to the saddle. 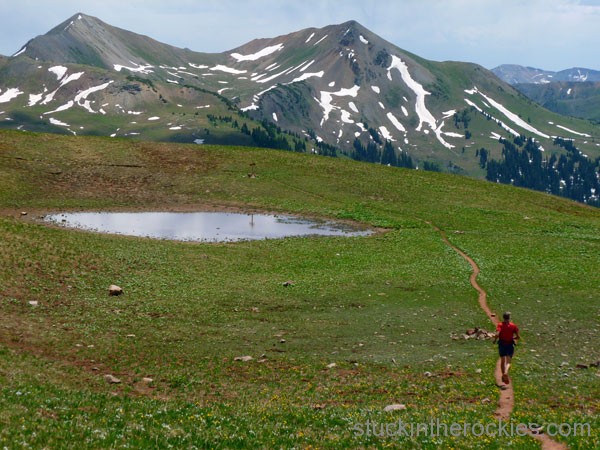 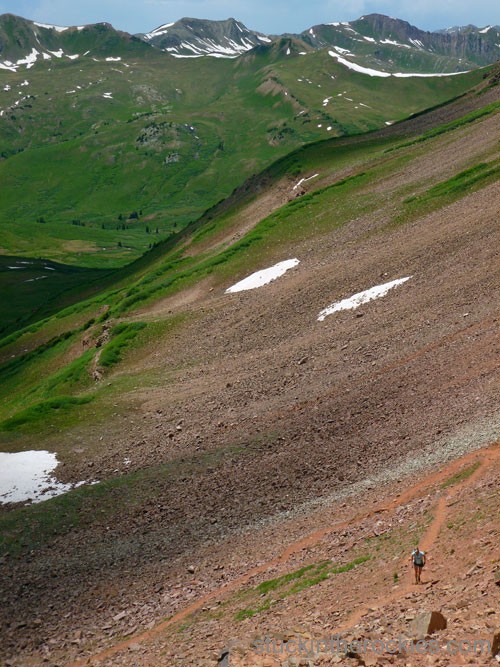 Christy slogs up the last bit to West Maroon Pass before the six mile run back to the trailhead. 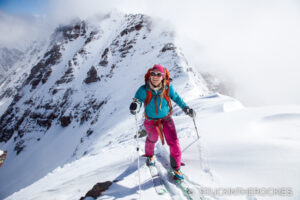 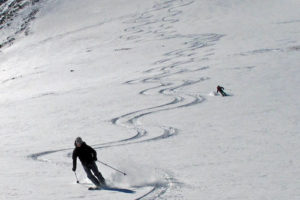 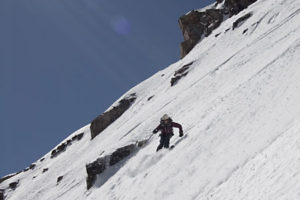