We headed up to Cotton Lake in the Sangre de Cristo Mountains this past weekend for a combo trail run/peak bagging jaunt.

For background, we spent a weekend in the area last summer, exploring nearby Rito Alto and Wild Cherry creeks, running the valley trails and then climbing onto the broad ridges above them, tagging whatever summits were nearby. There were few people and lots of wildlife, in fact, Christy nearly ran right into an unsuspecting bear right on the trail. Because it was such a fun way to see a big new area, we decided to take a look at the map and find a new zone to go and explore. Maybe we would even see another bear.

We chose to go run up to Cotton Lake, and to the peaks above.

For measurements sake, we covered a little more than 26 miles and climbed 7,500 vertical feet. We ran on parts of two different new trails, cruised to a lake we had never seen before, and got up on the ridge of the Sangres, tagging the summit of four new 13ers.

That wasn’t even the cool part though. On the way in and out we saw eight pronghorn antelope bouncing around, something you just don’t see in Aspen. Once on the ridge, we came up on some 30 elk, mostly cows and about a half dozen tiny calves, scampering about, near the 13,500 foot summits. And still better yet were the two different bear encounters on the trail, and at pretty close range. Combine that with the best statistic of all, that we saw zero other people, and I’d say we had a good day.

Without going into too many details, we began at the Cotton Creek Trailhead, 8,583 ft., on the west side of the Sangre de Cristos. The 8-plus mile trail climbs 3,000 feet up to Cotton Lake at 11,550 ft. and is shaded, scenic, and apart from the occasional downed tree across the trail, completely runnable. Once at the lake, which would be an incedible backpacking destination in itself, the trail steepens a bit up to a pass at 12,500. After one final thousand foot stretch on the trail-less grassy tundra, we were on the summit of Silver Peak (13,513 ft.), on the spine of the Sangres.

As we cruised north, we could see Rito Alto to the south. We came up on the bulk of the elk between Mount Marcy and Gibbs Peak, where we stopped in acknowledgment of the Gibbs family name in Christy’s lineage (she’s also somehow related to Buffalo Bill). On tired legs we climbed up to De Anza Peak, ate our remaining food and continued north towards the Horsethief Trail. The switchbacking trail descends from the ridge to the Cotton Lake Trail, where we saw the bears earlier, which we took all the way back to the trailhead.

Here are some more photos from the day: 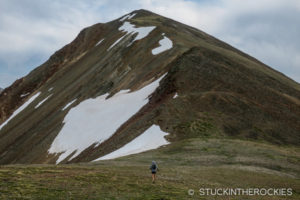 A big lolloipop loop around Cronin Peak with several bicentennial 13ers and lots of time high on ridges. 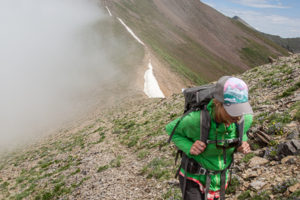 Once on the ridge, a place we had been before, the clouds kept rolling around the west side, slowly building.

We’ve always insisted that some of the easiest peaks can present the biggest challenges. We had twice failed to reach the grassy summit of Electric Peak, 13,598 ft. in the Northern Sangre de Cristo Mountains.