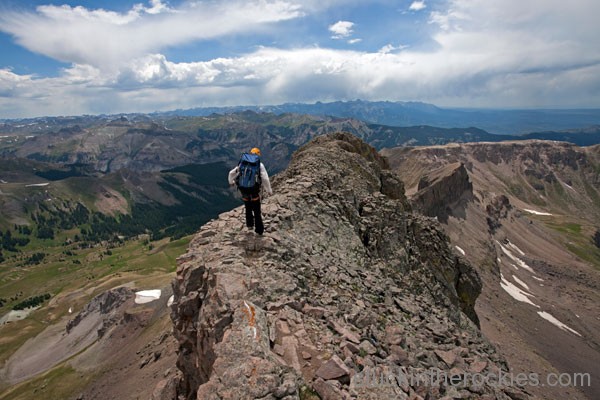 On the airy spine of Coxcomb.

I guess the 3rd time is the charm.

Back in 2006, despite a weather forecast for steady rain, Christy and I made the drive to Middle Cimarron Creek in the North San Juans, and backpacked high in the valley below Coxcomb Peak. We had long known of this uniquely shaped mountain near the Uncompahgre and Wetterhorn peaks, and had it on our list to climb. But the wet weather rendered some semi-technical stretches of climbing impractical and we never got to climb the peak. It turned into a fun, mellow, mushroom hunting, San Juan camping trip and we’d be back. 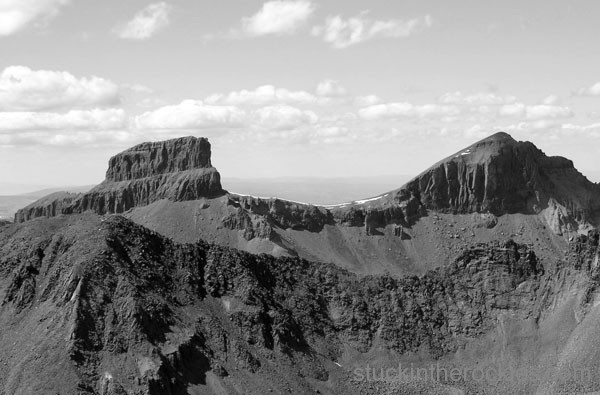 An old photo shows Coxcomb, on the left, as seen from Wetterhorn Peak to the east. The fin-like peak has broad east and west sides but from the north looks like a narrow spire. Redcliff is to the right. 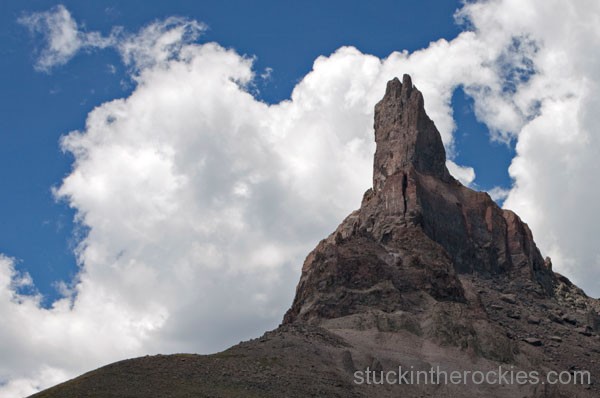 When viewed from the north, Coxcomb looks a whole lot harder to climb.

We returned two years later, not only to try to complete the climb, but with my more noble goal of getting engaged to be married. Unfortunately, the rain came in again, and the Plan A, that is, proposing to Christy on the summit, had to be improvised and I got down on one knee atop the nearby East Fork Pass. She said yes, so it was still a special weekend, but we once again failed on the climb. The mountain will always be there, so the saying goes.

Last weekend, another four years later, we made the trip down to Cimarron Creek again, and finally got to the summit of Coxcomb Peak. It was that much sweeter to scamper along the narrow ridge to the 13,656 foot summit, with the added history we had here. Some say that you only really know what success is like after experiencing failure, and as we made our way up the mountain, I think it was even more exciting than if we had got it done on our first try. It was a cool climb. 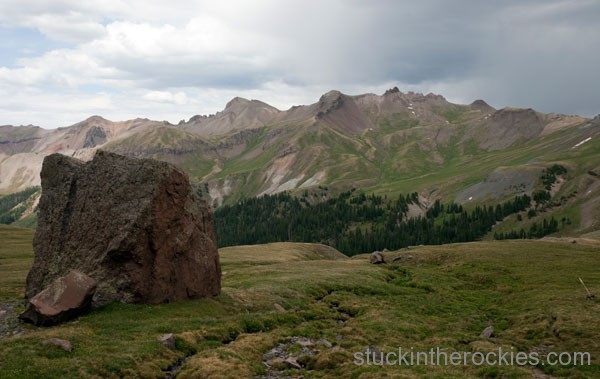 As for route beta, to reach the summit you have to climb a 5th class chimney where you might prefer to be on a rope. After getting on the ridge and heading towards the summit, there’s a mandatory 30 foot rappel down into a notch, after which you continue on towards the summit. The ridge is pretty airy and isn’t a place to be if there are T-storms overhead. 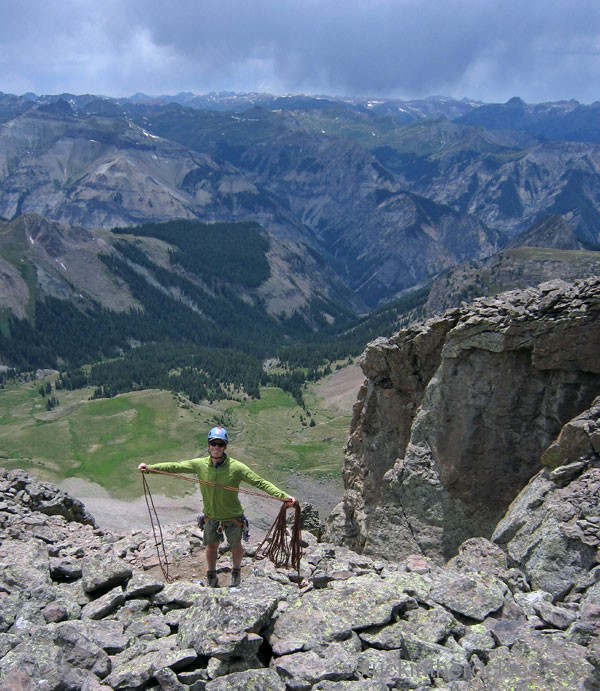 Atop the 5th class “aclove” as it’s called. 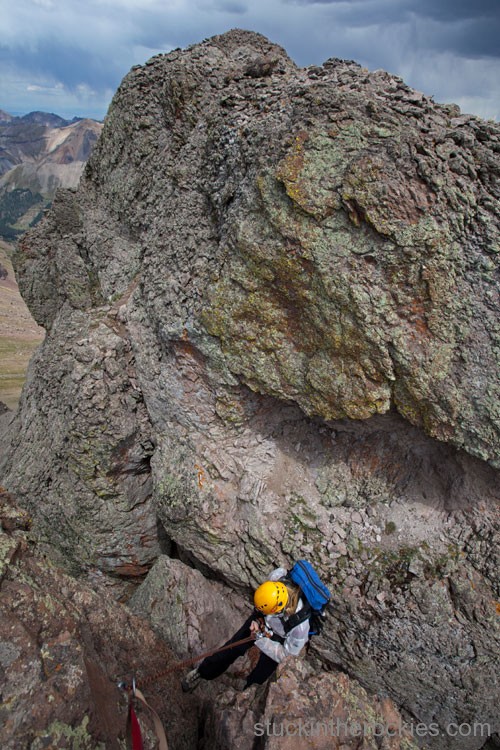 After you gain the fin-like ridge and head for the summit, a mandatory rappel is needed to continue towards the summit, which can be seen here in the background, at the top of the photo. 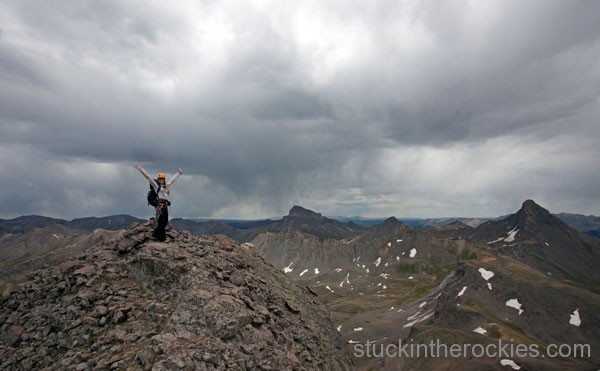 Six years after our first attempt here, we finally made it to the summit. Storms surrounded us but nothing came directly our way. Uncompahgre, Matterhorn, and Wetterhorn are out there, left to right. 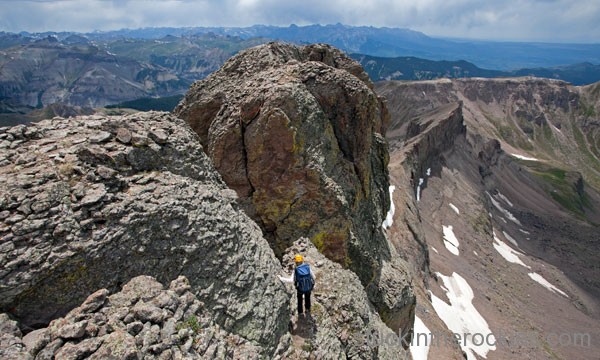 Christy retraces the route, back to the notch we rappeled. By leaving the rope in place (pictured), we could belay each other back up the crack. 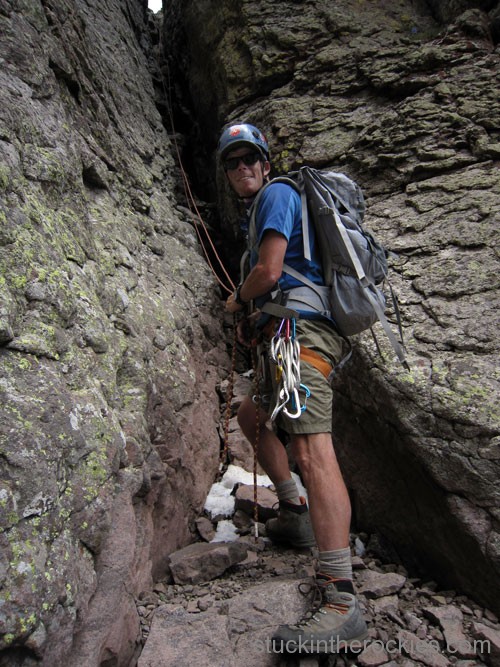 At the bottom of the alcove rappel. We actually climbed a chimney more to the lookers left of this shaded cleft.

Thankfully, the weather held, though it was a bit stormy around us. After some time on the long awaited summit, we retraced our path back down. Having left the rappel rope in place, we tied in and belayed each other back up out of the notch. We pulled the rope up and headed to the 5th class gully where a second rappel (a 50m rope, doubled, made it to the bottom) got us off the ridge and down to the talus slopes below.

We were back in camp a couple hours later, with a sweet view of the mountain and the satisfaction of finally having climbed Coxcomb. It was worth the wait. 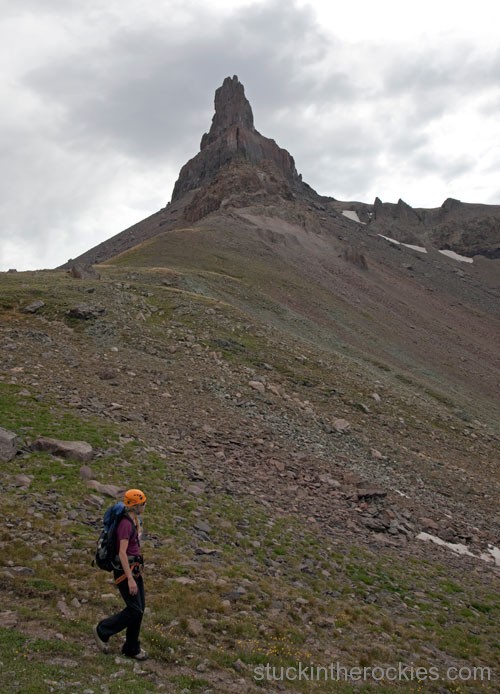 On the way back to camp, grateful the weather held out. 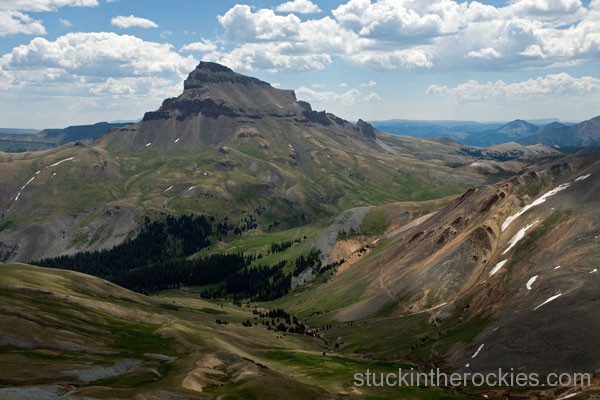 The massive West Face of Uncompahgre Peak from East Fork/Middle Fork Pass, or what we refer to as “Proposal Pass.” 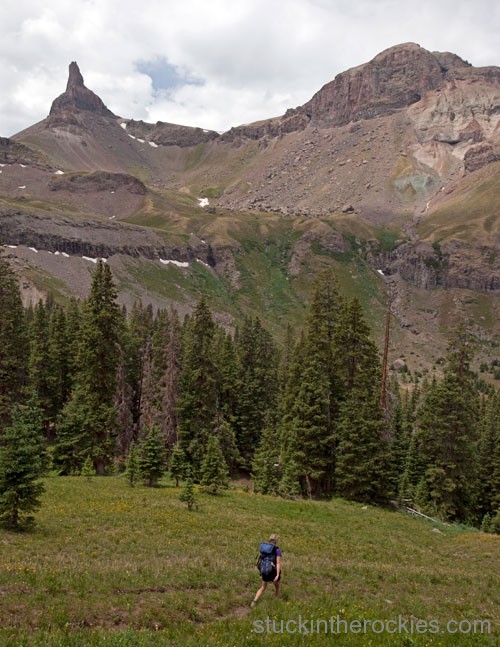 We’ve added this spot to our ever-growing list of faves.

On one of the many quiet summits in the area.

A backpacking getaway to Wetterhorn Creek in the San Juan mountains outside of Lake City. 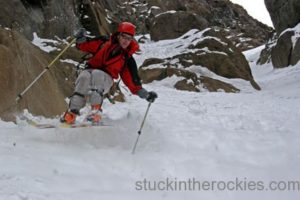 Past the pinch. Nice safety straps.

An early season ski descent of the Snake Couloir on Mount Sneffels. 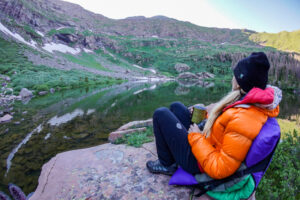 A weekend 13er peakbagging backpack trip to Horn Lakes in the Sangres.