We had been looking forward to skiing Vestal Peak since we began this whole project. So it seemed fitting that we would get to attempt it on the final day of what was already agreed to be an epic trip, our Weminuche Traverse.

After four challenging days moving through the mountains we found ourselves at camp along Vestal Creek, below the mountain’s dramatic North Face, a ramp of quartzite known as the Wham Ridge. The next day, we were hoping to climb and ski this awesome mountain and then break camp and make the big move down and out to the Animas River for the train pickup that afternoon, at 2:55pm. It would be a big effort. 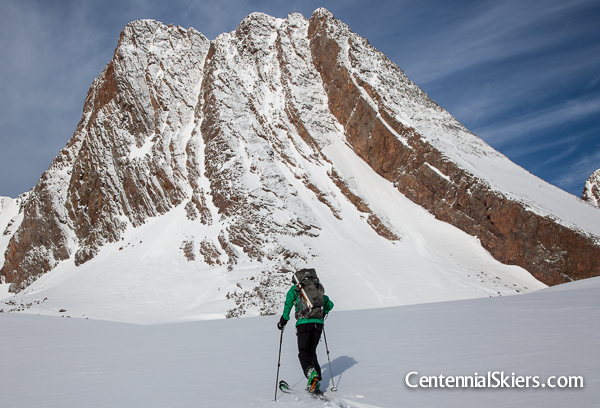 From camp in Vestal Creek it was an easy skin below the west side of the peak. Wham Ridge is the right skyline.

Despite its status as a classic Colorado climbing route, Wham Ridge wasn’t our ski goal. It only seems to hold skiable snow on its lower half, and a summit ski descent is what we wanted. So we set our sights on the mountain’s south side, where a narrow couloir led to a steep upper face, and a continuous (though very thin and rocky) ski line right from the top. 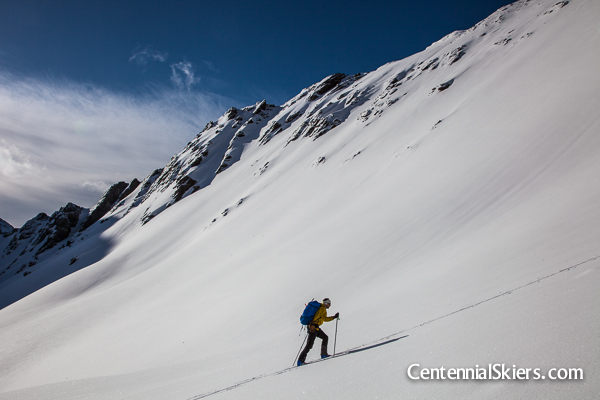 It was the nicest morning in a few days. Dav on his way up to the saddle between Vestal and West Trinity. 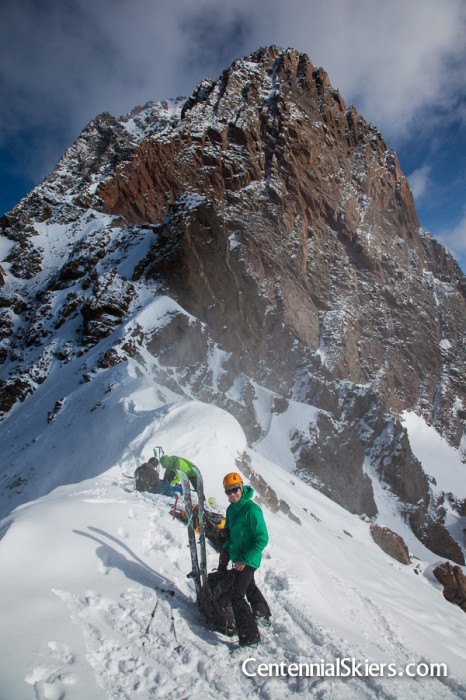 Once on the saddle we switched from skins to crampons. 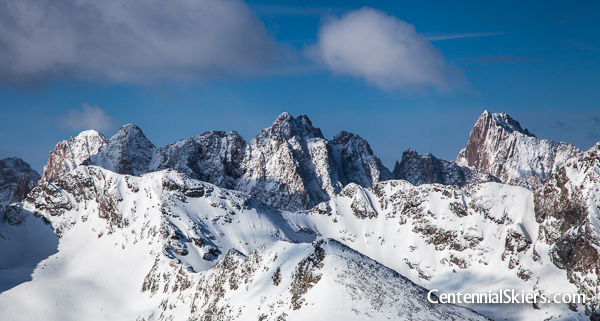 The view to the south.

The climbing was really exciting. The semi-technical, mixed terrain increased in angle as we moved higher, and wind and blowing spindrift made everything a bit more gripping. But once we were on top and we could look down the line of Grenadiers to the east, and to the impressive Needle Mountains to the south, we were all keenly aware that we were experiencing something special. 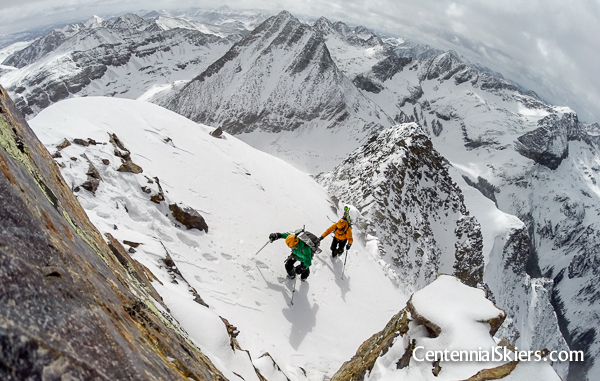 Christy and Sean top out. 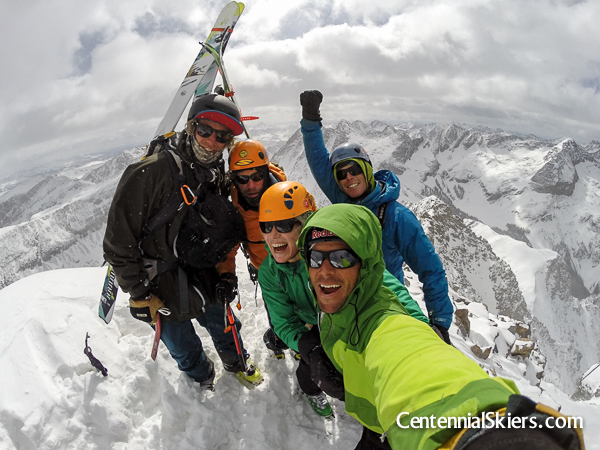 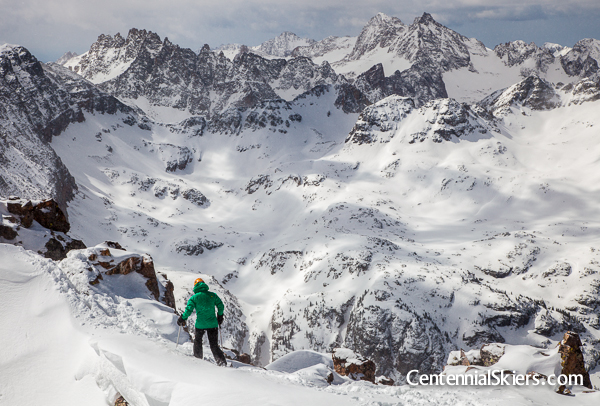 After playing around on the summit ridge it was time to suit up and ski. We had a train to catch.You can see Jagged and the 14ers to our south.

The skiing was pretty fun, committing off the top with some delicate moves through exposed rock, but it was filled in enough to allow for a continuous descent. At the bottom of the couloir we traversed back to the mountain’s long east ridge saddle with West Trinity Peak and cruised north facing powder all the way back down to camp. 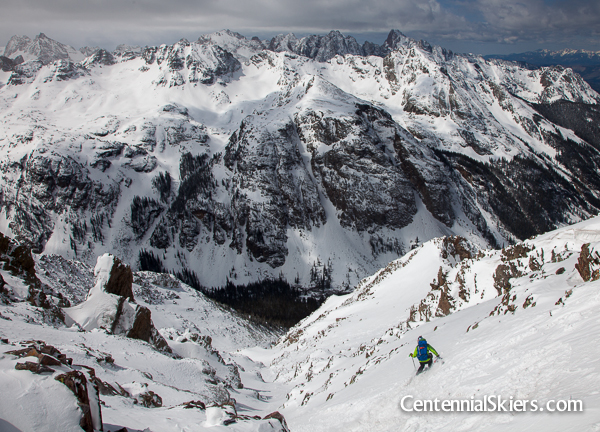 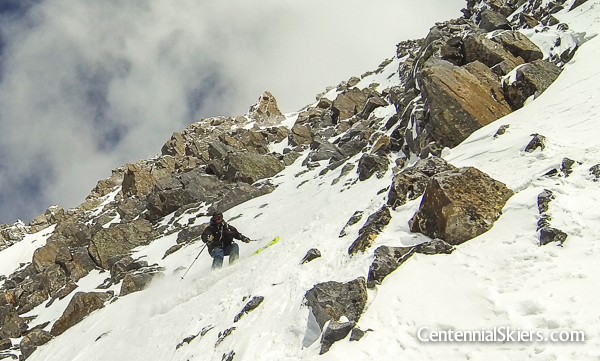 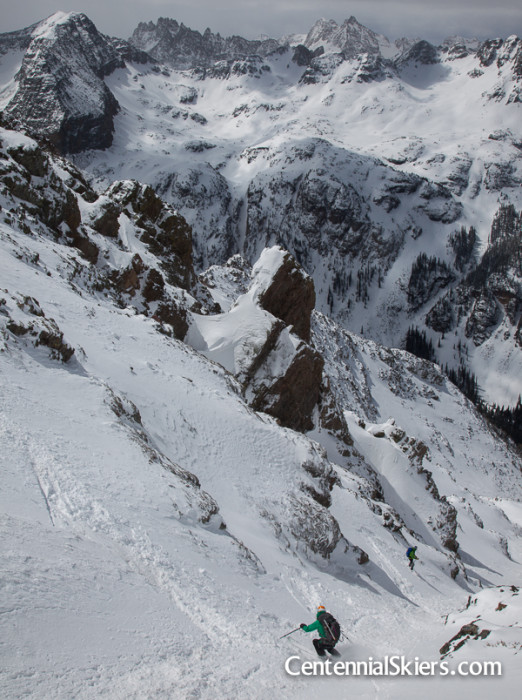 Sean and Ian track up the powder back down to camp from the Vestal/Trinity saddle.

Vestal delivered. It was a memorable outing, which was augmented by the hustle that ensued to catch the train. Many beers were consumed to honor this five star day (and week).

Check out Vestal. The big effort to get there will definitely be rewarded. 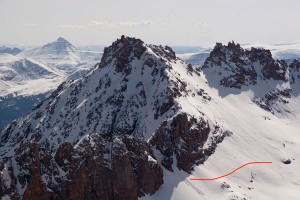 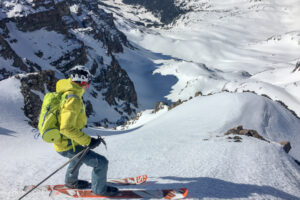