Two weeks after Mt. Democrat and after a recovery from our horrendous sunburns, I decided a solo Bross attempt was in order.

It was a pretty uneventful day. I drove near the trailhead we used for Mt. Lincoln two weeks earlier and started skinning up Moose Gulch. I managed to skin all the way to the summit plateau where the heavy winds that the peak regularly contends with transformed the snow into sastrugi, a sort of wind sculpted, desert/beach sand patterned look. While lousy for skiing, the nice thing is that snow of this nature is very stable from an avalanche perspective.

This was my first trip to Bross. At the top of the snow I looked across its wind scoured summit plateau which is so flat I couldn’t discern where the highest physical point resided. There were a half dozen or so rock walls built up as wind breaks, and after walking around I found on with a summit register on the ground. I don’t know if you can ever ski from this point, with so much wind I think the only ski option is to walk across the plateau to the top of Moose Gulch to ski. In linear distance across it might be 200 feet, in terms of vertical feet descended it feels like only a few.

Some 14ers are more interesting than others, we all know this. The list is set though, and the less interesting peaks need to be visited as well. Bross is lucky to be on the list, otherwise very few people would visit here.

Mount Bierstadt, next, is another. Sorry for the lack of photos. 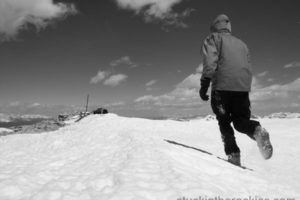 The Writing’s on the Snow Christy gets down with the[...]