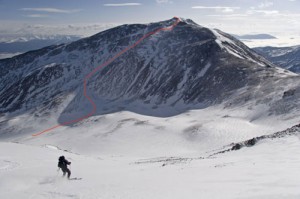 The caller ID said Lou Dawson. The father and son duo were thinking about a trip to Belford and Oxford and offered up the invite. So Christy and I met them, along with Jordan White, at the Missouri Gulch TH the evening before.

Aside from a single spring ski day up on Independence Pass, I hadn’t spent much time with Lou, and considering what I find myself into these days, I owe a good amount of credit to him as an influence. Not so much as a direct mentor, but having hailed from Long Island all of my mountaineering experience came during my years out here, often with his guidebook in hand. I was green to all of this until the day I borrowed skins and some Alpine Trekkers and tagged along on a trip to ski Mount Sopris. Later that summer, I climbed Pyramid Peak, then bought his guidebook, and went to work.

What didn’t sound so fun was the 3:30 a.m. revelry the mentor suggested, but what can you do? He’s the boss- right? Surprised since it’s only a few miles to the summit, and being accustomed to calling the shots and liking to sleep in whenever possible, I wasn’t sure if I should say anything. I didn’t want him to look down on me. Maybe he would consider a later start reckless? There’s a relevant cliche here, something to do with respecting one with wisdom, age or experience, I can’t recall. So I told Lou I thought 3:30 was just what we were thinking, and went back to the truck to break the news to Christy– she thought I was joking. She likes to stay in the sleeping bag even more than me!

Moving on, the snow started a few hundred yards from the truck, so we skinned the switchbacking trail to treeline and headed for the low angle couloir lookers left of Belford’s Northwest Ridge. Near the top, the steep skinning forced a transition to boots, and we arrived at the summit, early of course. Early was good though, the rocky nub atop Belford never holds snow so we pulled out the shovels and dug ourselves a kicker. It was fun, kept us warm and provided a few laughs at the acrobatics witnessed.

Once off the top we skied down the northeast side towards Oxford. Excited to have claimed another summit, for the new skis I was on and for the company present, just to name a few reasons, I charged down until some breakable snow had me on my head. Upon righting myself, with a fat lip and missing ski Lou mentioned, in full parental tone, that we might want to take it easy and not have any accidents. Just a little embarrassing, I quickly put it behind me.

We skied on down, hanging a right to meet up with the Oxford/Belford saddle, racking our skis and going for summit #2 of the day. The coverage on Oxford was poor and the winds were bad so we spent only a short time up there before billy-goating a line down the west side. Down in the basin we pulled out the skins and headed back across the Belford/Pecks Peak saddle and got ourselves back down into Missouri Gulch. We skied the tight switchbacks back to the TH.

Very fun day, due in particular to the new ski partners. Five weeks later, after some classic ski descents in the Tetons and Pacific Northwest as well as a trip to Iceland, I got back to the 14ers, with Tabegauche. 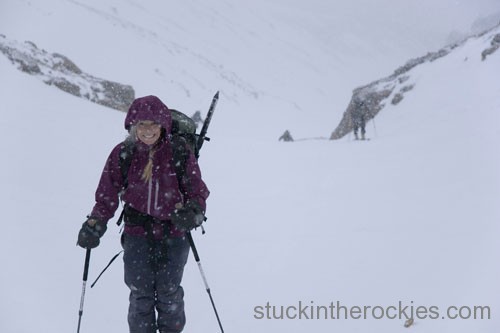 Christy, leading the charge up Belford. 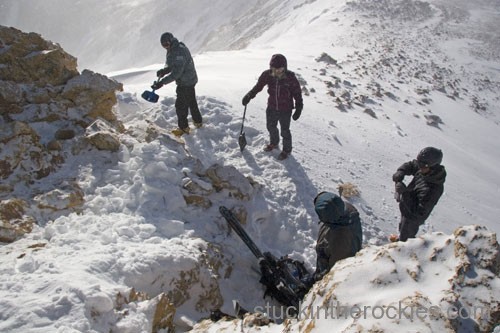 Quit standing around and dig! Building a kicker to get us off the true summit. 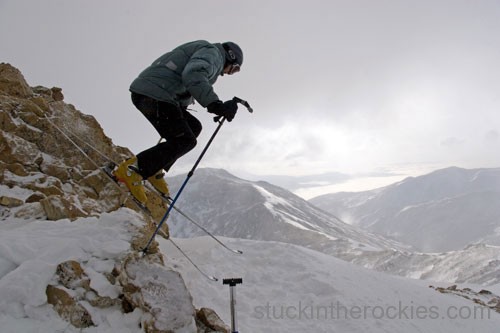 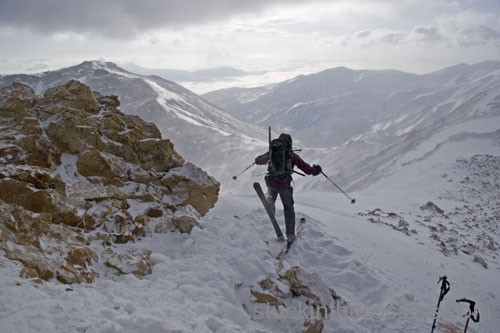 Christy gives it her best- heads up! 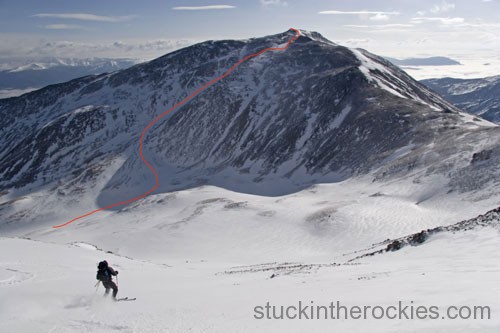 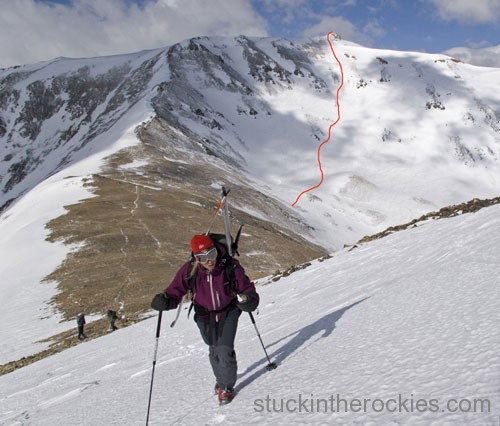 A quick break on the summit of Oxford. 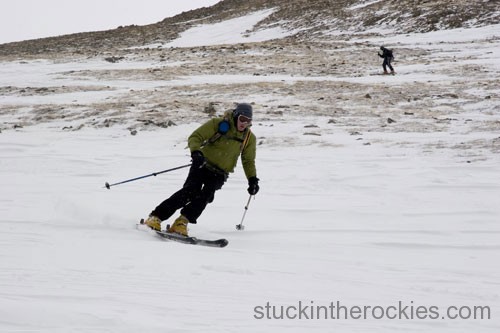 Lou managing to make it look good when it isn’t. 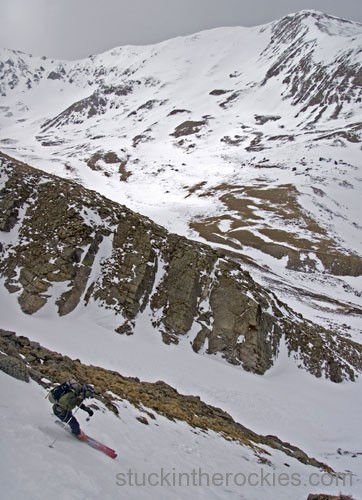 Louie heading back down to Missouri Gulch. 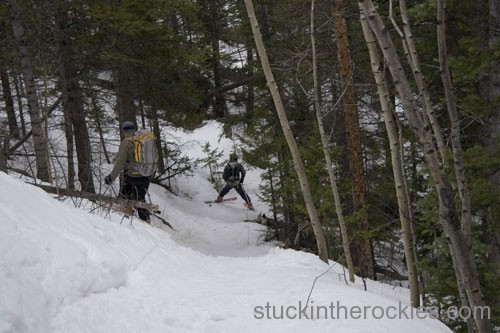 Switchbacking the luge course back down to the car.