The look and feel of the mountains around Colorado vary greatly. Deep in the San Juan’s Weminuche Wilderness, or in parts of the Elk Range, the peaks can be jagged and steep.  At times they seem to be stacked atop one another.

Other locales in the state aren’t graced with the same impressive landscape– with lower angles, dull skylines and flatter horizons. Saturday we skied Mount Sherman, 14,036 ft., a shining example of the latter.

The dotted line in the photo marks our ski line, which when compared to other 14ers feels like Panda Peak, a.k.a the weenie hill, at Buttermilk ski area (click all photos to enlarge).  Assuming that you always find it worthwhile to ski the more mundane peaks (this was my 3rd time here) the challenge becomes how to make a visit to a mountain such as Sherman look interesting in the photos. The answer– zoom in tight and crop even tighter.

When you’re surrounded by awesome backdrops, be it cool looking peaks or the walls of a couloir, open up the lens. Bring a wide angle if it’s an option and try to set up the shot so as to include the scenery and frame the skier against the dramatic backdrop.

When your wide angle view looks less than inspiring, which at times was the case here today, tighten up the shot and remove the dull features. Set it up by standing a bit further away and then using the zoom to it’s fullest power.

The photo to the left is the original, uncropped shot of Christy I used at the top of the page, from near the summit and set against the backdrop of neighboring Mount Sheridan. Sure it works, but if you zoom in and pull the rocky face into the frame it becomes more dramatic (I could have been even closer to her than I was). Cropping it even tighter, as seen in the photo at the top, gives Christy’s ski line a different feel, on a mountain many might not recognize as Sherman. Compare the two.

Here’s another shot of Christy climbing, fully zoomed in to emphasize the steep slope behind her. Though this shot doesn’t exactly convey an extreme feel, the other wider angled shots I had that included the flat horizon only look less dramatic.

As for the trip itself, it was four hours car-to-car and it was as good a day as I’ve had on Mount Sherman, at least as far as weather, wind and snow conditions go. It was a stark contrast to what Dav and I found here on the last trip here. And that’s #34 of Christy’s 14er skier descents. Only twenty left!

Here’s a parting shot of Christy cruising the lower slopes. 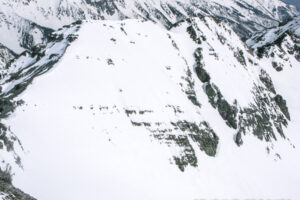 The East Face of Conundrum Peak as seen from Castle. The wide face lookers-left of the couloir offer several spring skiing options.

The East Face of Conundrum Peak, a great option for skiing this Aspen area 14er. 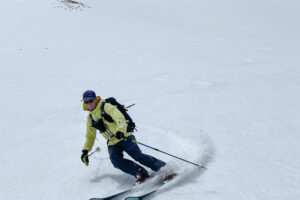