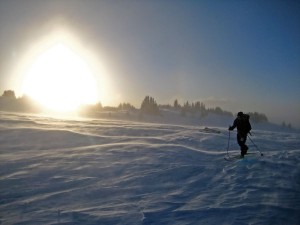 The 12th Annual Elk Mountain Grand Traverse was held this past weekend. Nearly 130 teams of two lined up for the midnight start at the Crested Butte High School, ready to make the 40 mile ski pilgrimage through the night to Aspen. This year’s race was marked by single digit temperatures and driving winds up high which most participants took in stride, because anyone who has done this race knows– it’s never ordinary out there. It’s always something at the Traverse.

Christy and I have finished the race nine times now, three of them as a team, and agree that the course can rarely be described as “typical.” Be it gear issues, weather problems, partner troubles, or some combination of the three, each year seems to present a unique challenge of some sort. Here’s a brief recount of some of the highlights through the years, at least for us–

2009 was another cold one with high winds at both Star and Taylor passes which contributed to the near 35 DNF’s. True to form, Christy had her down mittens on all the way to Barnard Hut. And in the style of a couple of rookies, the single digit temps froze our water in the tubes right in the beginning and we never really got it straightened out. Afterwards, at the finish, Christy noted her Camelbak was pretty close to full, carrying it by her chest to thaw but ultimately staying frozen all night and drinking next to none of it. She carried the near five pounds of water all the way home. Ground blizzard conditions up high sandblasted exposed skin leaving some with frost nipped noses and cheeks. Christy’s natural gag reflex for GU had her spitting it back up repeatedly. The rest of our “real food” was all frozen up. 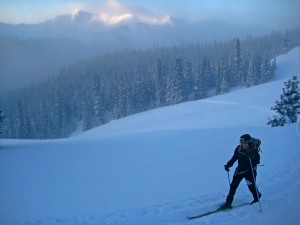 There was some good in it though. More than two feet of snow had fallen in the days before the race which made the stretch between the passes really cool. Even though sunrise is usually the coldest time of the race, we had about an hour and a half where we didn’t see another team and we just plodded along the track, all bundled up. Thanks to the leaders for getting the trail right this time. (click any photo to enlarge) The new snow also helped make the descents on the wimpy skis a bit less harrowing. At least the crashes don’t hurt as much. Around six in the morning, when you’re dropping into the steep bowl on the other side of Star Pass, in full darkness and on edgeless XC skis, that helps. I think that if there’s one consistent thing year after year, it’s the feeling just before descending into the dark abyss, with only a faint glimmer of a headlamp or two down below showing the way home. That moment is a thrill every year. 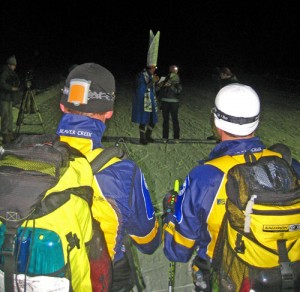 And what of this photo? Well, our place at the start line, while listening to the final prayer before our send off, was from right behind last years victors, Mike Kloser and Jay Henry. And who were we kidding, lining up immediately behind Mike, the soon-to-be five time winner and course record holder?  Well, in our defense we were told this year they would begin the race with a rolling start, a more civilized slower option to the usual sprint where the ensuing carnage often leaves in its wake a scattering of trampled skiers and broken poles. So we figured since it would be a slower pace off the line, we could start further up towards the front.  We just kind of found ourselves there. As the prayer concluded and mere seconds before the gun went off, the announcement was made that the rolling start wouldn’t actually happen and it would be the standard free-for-all, and good luck to everyone with that. Yikes. It was too late. We were locked in our place up at the front and had our skins on. When the gun went off we were instantly consumed by the pack of sprinting skaters, and then spit out the back.  In hindsight it was pretty funny. Sorry to anyone who found us in their way. 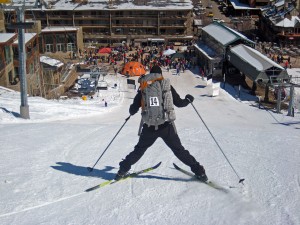 And soon enough it was over.

Here’s Christy showing off her best “Flying Wedge,” arriving at the gondola at 11:14 AM, earning us 19th place and 3rd in the coed division, again. (Click here for results)

That works for us. Two minutes later we were rehydrating with a couple of beers. And if we get our tenth finish next year we agreed to take a year off. We’ll see. 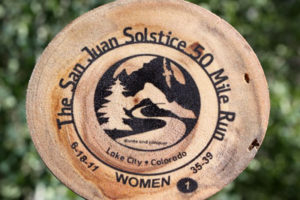 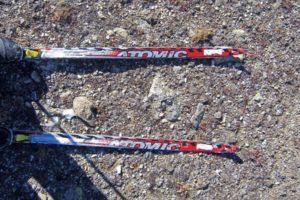