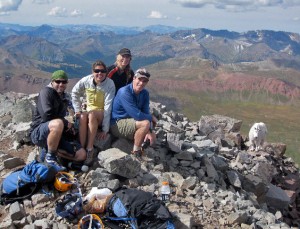 South Maroon- just the five of us– (l to r)Kent, Lissa, Christy, myself and “Pat” the goat. I couldn’t discern it’s sex so, like the SNL skit, I named it “Pat” (photo courtesy of Lissa’s camera shot by some solo guy from Gorky, Russia). Click all pics to enlarge.

Christy, Lissa, Kent Harvey and I did the Maroon Bells Traverse on Saturday, twice. And I came home with a lot of mountain goats pics.

Wait, twice? Well, when it comes to traversing the Bells, there are more than a dozen different combinations concerning which route to climb, direction to traverse and how to descend.  And speaking for myself, when making those decisions and planning the day, I take steps to avoid using the South Ridge. In order to do that, we made the run across the ridge two times.

Frowned upon by many, the South Ridge of South Maroon Peak– considered by many to be the least technical path of ascent, descent or both, and the ‘standard’ route on the south peak– is in my opinion an out of the way, time consuming, tedious way to go. Descending via this ridge sends you in the opposite direction of the trailhead and it results in an extra long day when used as a round trip route. Nevermind that the loose quality of the rock on the ridge and the extended 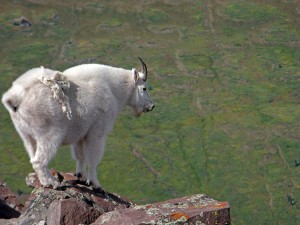 time it spends in the crosshairs of lightning and afternoon storms is at best, unpleasant, and at worst– when the thunder’s booming– scary.  One friend of ours has gone so far as to declare his intention to build a career as an Aspen area guide and never use this route. So far, after nearly ten years of guiding here, he has managed to stay true to his goal. I think I’ve made my point, but in sum, after a couple of climbs “back in the day” via this route, I’ve since found myself avoiding it whenever possible. 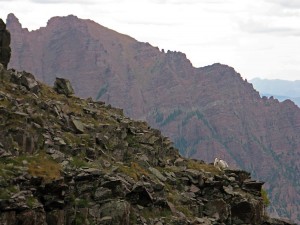 In reality, at least for much of the year, avoiding the South Ridge is a reasonable request. During the winter, spring and a good part of the summer season, when snow is present in the couloirs, there exists a number of snow-climb options to ascend and descend the South Peak without setting foot on the South Ridge. For many including myself, it’s much more fun to climb either the Bellcord or Y-couloirs anyway. But come late summer, when the couloirs dry out, so to do the options. With the couloir climbing season pretty much finished, we opted to climb North Maroon first, completed the traverse over to South, and then traversed back to North, descending from there back down the Grassy Gully.

A few thoughts on this double traverse:

Give it a go and see. Or don’t. But if someone told me it was both more fun AND faster, I’d go that way for sure. 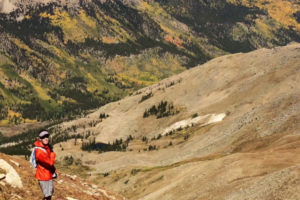 Fall is in the air. Ted, on the route down the north side of Harvard. 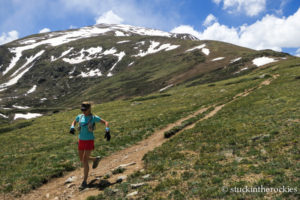 Christy, nearing treeline on the descent with the long ridge from the summit we just descended behind.

Christy and I went to Twin Lakes to run Mount Elbert last weekend, a favorite outing of ours and a pretty novel running experience considering it's the tallest mountain in the state.