From the summit of Resolution Mountain, we could see the Fowler-Hilliard Hut below. We took photos as we watched the sun slowly set, and conversations ensued— about the surrounding mountains, future running plans, and the adventure we were wrapping up. Beers were passed around, and the group of friends— all strangers just one week ago— cracked them open and toasted to the moment.

There was reason to celebrate— it was the last night of Hut Run Hut. Five days earlier, the group assembled in downtown Aspen and began the trek on foot north towards Vail. Over nearly a week, the group ran and hiked 100 miles of single track, jeep roads, and alpine ridges, staying in five different 10th Mountain Division huts along the way.

Coloradans are familiar with the huts as a winter amenity. They can provide a fun night out in the mountains with friends or as a backcountry base camp for skiing. But many of these remote cabins are also open in the summer months, and with a bit of organizing, they can provide the framework for some incredible summer adventures.

Rickey Gates, Aspen native and trail runner extraordinaire, always recognized their potential. As a kid growing up in Aspen, he had been on his share of hut adventures. Later, as an employee of the 10th Mountain Division Hut Association, he got to know the network of remote mountain cabins even better.

He realized that a multi-day, hut-based, trail-running adventure would be an incredible way to explore our local mountains and trails. So he crafted an adventurous route that utilized the huts connecting Aspen and the small town of Red Cliff, near Vail, and in 2013 Hut Run Hut was born. Since then, he’s led several trips each summer, guiding up to 12 people of all ages and backgrounds along the route.

Leading a group of that size through the mountains over multiple days can not be done alone. A typical Hut Run Hut trip has two trail guides to keep everyone on the course and two other staff members to help with the vehicles, the gear shuttling and all the food preparation. For the past six years, I’ve been fortunate to have been able to join, helping Rickey as a trail guide on over ten Hut Run Hut trips.

Hut Run Hut is the pinnacle of hut-based Colorado summer adventuring. While I’m admittedly biased, I’m continually impressed by the meaningful experiences, new friendships, and challenges met out on the route— year after year.

The adventure starts at Wagner Park in downtown Aspen. After loading the vehicles with our overnight gear and duffels, we head up into the Hunter Creek Valley and down to Lenado via the Hobbit Trail, Four Corners, and the Tinpot Trail. We rendezvous with the vehicles for lunch and to refill water bottles, after which we head up to Margy’s Hut via Spruce Creek.

We’ll typically arrive at Margy’s Hut in mid-afternoon. By then, the vehicles are there, and the gear is unpacked. The appetizer spread is on the table, not far from the cooler of beer and other drinks. After covering eighteen miles on the trail, it’s nice to have a couple of hours to relax on the sunny deck before dinner.

The following morning, after coffee and breakfast, we pack up, hit the trail, and spend the day making our way to the next hut. And that’s the gist of the Hut Run Hut program.

From Margy’s Hut, the group hikes up to Mount Yeckel before descending to the Fryingpan Valley. We stop at Chapman Lake for a quick swim before proceeding to Nast Lake and lunch. Once back on the trail, we head to the remote Betty Bear Hut. By now, the group has settled into the routine, including adapting to life without cell service.

After a night at Betty Bear, the group follows a cross-country winter route over the Continental Divide via Hagerman Pass. We make a quick stop to check out the Skinner Hut before descending to lunch near Turquoise Lake.

We continue north on the Colorado Trail, aiming for Uncle Bud’s Hut, where we spend the third night of the journey. For group members who enjoy swimming in alpine lakes, we can stop at Bear Lake for a quick dip along the way.

The next day represents the longest leg of the trip, covering 23 miles, much of it on the smooth Colorado Trail. From Uncle Bud’s, the group heads to Tennessee Pass and continues north to Camp Hale, where we stop for food and fluids. The day finishes with an arduous climb up to Jackal Hut for the night.

There’s always a festive feel at Jackal Hut. It’s the highest hut in the 10th Mountain System, and we get there after the longest day of the route. The group members— all good friends at this point- have covered many miles since departing Aspen, and there’s a real sense of accomplishment.

The following day offers a bit of a reprieve. After the high mileage route to Jackal Hut, we get a break with a day of hiking in the alpine tundra. We climb up to Elk Ridge and crest several 12,000-foot peaks en route to Fowler Hilliard Hut— our fifth and final night of the trip.

Arriving at the Fowler Hilliard Hut feels different than the others. Even though the group still has one more day on the trail— we’ll run 11 miles down to Red Cliff the following morning— there’s a sense that the adventure is coming to a close.

The short climb from the hut to Resolution Mountain to watch the sunset is a fitting denouement. After five days of new trails and new huts, the summit of Resolution offers one last long view, a final mountain panorama for everyone to imprint in their minds.

The time on the summit allows for reflection on the defining moments of the trip. In particular, the feeling of being in the present, away from the constant connectivity and distraction of life and work. Of course, everyone would soon be returning to that world, but up on Resolution, surrounded by mountains, we could enjoy one last encore moment of being away.

Gazing south, we could see Mount Massive and Hagerman Pass, which we passed on foot four days and countless miles ago. As much as we didn’t want it to end, it was time to head down for one last dinner together. Like all good things, Hut Run Hut was coming to a close. What a fantastic trip.

This story originally ran in the Aspen Times Weekly on September 22, 2022 – read it here. 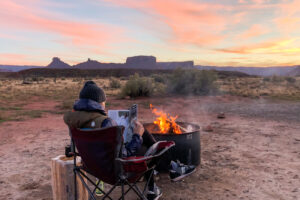 Looking ahead to mountain biking in the warmer days of spring. 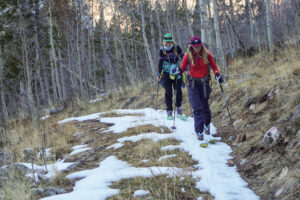 Does the weather phenomenon really control the winter season? 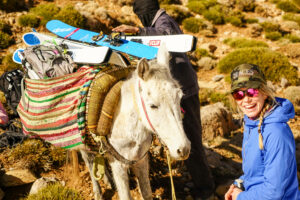