Skiing on the 4th!

The thought of skiing on July 4th seemed too fun to turn down.

Initially hoping to ski the “Fourth of July” bowl up on Independence Pass, when the reports came back that conditions there were pretty lean, and that Montezuma Basin and neighboring Conundrum Peak, 14,060 ft., were still loaded, the call went out to anyone interested.

At 6 am Tim Mutrie and I rendezvoused with Adam Moszynski and Glen Poulson at the start of the 4wd road. Lou and Lisa Dawson were there as was their friend Scott. We packed into three trucks and headed up the road which was passable to the second of the three sharp switchbacks up high. Not bad.

Adam Moszynski, Tim Mutrie and I cramponed up the Conundrum Couloir. In the background is Castle Peak, 14,265 ft., and a cool looking tarn.

From the top of the couloir Tim looks out towards Castle Peak. The others didn’t climb the couloir but instead climbed to the Castle/Conundrum saddle and then made there way over to the couloir. We met them on the summit.

Lou walks the dry ridge over the summit with Tim, Adam and Glen in front.

Once out of the couloir we met up with Scott and Lisa who hiked back to the Castle/Conundrum saddle and skied down from there. The lower slope actually skied even better than the couloir and while an extra lap down there might have been fun we opted out and followed some snowy ribbons of love down to near the trucks. What a morning. Lou agrees.

By noon we were back in Aspen and headed to the Art Museum party followed by the Cantina and ultimately to Lori’s to watch the fireworks. It was a full day and by 6am the next morning Christy and I were off again.

Even at 6 am big thunderheads could be seen out on the horizon as we made the 45 minute drive over Independence Pass. By 10am Christy and I were at 13,000 ft. on the 5th class ridge watching the clouds grow.

Several years back Dirk and I completed this route, one of the most technical the Sawatch Range offers, in 12 hours. At that pace we would be on La Plata’s summit-14,336 ft.- at around 3pm, typically right when the T-storms are nastiest. We would just wait an see what develops.

Though the route was pretty dry, the mountain was still holding a lot of snow. Back in 2005, Christy, Dirk and I skied the north face, pictured here in the background, below.

It was the ridge in the foreground that heads up to the left of the summit that was the objective today and you can see how it can eat up time. To stick to the goal of climbing ridge proper requires some careful route finding and possibly a rappel or two and is definitely a bad place to be if there is lightning around.

We arrived at a point we felt was about halfway and considered the options. The clouds were dark and we had a long way to go. It was 11:30. With a messy but manageable scree gully nearby we decided we should abort and come back on a better day. Not 5 minutes after we began down the gully did we hear several rolls of thunder.  Three hours later, when we arrived at the truck, it was pouring rain.

We would likely have just been arriving at the summit if we pushed on. Good call. To turn back or not is often a tough decision. Our Ellingwood Ridge mini loop took nine hours. When the weather pattern improves we’ll return and do the whole thing. 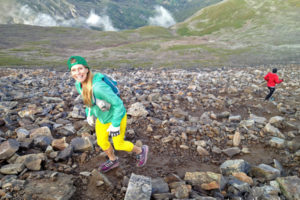 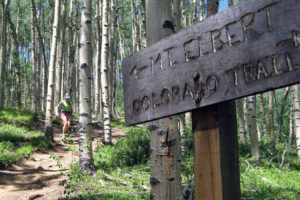 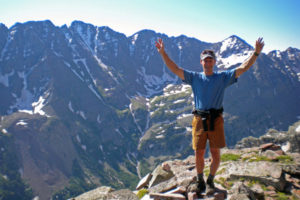 Neal Beidleman traversing snow to the entrance of the Grassy[...]