We wrapped up our San Juan road trip yesterday with a surprisingly fun ski descent of another Silverton area Centennial– Jones Mountain. I say surprising because we had been catching glimpses of Jones from up high in recent days and could never clearly observe continuous snow from the top.

From afar, the final few hundred vertical feet actually looked to be completely snow-free. In spite of the uncertainty of a summit descent, seven of us headed up Burns Gulch towards Jones with a little optimism and an awareness that there were aspects of the mountain we hadn’t been able to see (particularly on the east side), and that they might just hold snow. 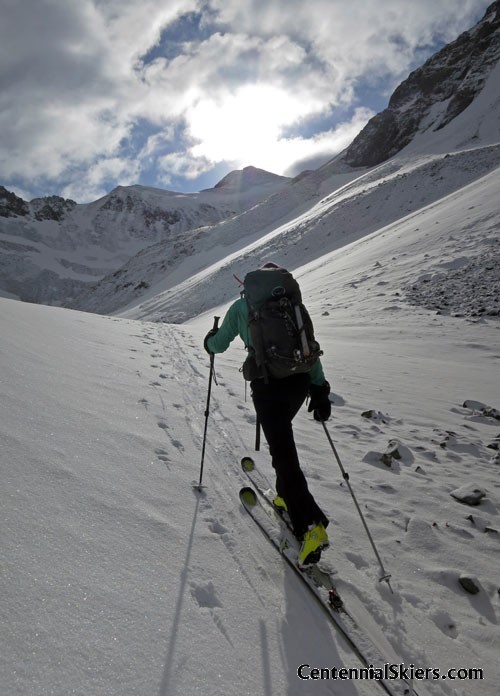 On the ascent up the northern arm of Burns Gulch.

So up we went from the west towards the bare summit, and sure enough, as we crested the top, a snow-filled east face appeared before us, allowing for several ski options. And as if that wasn’t good news enough, the mixed weather that came through Silverton the afternoon before left a few inches of May powder for us.

Once off the upper east face, we made our way back around towards Burns Gulch and found two beautiful ribbons of old snow with a fresh coat of paint on top. We blasted down to the valley, hootin’ and hollerin’ as we went, in what we agreed was some of the best snow we found all week. 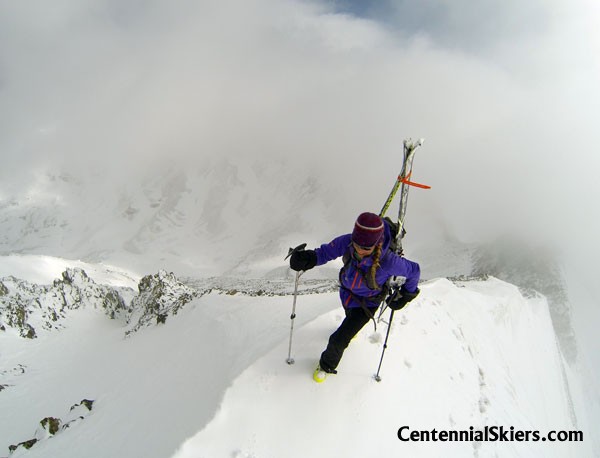 Arriving up top. The east face drops off the the right of the photo. 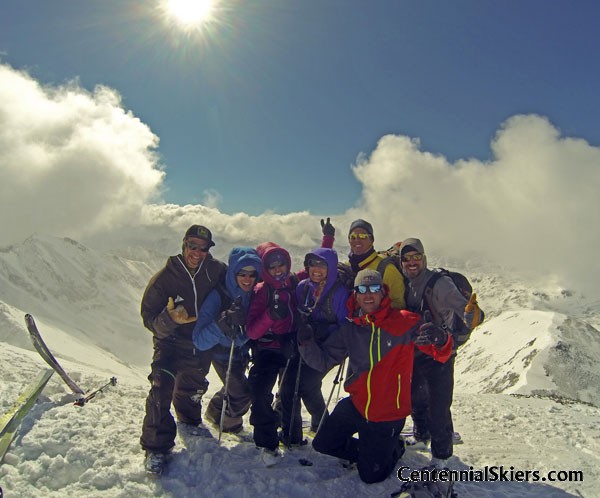 The group on top, with Anda giving Christy the rabbit ears. The in-and-out weather on the ascent broke for the ski down.

The phrase “it’s hard knowing not going” came to mind as I cruised the rolling slopes of the lower valley– both in regards to this day, and the whole Centennial Peaks project. As we started this day we were unsure if Jones would get checked off our list. It would’ve been a shame to waste a day climbing an unskiable peak, only to have to come back later to get it done right. But we also knew that we didn’t have all of the information, so we decided to take a chance, to just go and see. Sometimes uncertainty-turned-success makes a good day even better. 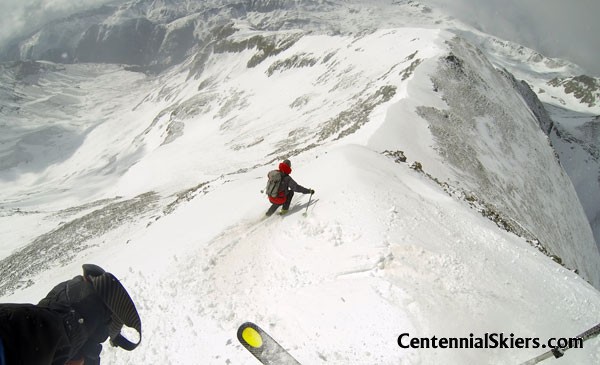 Following Dav off the top. The long, east facing run could be an alternate ski route if you were starting in the Lake City area. 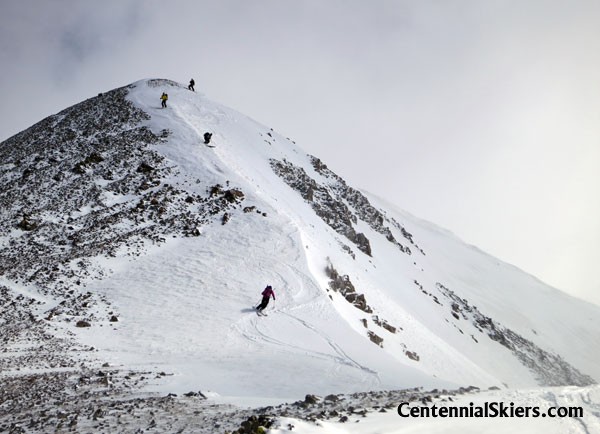 The group leaving the summit.

And to the bigger picture, our plan to ski all these high 13ers, with little or no prior info on many of them (who skis Jones Mountain?), requires us to embrace the go-and-see mantra. We won’t always know what were going to find. We might come up short once in a while, and we’re OK with that, but so far we’ve been totally thrilled with what we’ve found. 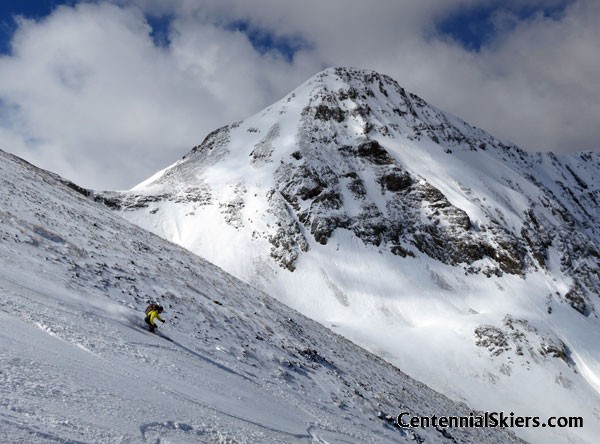 Chris Lane tears through the May powder. Niagara Peak, just a few feet shy of Centennial status, is behind. 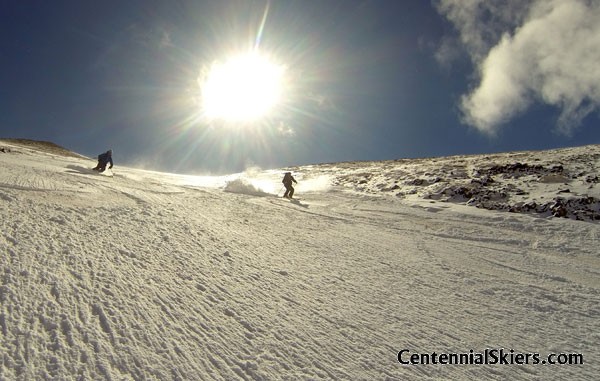 Ian and myself ski the best snow of the week, down the mountain’s SW side.

Today is much needed rest day, after which we’re going to head out for another week of skiing peaks. We’re into late May and don’t know how much longer the snow will last, but we’re just going to go and see what we find. I think it will be good. 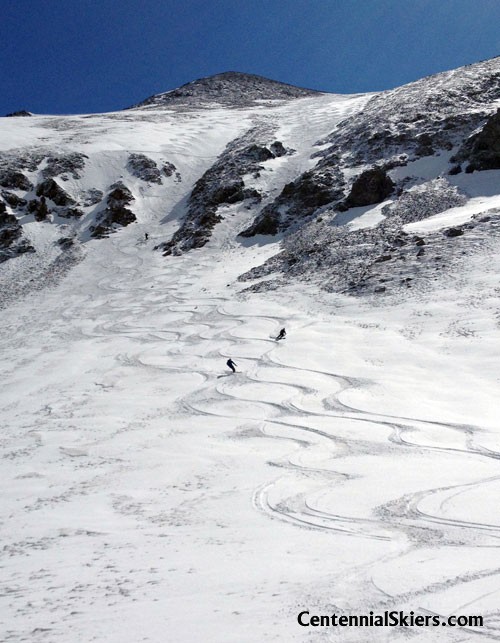 Leaving our mark. The bare southwest side of the summit can be seen. 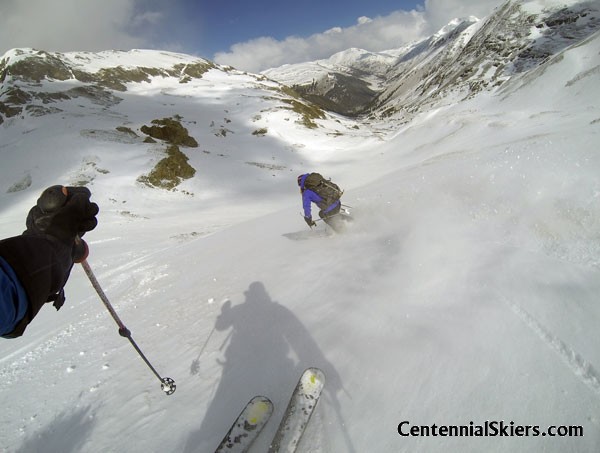 Schussing through the new snow behind Christy in Burns Gulch. 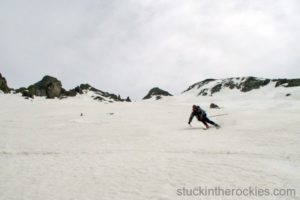