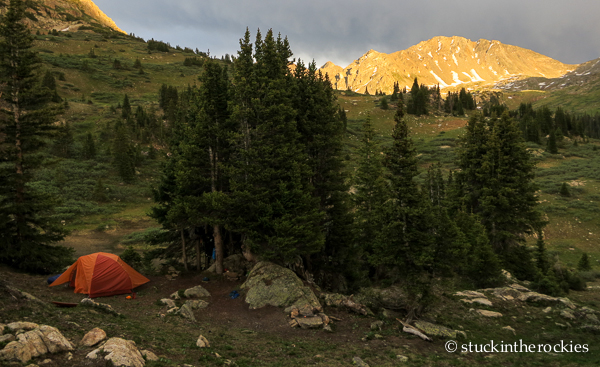 It has been unusually hot and very crowded around town, so we decided to escape on a little camping trip last weekend. And whereas we often seek solitude in far away places, we took a chance on a local spot where we’ve always wanted to camp, up by South Fork Pass.

Accessed from the highly popular Lost Man Loop, on the Aspen side of Independence Pass, South Fork Pass is a mellow, 12,000 foot saddle between the Roaring Fork and the upper Fryingpan basins. Even though the Lost Man Trail sees a lot of people, because the pass is a bit further up the valley, we hardly saw a soul. 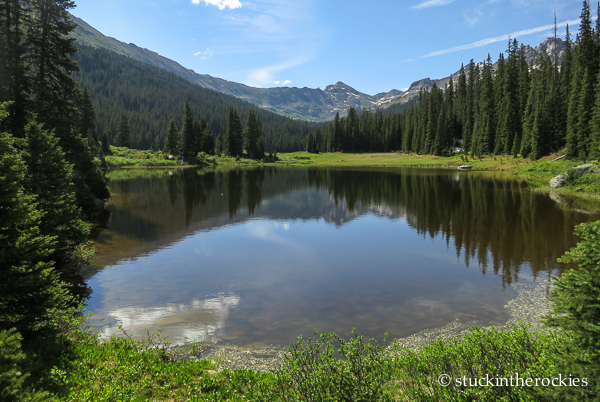 Deadman Lake, looking very much alive. Not sure on the history of that name. 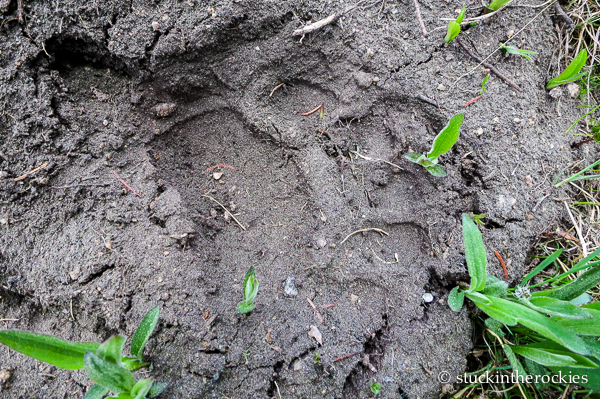 An area local was on the route just before us.

Better yet, just to the west of South Fork Pass are the Williams Mountains, a sort-of micro range of Colorado in the Hunter-Fryingpan Wilderness that frames the headwaters of Hunter Creek. The Williams are made up of a half dozen summits that we’ve long gazed at but never climbed.

So we packed in the four-plus miles to a sweet camp spot Friday night. Saturday morning we descended the north side of the pass to Deadman Lake, and headed up a nameless valley to climb the central Williams Mountain, 13,382 ft., from the north. It proved to be a fun route with an airy finish and just enough exposure to be exciting. From the summit we could see down the long Hunter Creek Valley to the west, practically back to Aspen and our front door. We descended to the east though, down past Sioux Lake and back to camp. 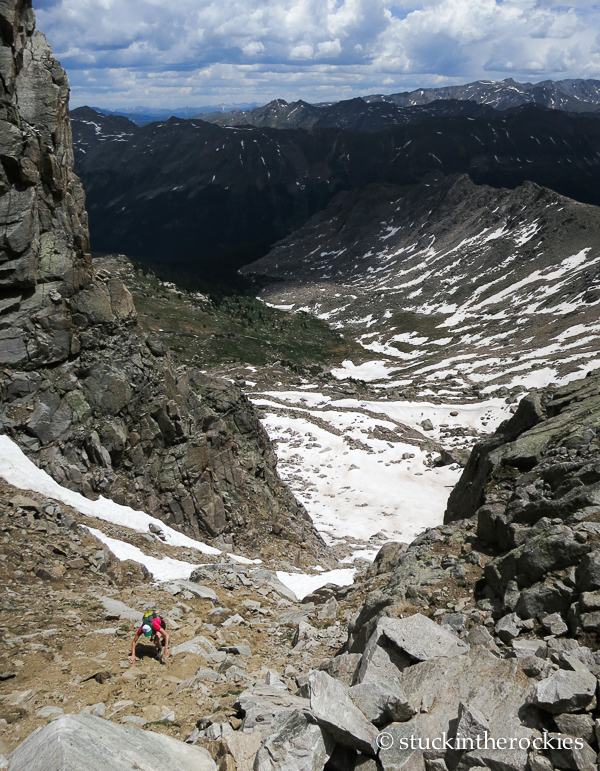 Christy in the gully on the north side of Williams Mountain. 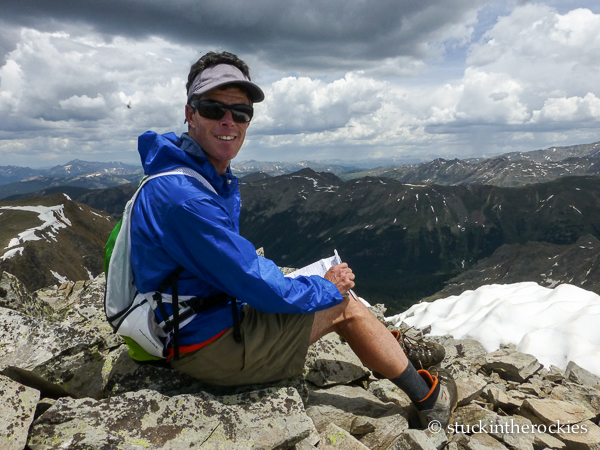 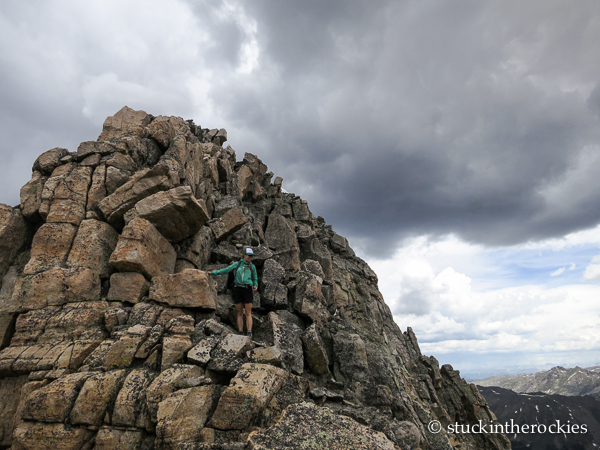 The upper stretch was better climbing than the lower gully.

Sunday we climbed the second highest peak of the group, Williams South “A” (13,312 ft.), from near Scott Lake. Afterwards, we packed up and headed back to town which was bursting with summer 4th of July visitors. It was a fun couple of days out there, away from the people and high enough to be out of the heat. Plus it was a treat to finally get up on some these backyard peaks.

A panorama looking east from Williams. Click for the enlarged view. Our camp was at the base of the round summit in the center foreground. 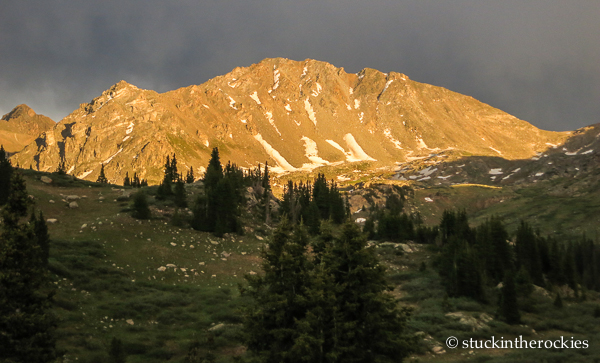 The northernmost Geissler Mountain, illuminated in the setting sun. 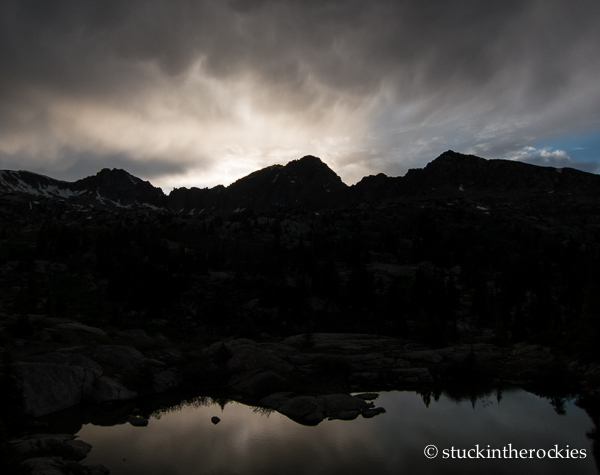 And looking the opposite way, towards Williams Mountain and some ominous clouds. Time for some rain, it’s been too hot. 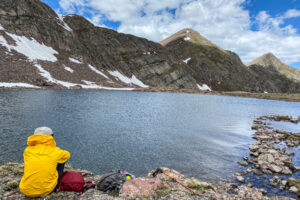 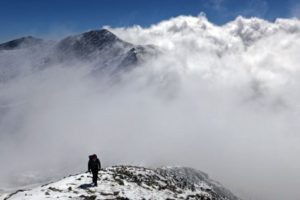 On the South Ridge of Lakes Peak.

Call it a season

On the South Ridge of Lakes Peak. As exciting as[...] 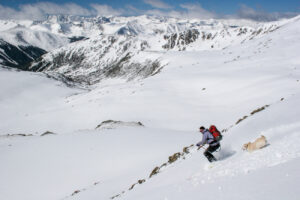