After the snow has melted and summer is in full swing, one of our favorite types of “long day” efforts in the mountains are ridge walks. Whether it’s a long, broad ridge with little technical challenge, or a more complex route that might require helmets and ropes— it really doesn’t matter, they’re all fun. There’s just something about being up high all day and traveling on terrain usually reserved for the mountain goats. Recently we explored one of these high routes, one that some locals call the Mount Boddington Ridge.

Back in the spring, Christy and I and our friend and frequent ski partner, Chris Davenport, skied a high 13er above Fryingpan Lakes called Deer Mountain. You can read the trip report here. The route we followed to and from Deer Mountain had us traveling under a long, serpentine ridge the entire day. It didn’t take long for us to agree that we needed to return to the area and try to cover it on foot.

Sometimes those plans never come to be. But in this case we found ourselves organizing our things to attempt the ridge just a couple of months later. We made the drive up the Fryingpan Valley to the end of the 505 road and set up camp at the Fryingpan Lakes Trailhead.

Not that we needed additional reasons to explore here, but the view from the nearby Betty Bear Hut is dominated by Mount Boddington, 13,221 ft. After so many years of visiting that hut, including numerous trips there as part of Hut Run Hut, it was time to finally go and try to stand on top of it.

According to the map, the ridge measured out to be about 7 miles long. Our plan was to ascend and traverse the ridge from north to south, following it as far as we could. If the terrain was reasonable and the weather wasn’t an issue, we hoped to make it all the way to the remote pass between Fryingpan Lakes and the North Fork of Lake Creek. From there it looked possible to descend from the ridge and follow the Fryingpan Lakes Trail back down to the trailhead where we started.

The day would total about 15-16 miles with around 5300 vertical feet of gain.

We started early, hiking through the forest and up the trail-less shoulder to the ridge. After about an hour we broke treeline and caught our first view of Mount Boddington.

The technical difficulties of the ridge were unknown to us, but we figured from looking at Mount Boddington that it could be the crux of the whole day. Luckily, the steep face of the mountain you see from afar can be avoided on its west side, and before long we had found our way to the summit.

The ridge beyond Boddington was much harder than we expected. Most of the terrain was talus, which can be tiring after several miles. And we regularly found ourselves cliffed out and needing to backtrack to find an alternate route around steep sections.

Clouds and weather built up around us but never threatened us directly. So we kept moving. Eventually we made our way over a whole slew of 13er summits, including “Mount Wayah” and PT13,300B. Despite ominous clouds and distant thunder, we made it to the end.

We descended through some cliffs to the trail in the valley below and began the long 8 mile exit back to the trailhead.

Eleven hours after starting, we closed the loop. The ridge was really cool, it generally fell in the 2nd-3rd class climbing range, with an occasional 4th class move or two. It worked out to 7 miles up high on the ridge, and we were fortunate that the weather held out long enough for us to complete it. The hike out was pretty arduous though, often trail-less and soggy from snowmelt. But the flowers were in full bloom and the time passed quickly.

In typical mountain fashion, completing the ridge didn’t provide any sense of closure. As the day progressed, we took note of 5-6 other similar ridges we discussed wanting to explore. We may not get to them soon, but we’re going to have to add them to the list. 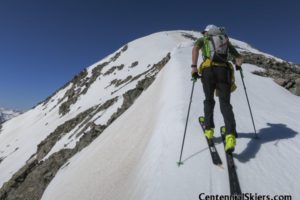 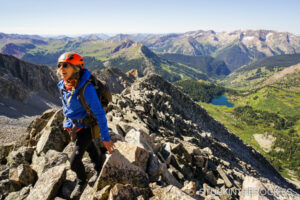 Partway up the S Ridge on Snowmass Mountain.

The S Ridge on the west side of Snowmass Mountain might be our favorite route on that 14er.