We set out on an ambitious mission— to traverse the Weminuche Wilderness and attempt to climb and ski five Centennial summits along the way.

At 500,000 acres, the Weminuche Wilderness area in the San Juan mountains is Colorado’s largest and many of the peaks require exhaustive approaches (the Maroon Bells / Snowmass Wilderness is 181,000 acres just to compare). Compounding the access challenges is the fact that many of these mountains only offer complex, if not technical climbing routes. In summer these peaks present formidable challenges to climbers. Add snow, and the goal of skiing off summits and it all quickly becomes daunting in scale and variables. 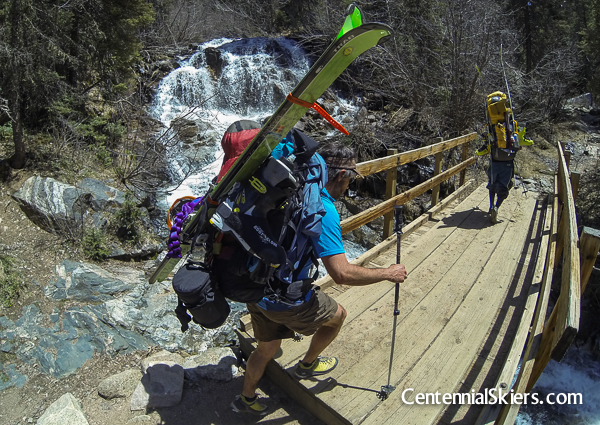 These packs didn’t exactly fit the “light and fast” category we prefer. 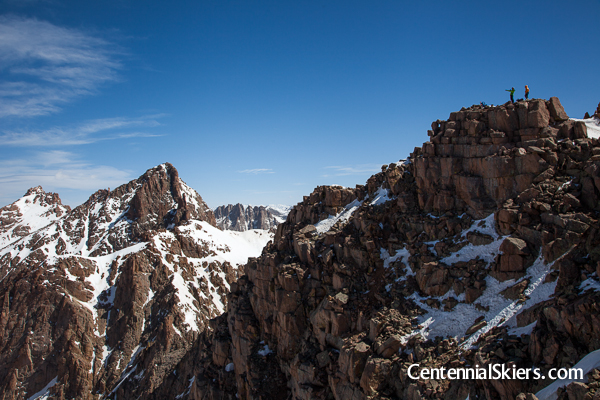 We began the traverse at the Needleton trailhead and caught a gorgeous day up on Jupiter. Dav and Sean seen here, with the 14ers Windom and Sunlight to the left. 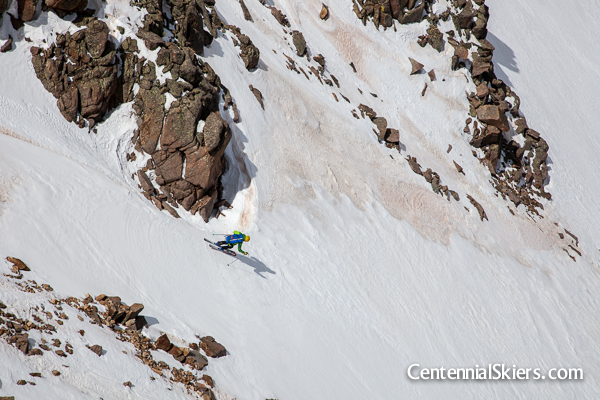 It was an easy ski off the summit.

Christy, Dav, Ian Fohrman, Sean Shean, and I started on this traverse knowing it would be a huge effort to both ski these rugged and remote mountains while at the same time progressing along the traverse route. The weather, snow conditions, and all the small details would have to go exactly according to plan if we hoped to have even a small chance of getting it all done.

So as is often the case, the mountains had the final say on how it would all proceed, and early on we were forced to adapt to adverse wind and weather. We adjusted our goals accordingly and five days after starting, we had traversed the heart of the Needle and Grenadier ranges of the Weminuche, and skied two Centennials along the way— Jupiter Mountain and Vestal Peak.

The five Centennial summits that reside in the heart of this vast wilderness define this ski project. Their remoteness combined with the technical challenges presented by a few of them are clearly the crux of the Centennial Skiers project. 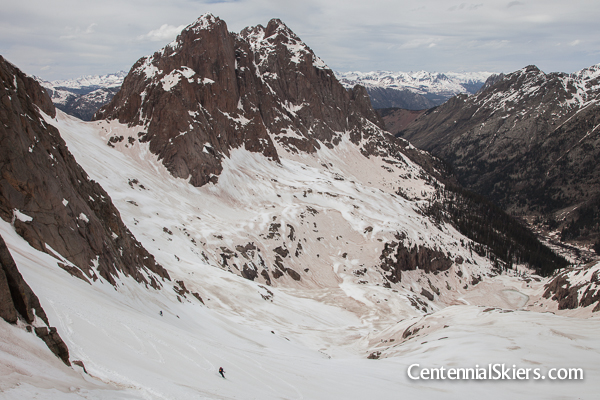 Skiing from Needle Creek down into Noname Creek, in the direction of Pigeon and Turret peaks. We camped above the frozen lake seen below. 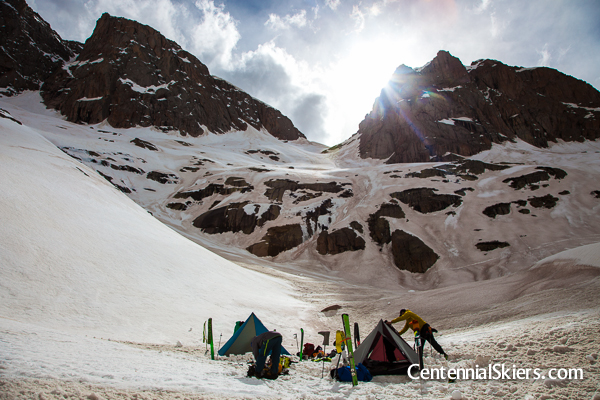 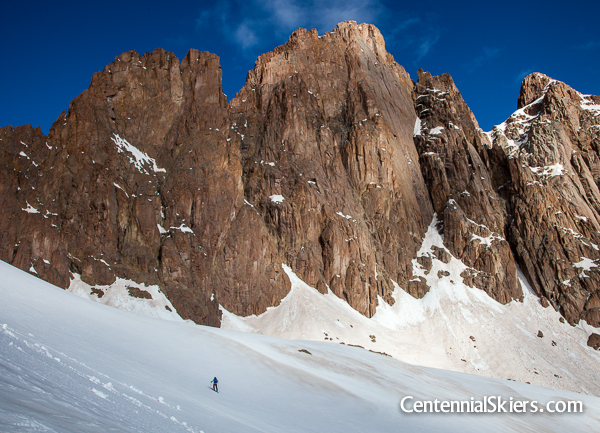 The following morning we headed up and over into Ruby Creek. Dav, seen here, below Monitor Peak’s huge East Face.

Check out the conditions on the saddle between Pigeon and Turret. Weather was approaching and the winds that preceded it were too much to safely climb Pigeon and Turret. A pair of skis on a backpack would act like a sail and it was an obvious call not to go any higher. 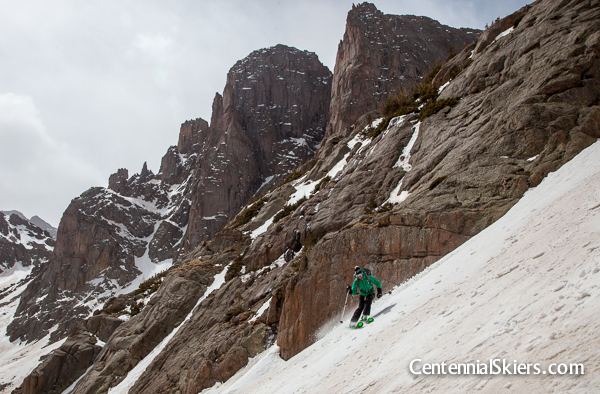 After accepting the conditions and being aware of the approaching weather, we headed down from the Pigeon/Turret saddle and back over the pass to our camp. We had to move towards Jagged if we were to stay on schedule. 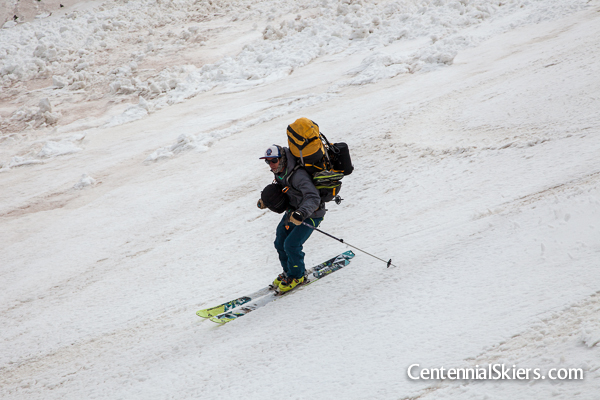 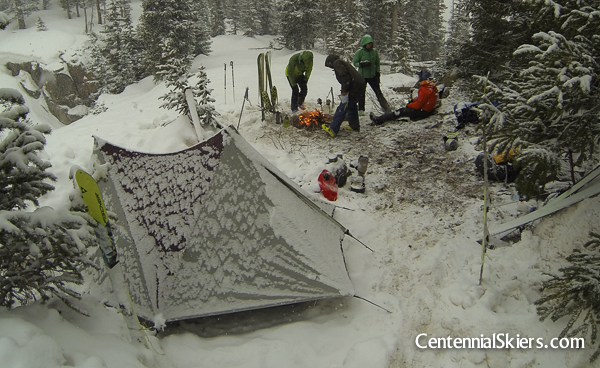 After hauling ourselves and our gear up to our Camp Three, below Jagged Pass, the forecasted storm arrived and left 4-5 inches of snow on the ground. The next morning we had planned an attempt on Jagged. 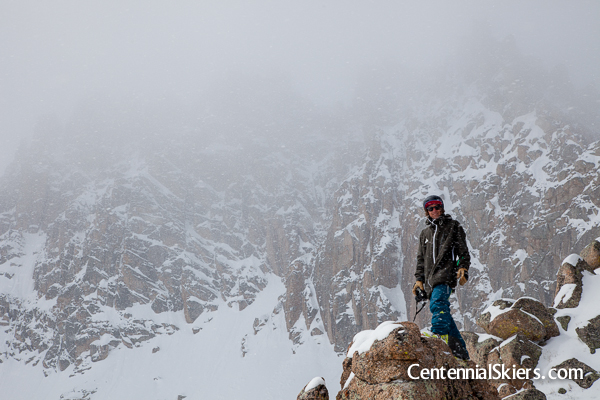 We moved up to Jagged Pass in the morning, but in-and-out weather and new snow made the route (seen behind Ian here) too challenging and we’ll have to come back for another attempt. 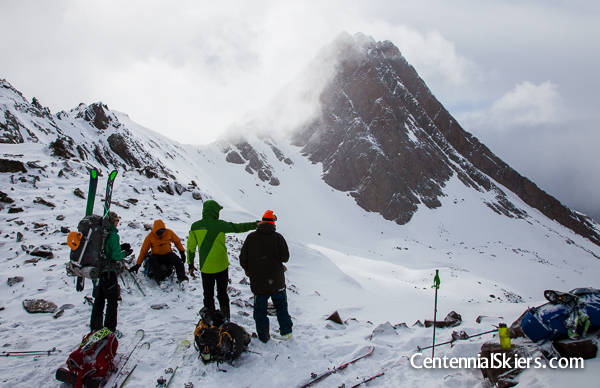 We made a huge move from near Jagged Pass to Vestal Creek. We needed to get in a good position to be able to both attempt Vestal Peak and ski out to catch the train that afternoon at Elk Park. 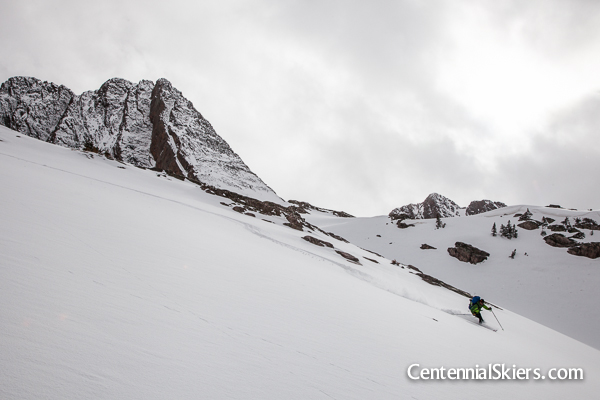 Following the traverse from south to north we caught some good snow on the descents from the passes. Dav, seen here, descends to Vestal Creek in front of the Wham Ridge. 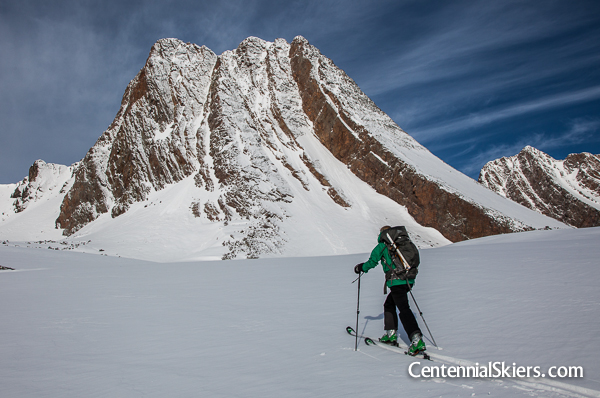 The following morning (Day Five) was gorgeous, and we had an incredible time climbing and skiing Vestal Peak. 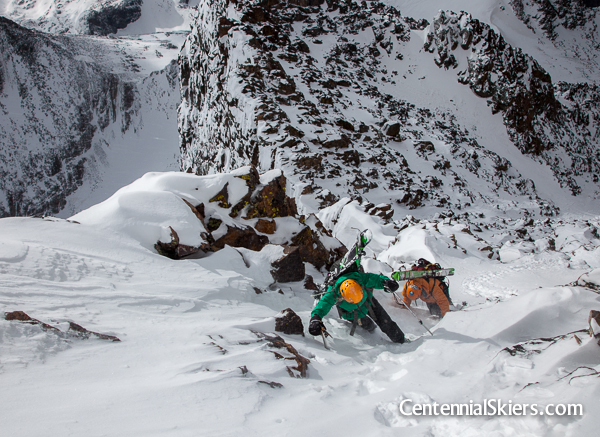 The only route skiable from the summit is on the mountain’s south side, which was pretty spicy. 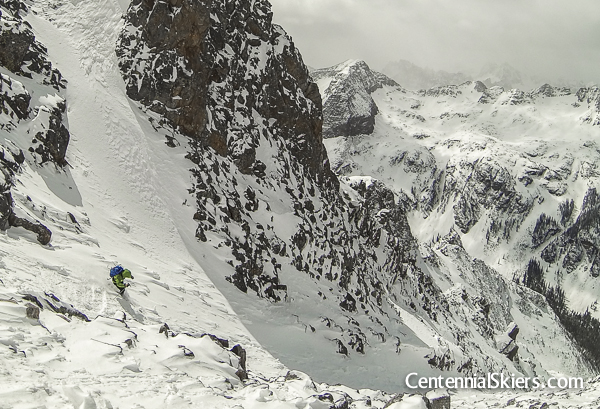 Dav in the narrow South Couloir. 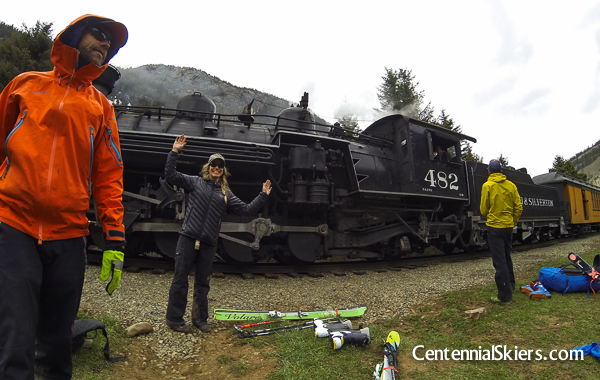 And with a big hustle, we made it out to the train with 20 minutes to spare! What a trip.

We’re all still in awe. The experience was memorable and fun, and at times incredibly challenging. It left us all impressed and inspired. We’re excited to return for the remaining three summits— Pigeon, Turret, and Jagged— though that may not happen until next year. That’s OK with us. Any opportunity to return to this awesome area of Colorado is welcome.

Trip reports for Jupiter and Vestal will be up soon. 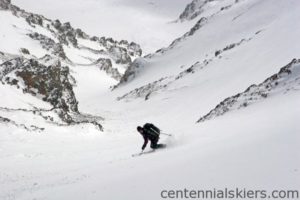 The south facing Edwardian Couloir on the 13er Mount Edwards make for a sweet backcountry ski in the Front Range mountains of Colorado. 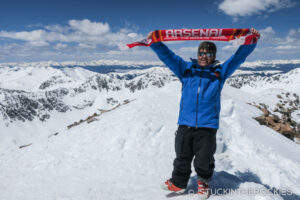