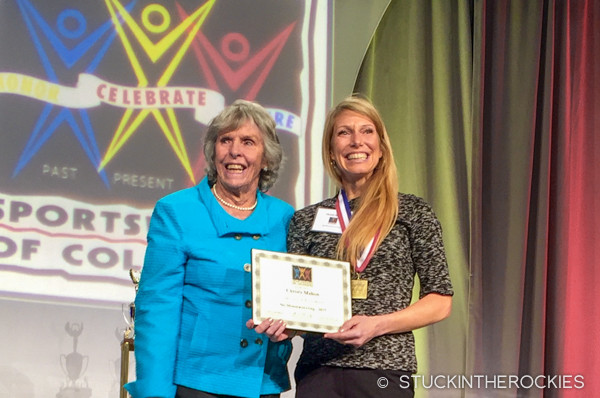 After finishing skiing Colorado’s 14ers in 2010, I had the incredible honor to be nominated for a Sportswomen of Colorado award. That spring I was able to attend their annual awards celebration in Denver honoring Colorado’s outstanding female athletes for their performances that year. So when I was nominated a second time this year for my achievements in ski mountaineering, I knew this was not a night to be missed. 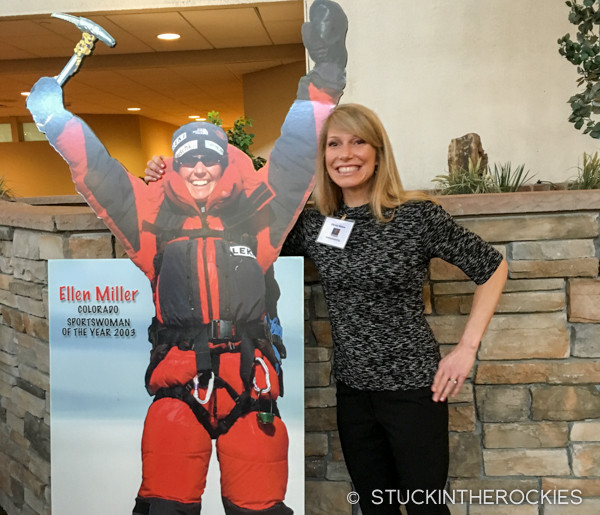 Posing with 2003 winner, friend, and role model Ellen Miller. The reception is filled with stories and photos of each winner since 1974.

The annual awards dinner is one of the most exceptional and inspiring “girls nights” that you can imagine. Founded in 1974 by the YWCA to promote and empower Colorado girls and women in sport, Sportswomen of Colorado is recognized as the first community-based organization in the county to honor women athletes at the state level. 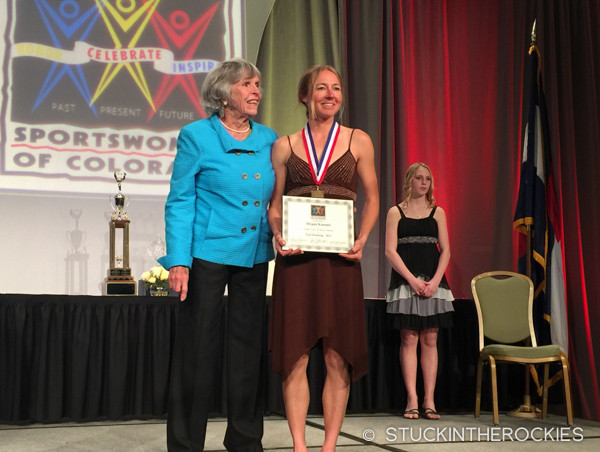 Friend and trail runner, Megan Kimmel was there to receive the award for her top finishes around the world last year in trail running.

During the evening, Denver female sportscasters Marcia Neville and Susie Wargin award 45 exceptional girls and women for their accomplishments in categories that range from lacrosse, running, skiing, to awards for perseverance, empowerment, and spirit. Ages span from 16 to 80, including Dorothy Mauk, now in her 80s, who was a true pioneer for women in sports writing in the 60s. 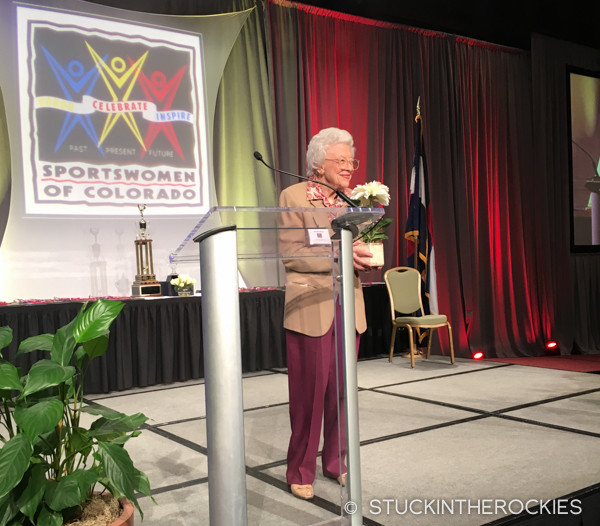 Joining the Denver Post staff as a full-time member in 1966, Dorothy Mauk was thought to be the first female sportswriter working for a major metropolitan newspaper.

There are phenomenal young women who are just launching into their lifelong journeys, and some who have achieved greatness and are now giving back as coaches, mentors, and role models. It is impossible not to leave at the end of the night inspired by the stories of determination, hardship, and grit. As 16-year old awardee, Tess Johnson (youngest mogul skier ever to be named to the U.S. Freestyle Ski Team) said, “Its not how you fall down, its how you get up”. 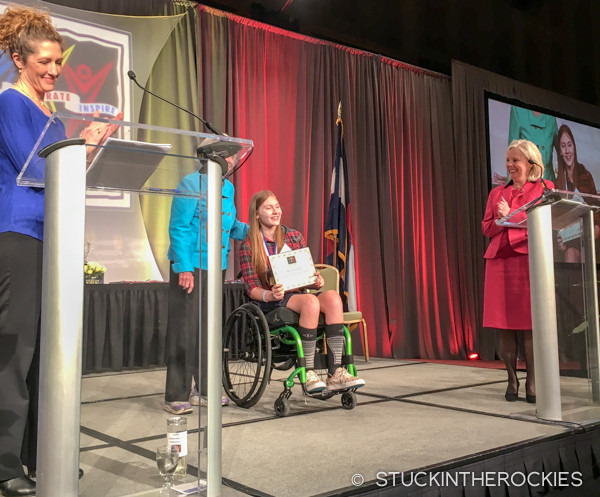 Kaitlin Forsberg, a high school student from Eagle, accepting the Swede Johnson Spirit Award. Kaitlin crashed last April at the National Freeskiing Championships at Copper Mountain, which paralyzed her from the chest down. She was given the award for her determination to regain her life as an athlete.

Each year the winner of the prestigious Sportswoman of the Year Award is announced at the banquet, and for the second year in the row Mikaela Shiffrin took home the well-deserved title. But it had to have been a hard choice. 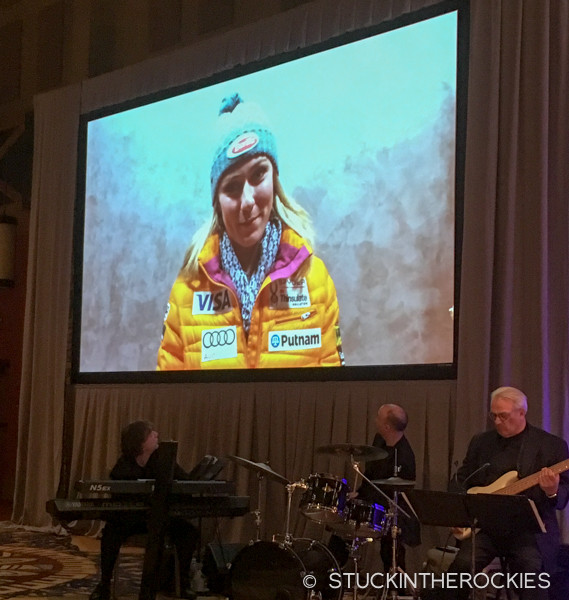 Mikaela Shiffrin, this year’s overall winner, made the effort to accept her award as Colorado’s Sportswoman of the Year from Europe. 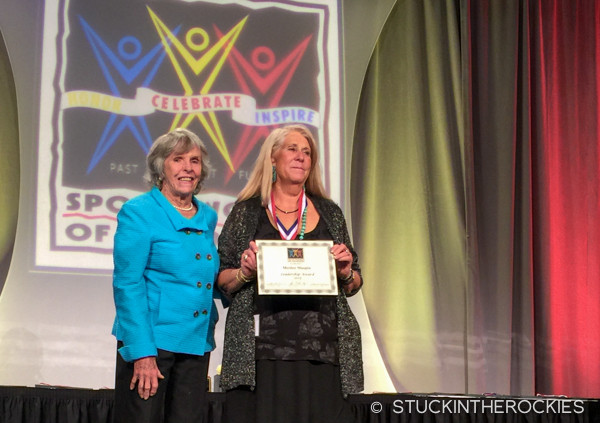 Merilee Maupin founded the Leadville 100 Race Series and was honored with an award for Leadership. 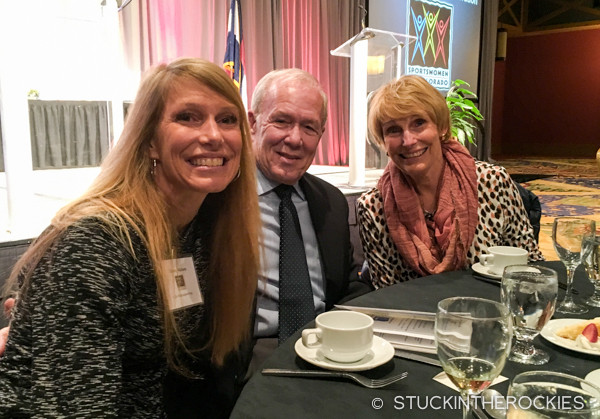 Lucky to be able to enjoy the evening with my parents, Lynn and Rick Sauer. 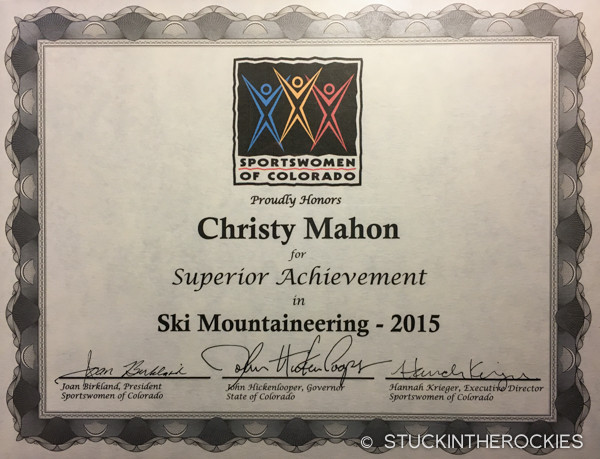 The Sportswomen of Colorado award.