It was time to make a trip down to the Sangre de Cristos. For years now, we’ve been exploring the valleys and peaks of this mountain range via backpacks, trail runs, and peak bagging missions. This time our goal was to hike up Macey Creek, set up a camp at Macey Lakes, and climb some of the nearby summits.

Macey Lakes is accessed from the town of Westcliffe, on the east side of the range. It’s a pretty big effort to get in there, but it’s worth it. The three alpine lakes that make up Macey Lakes are beautiful. The summits that frame the valley include Colony Baldy and Obstruction Mountain, two of Colorado’s Bicentennials, as well as several other unnamed 13ers.

So after we made the big morning push up to the lakes, we setup camp and grabbed only what we needed for an afternoon jaunt up Colony Baldy. The weather forecast called for some storms but it was still pretty nice out and we figured we should give it a go.

We hiked to the upper lake and then up a massive talus field to the easy southwest ridge of the peak, reaching the top just as the clouds started to build. The Crestones and Kit Carson group made for a pretty dramatic backdrop, and the flowers were in full bloom.

We caught some rain on the descent but nothing too bad, though it did require a little drying out of our clothing and hiking boots by the campfire.

The next morning we hiked up past the third Macey Lake, to the ridge that connects Obstruction Peak and Mount Adams. There are a few unnamed 13ers up there with incredible views of the neighboring summits. Some low cumulus clouds were moving through the area too, which added to the experience (and the photos).

After getting up Point 13541 and neighboring 13517, we walked the Little Baldy Ridge back down to camp, packed our things, and headed home. It was another worthwhile weekend exploring the Sangres. 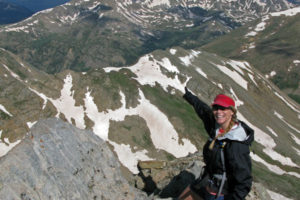 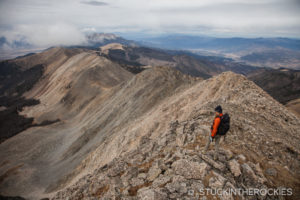 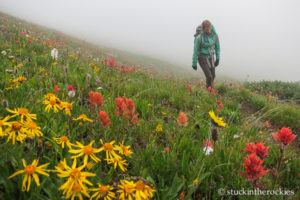