On the west side of Snowmass Mountain there’s a beautiful, long, serpentine arete that ascends from above Geneva Lake to the mountain’s summit. It’s known as the S Ridge. It isn’t one of the two primary routes listed in guidebooks or online as a common way to climb Snowmass Mountain. But it is a route that garners attention in the conversations among well-versed 14er climbers.

Despite romping around the Elk Range 14ers for years on all routes and during all seasons, we had never climbed the S Ridge. After a recent spring trip to the area to ski “Siberia Peak”, Christy, Chris Davenport, and I found ourselves making plans to finally check it out.

The east side of Snowmass Mountain always feels like the more popular way to approach the mountain. It’s done as an overnight, requiring an eight mile backpack into Snowmass Lake where you camp for the night. The setting is stunning so it’s no wonder it’s popular.

But if you don’t want to haul the heavy packs that far, the west side of the mountain is more easily accessed from near the town of Marble. And if the S Ridge is your goal, then that’s the way you go.

The three of us made the trip in towards Geneva Lake with the overnight packs, and we setup for the night. We opted for a more remote perch away from the lake. We had awesome views of the valley and the S Ridge itself.

The following morning we made the approach to the base of the ridge. It’s most easily accessed via one of two gullies that come into view as you near the route. From afar they appear to be miserable loose rock gullies. In reality they weren’t all that bad, we had no problem climbing up through them to get on the S Ridge.

From there it was a pretty straightforward ridge scramble. Most of the big granite blocks were firmly in place. Compared to the looser shale of the Maroon Bells, we found things to be much more fun and secure. The technical difficulties never really got harder than Class 3.

The ridge itself is quite long and it has a good amount of exposure, the kind that’s problematic if there were any approaching T-storms. If the forecast called for any weather it might be worth postponing for a better day. It’s not a place you’d want to be if there was any lightning in the vicinity.

Once on the summit, take in the views. Snowmass has always been one of my favorites. With Capitol to one side and the steep North Face of Hagerman Peak to the south, it’s a really cool perch.

When you’re ready to descend, locate the standard West Face route and begin down.

If you’ve been climbing 14ers for a while and realize you like the more challenging “scramble” routes, and you don’t mind exposure, definitely put the S Ridge on your list! 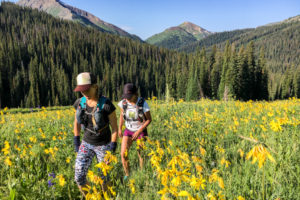 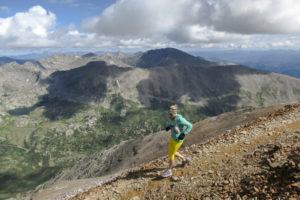 My first ski descent of the North Face of North Maroon Peak back in 2005.