Sayres Benchmark has one of the best north faces for skiing in the Sawatch Range. It isn’t as widely known as some mountains because it sits in the shadow of neighboring 14ers, and is unmarked on many maps. But Colorado ski mountaineers in search of a fun, late season couloir all eventually end up exploring Sayres at some point.

Anyone who has followed the summer hiking trail up La Plata Peak from Highway 82/Independence Pass has gazed at Sayres Benchmark at the head of La Plata Gulch. It’s hard not to take note of the nearly 2000 vertical foot north face.

We consider this north face to be at the top of our list for ski options in the Sawatch Range, alongside other classic north lines like Tabeguache, Cronin, Missouri, and of course La Plata Peak.

This trip to Sayres Benchmark was in late April, and the timing was nice because the snow hadn’t melted much, yet. We were able to start skinning pretty close to the parking area on Highway 82. A lot of Aspen friends wait to ski Sayres until late May when Independence Pass opens, and by that point much of the valley snow is gone and there are some brutal willows to contend with. Consider that, and choose your own adventure.

Follow the La Plata summer trail until you reach the high valley where the angle mellows out. From there, the summer route climbs to the east, towards the NW ridge of La Plata. Don’t ascend to the ridge. Instead, leave the trail and just follow the valley south, whatever way is easiest. Sayres will appear in the distance.

As you get closer the angle will start ramping up. Skin until it steepens and you have to switch to crampons. Follow the prominent couloir all the way to the 13,738 foot summit. Retrace your route of ascent, or if you want a spicier ski run, consider the “X-rated” couloir (more info here).

It’s really easy to retrace your route down the valley and back to the trailhead. Have fun! 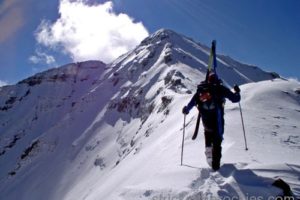 At the saddle, en route to the summit.

It’s amazing what a good day you have up in Montezuma Basin in October. Since Dirk and I were headed out on a climbing trip to Ecuador in a week or so we wanted some time up high. A bluebird day with easy skiing snow greeted us.