Making sense of the dust on snow phenomenon

The transformation of the Roaring Fork Valley each spring from its dormant winter state to an awakened living environment is a beautiful thing to witness. Birds arrive, the creeks start flowing, the trees bud— everything comes to life. This year, as the valley slowly morphs into its green, verdant state, the little snow that remains on the nearby mountains is brown.

Most would agree the 2021-22 ski season was a good one. But, unfortunately, it ended with multiple dust events. On several occasions at the end of the ski season, the new snow we received from spring storms was accompanied by a considerable amount of airborne dust and dirt.

This type of weather phenomenon occurs every year to varying degrees. Sometimes it’s an isolated, barely noticeable event. If it’s early in the season, it can be buried deep in the snowpack and is less of an issue.

This year, Colorado experienced repeated dust events late in the season that were more severe than usual. By mid-April, the snow on the mountains around Aspen was visibly brown.

From a skier’s perspective, the dirty snow is impossible to ignore. Not only is it unsightly, but it changes the snow surface. It adds resistance — on steeper slopes, you can feel a drag, and on mellower angles, it can stop you in your tracks.

The water percolates through the snowpack or is lost to evaporation as the surface snow melts. However, the dust remains, consolidating into a more distinct layer on the surface.

Subsequent storms can bury this surface dust layer, which can be problematic for stability. Buried dust layers have been blamed for fatal spring avalanches here in Colorado.

As the spring progresses, the surface dust layer becomes more concentrated. The darker surface absorbs even more solar radiation, accelerating the rate of snowmelt. That can effectively end the backcountry season much earlier than usual.

But the consequences of dust on snow go way beyond simply drawing the ire of the outdoor community. The mountain snowpack is a water storage reservoir in itself, and its accelerated depletion has broad-ranging ramifications across cities and states throughout the western U.S..

My friend Jeff Deems is well-versed on the topic. In addition to living in the valley and being a backcountry skier, he’s a PhD and research scientist at the National Snow and Ice Data Center at the University of Colorado, studying mountain snowpack dynamics.

Albedo is a scientific term to measure and describe the proportion of light or radiation that is reflected by a surface. Highly reflective surfaces have a high albedo. Darker surfaces have a lower albedo — they reflect less and absorb more incoming solar radiation.

Fresh white winter snow has a high albedo. According to Deems, who has been measuring albedo since 2006: “With winter snow you’re getting 98% of the visible wavelengths reflected by the snowpack. And a dusty snowpack like we’re seeing right now in the San Juans, 33% albedo was just measured. So that means that 66% of the incoming sun is getting absorbed by the snowpack.”

His research has demonstrated that dust is a significant contributor to melting — considerably more potent than the air temperature. He estimated that the snowpack will be gone a month or more earlier than usual this year just because of the dust.

While that is disappointing for the outdoor community, it’s a serious concern for water managers in cities and states across the west. While this year has been particularly bad, Deems noted that this phenomenon has been taking place for some time.

”Some colleagues have been using lake sediment cores from the San Juans to look at annual dust deposition. And there’s a marked uptick in the amount of dust coming into Colorado from the late 1800’s. So commensurate with the expansion of European settlement in the Western U.S. and the introduction of large numbers of grazing animals really disrupting the soil crust out in the Colorado Plateau, leading to greater dust emission.”

“And we’re seeing that continue. And now it’s not just cows and sheep, but oil and gas exploration and other development and recreation and all kinds of things. And lately, climate change is really having an impact with the persistent and worsening aridification of the landscape.”

Aridification is the process of a region becoming increasingly dry over many years, leaving the ground more prone to erosion. When you combine that condition with various types of surface disturbances, all that’s needed is some wind and weather to stir it all up and you get airborne sediment in the atmosphere.

So why not just trace the source and mitigate the dust? If it originated from a single location, that might be an option, but the fact is it can come from all over.

I still recall the first time I saw dust on the snow on Aspen Mountain in the late ’90s. Then, rumors swirled in gondola conversations that the sediment that turned the moguls brown originated from a Mongolian dust storm.

Jeff said it couldn’t be ruled out. “We do get dust out of Mongolia, by the time it makes its way over here, it’s pretty much just a super fine stuff. It can impact the snow. But when you look out and see brown snow, that’s local, or that’s regional dust from the Southwest.”

He went on to say, “Typically, the southwesterly is the main dust producer. But we can get the dust out of the Great Basin in Central Utah as well— on a more westerly trajectory. Those tend to produce more of the grays and yellows. When it’s the rust to deep red, that’s typically Colorado Plateau via a Southwesterly.”

Even though we know where it’s originating, mitigating the dust across such a vast area isn’t practical. The only thing water managers and the outdoor community can do is hold onto hope that the drought conditions gripping the west improve and the aridification process slows or even reverses. Increased moisture leads to increased vegetation, which can help the soil recover and keep the dust and sediment on the ground and out of the air.

When you understand the seriousness of the larger issue, it can feel petty to complain about its effect on the ski conditions. Deems admits that it’s pretty shallow to view this increasingly dire issue solely through the narrow prism of how it affects the snow. And yet, he insists that the visceral experience of skiing on dust serves as a good entry point for conversations within the community about this much bigger problem.

That makes a lot of sense. The outdoor community is often a first-hand witness to changes in our environment. So if lackluster snow conditions lead to conversations about the more severe issues occurring before our eyes, that’s a good thing.

In the meantime Deems still hopes to ski Sopris this season, if he can get up there before all the snow melts away.

This story originally ran in the Aspen Times Weekly on May 19, 2022 – read it here.
Listen to a radio interview on the topic with Aspen Public Radio here. 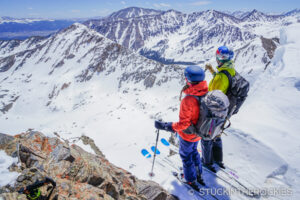 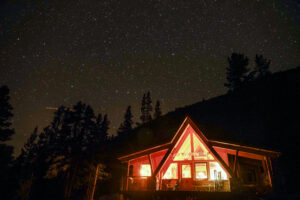 A new twist on the annual Christmas Tree outing.