Mount Democrat, 14,148 ft., is one of the more easily accessed 14ers to ski in late spring. In late April and May the road is often clear of snow from the town of Alma all the way to 11,400 feet. At that point you only have a short stretch of snow-covered road to reach the normal summer trailhead at Kite Lake.

That makes skiing this south and east side of Mount Democrat one of the more straightforward routes out there.

In the case of our trip here in 2018, Christy was looking to ski a 14er with her friend Elsie Weiss. Their relationship began years earlier as part of a mentorship program (read about it here), and they have been trying to ski a different 14er each spring.

They extended an invite to me, and along with Rebecca Weiss (Elsie’s mom), the four of us set out to ski Mount Democrat.

After a quick walk up to the Kite Lake Trailhead, we began skinning. We stuck kind of close to the summer trail up what is called the East Slopes route. The snow was continuous but patchy, and we soon found the headwall of the East Slopes be too steep for skinning switchbacks. So we put our skis on our backs and booted up to the summit plateau.

At that point the angle mellowed out considerably, and it was just a short stroll to the summit.

We enjoyed the sunny summit, and retraced our route back down to the Kite Lake Trailhead.

It was a fun, straightforward and safe route. Years earlier I had skied Democrat’s west side down to near Fremont Pass. That was an interesting route as well, but the snow cover was more sparse, and the route of ascent felt a bit more exposed to avalanche. After revisiting this mountain and skiing it from this side, I think I prefer this route. 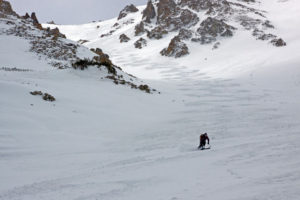 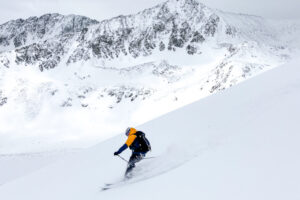