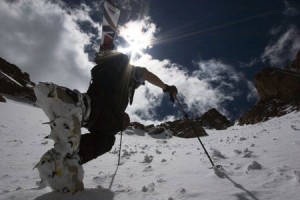 The “Reverse Trailhead” meant we climbed back up after skiing.

It would be a month after Pyramid before I skied another 14er. An eight day trip to Valdez, AK followed by a ski expedition to the tallest peak in Greenland, all sandwiched around buying and remodeling our condo kept me busy when Chris was stepping up his efforts on the 14ers. I was particularly bummed to have been gone when he and Neal skied Capitol Peak, but so it goes.

After his remarkable thirty-peaks-in-spring marathon, or whatever it was, I met up with Chris and his family in the RV near Bierstadt. They tagged out and I drove south with Chris to Pikes Peak. It was fun to hear all the spring stories.

The start was quite casual, picking up coffee in Starbucks before driving to the summit via the Pikes Peak Highway upon its opening that morning. Once parked, Chris and I walked along the north edge of the mountain, looking for snowy couloirs. I actually called Christy from the top of the Railroad Couloir to tell her we might be coming home early (Chris wasn’t nearby to hear), I couldn’t see much skiable snow. But just as Chris’s luck typically had it, he found a line in the area of the Y Couloirs and we were putting our boots on.

The partly shaded, recessed, north couloirs held really good snow for the date, and we managed to make a fun ski of it. Hiking back up from down in the Bottomless Pit cirque was hard, I had been at or near sea level for a few weeks and Chris had been hanging out at 14,000 feet on a daily basis for nearly a month now. He kicked my ass.

Back at the summit we met two guys from the Colorado Springs Gazette, Chris had built up some real momentum by now and had lots of people following his progress. It was cool to see, and while downing some of the lousy doughnuts they are so proud of in the Pikes’ Peak Summithouse, I thought a lot about my 14er ski goals.

In 2005 I made a lame, albeit official ski descent down the west side of Pikes. I was really happy to get the more aesthetic line down the north today, and next week I would go back for another “redo”, this time on the remote Snowmass Mountain.

Chris’s take on the day here. 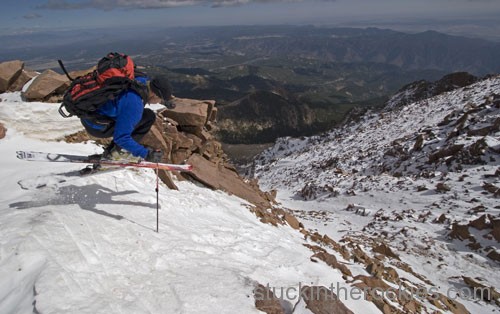 One for the camera- the good coverage began a short distance from the top. 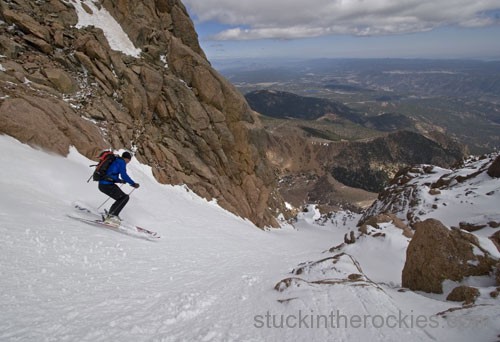 This side of the mountain has some fun, long couloirs. 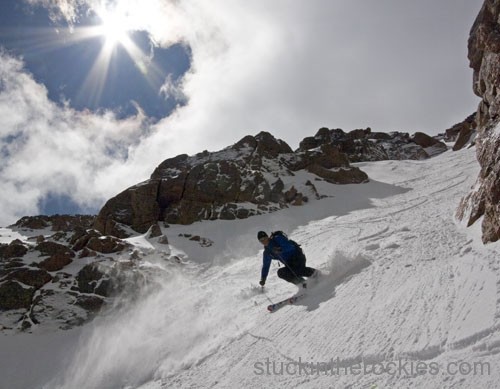 The snow was actually light and wintry. 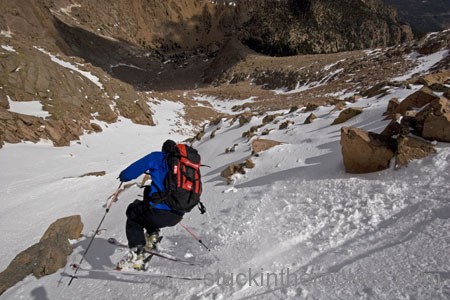 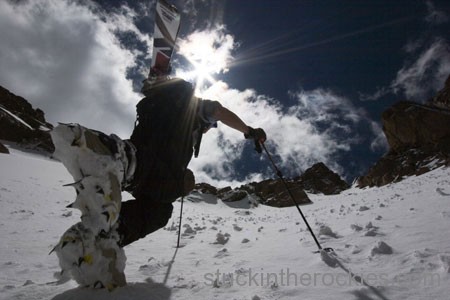 The “Reverse Trailhead” meant we climbed back up after sking. 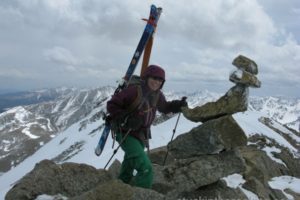 At the true summit, with a precariously perched cairn.