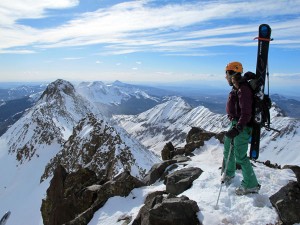 On the summit, after the spicy climb on the north side and after skiing El Diente, seen out in the distance. With all the new snow, it’s a long day of breaking trail to ski both peaks.

The was a big two-fer to pull off. After El Diente, we began to climb up Mount Wilson. The route up the North Face is straightforward until you get right below the summit. That’s where the snow dries up and the skiing suddenly doesn’t seem so reasonable.

For years, much like El Diente, it was considered good to ski from a point just below the summit, from the highest continuous snow. More recently though, skiers have connected snow patches, or billy-goated through the rocks to actually get a true summit descent. And nowadays, that’s the expected standard. So as we poked around below the summit, we decided to just climb to the top with our skis and then decide from there what looked best for skiing, if anything.

After some tricky, exposed climbing on the San Juan loose rock, we made it up the north side of the summit block. In hind sight, it may have been easier to just follow the more standard summer route, a bit to the west.

From the top, a strip of snow led down to the south. It was littered with rocks, but was continuous enough to allow us to click in to our skis at the summit. We could make our way off the top through the thin stretch to more continuous snow below, and then traverse around to the east. After the traverse, to the col between Slate Creek and the basin to the south, we started down Slate Creek– the tricky part was done, we had pulled off a continuous ski descent of one of the more challenging summits.

Since we started at Silver Pick, we had to traverse once again, and then climb up a short way to another col, that allowed us back into Navajo Basin. We skied back towards Rock of Ages Saddle, and then down Silver Pick Basin as it got dark. We finished by headlamp. 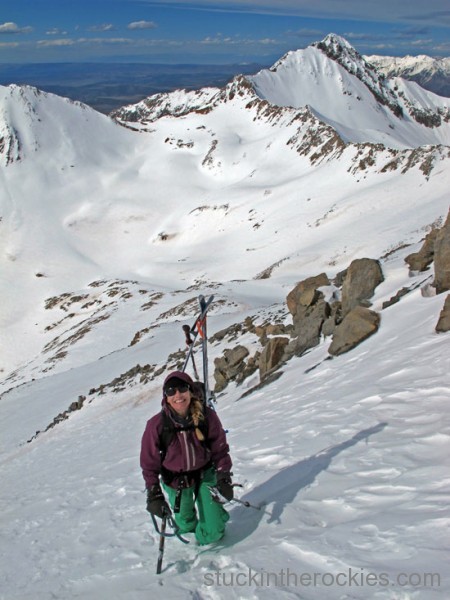 Booting up after skiing El Diente. Wilson Peak and the Rock of Ages Saddle are out in the distance. 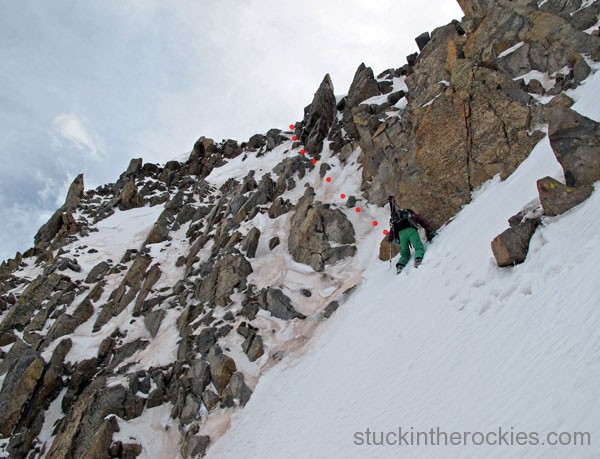 The route we climbed to the summit. I might suggest just sticking to the summer route, or making your way all the way around to the south side, and climb the snow we ultimately skied. 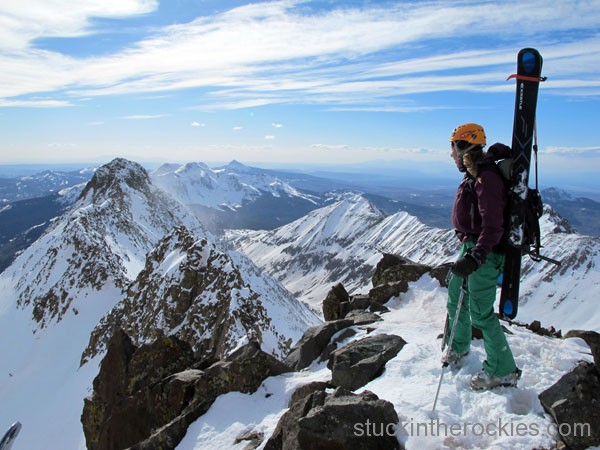 On the summit, after the spicy climb on the north side and after skiing El Diente, seen out in the distance. With all the new snow, it’s a long day of breaking trail to ski both peaks. 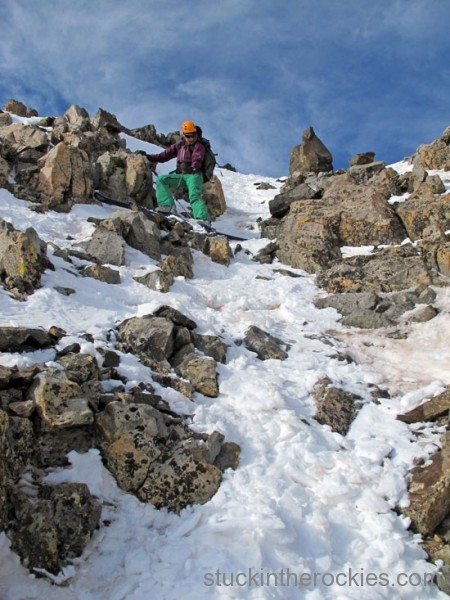 It was a thin strip of snow off the summit. Sometimes that’s just how it is up here. We skied here on May 5th, if you wait too late in May to get up here, this south facing snow is probably going to be melted out. 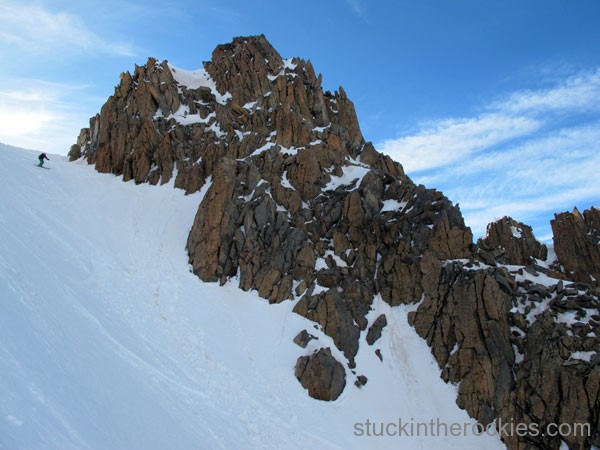 After skiing down from Mount Wilson’s summit, on the backside of the summit in this photo, we made it over the the Col, pictured, and then down. 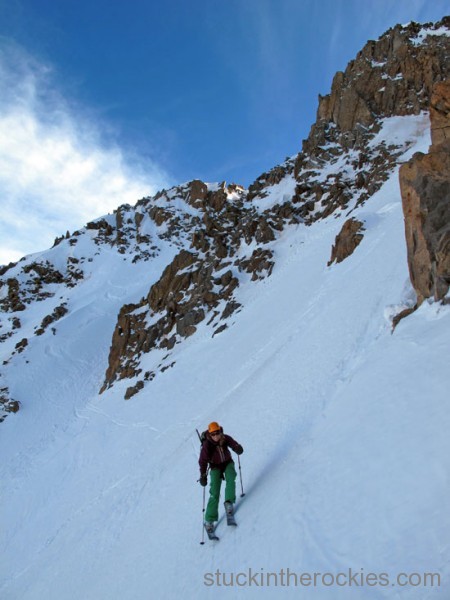 After descending from the Slate Creek Col (up behind Christy in photo), a traverse and short climb got us back in Navajo Basin. 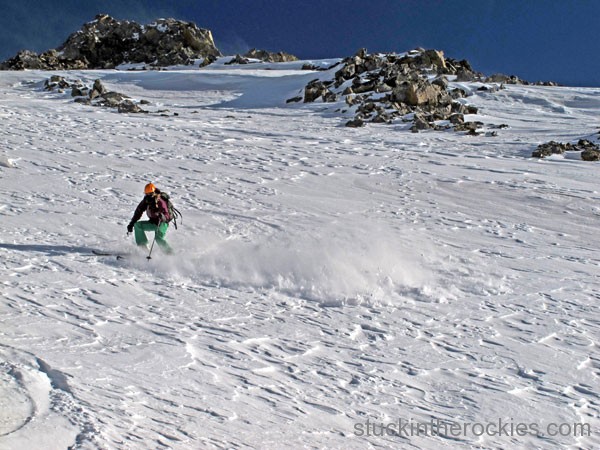 Once back in Navajo Basin, we finally started making our way home. 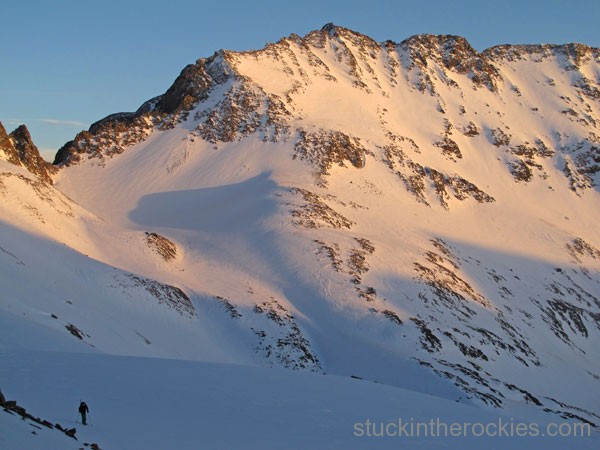 Climbing back up the Rock of Ages Saddle at sunset. We needed headlamps to get back to the truck. 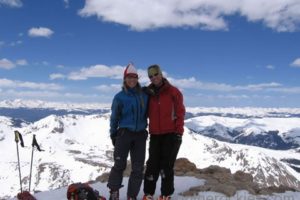 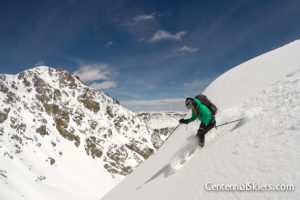